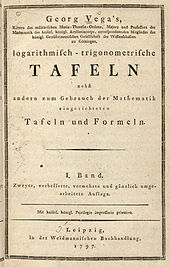 A formulary is a reference book , which specialized in related mostly scientific or mathematical formulas contains. There are in formularies usually no further explanations or evidence presented. In the form of a book or a brochure which serves formulary including as (approved) aids in tests or as a learning tool in the classroom .

There are also early medieval formulas (Latin formularium ) or collections of arithmetic rules such as the Liber abaci , written by Leonardo Fibonacci , who is considered the most important mathematician of the Middle Ages.

In the linguistic usage of the early medieval canons and the papal curia as well as the contemporary legal practice one understands under "formula" (lat. Forma ) a document text for similar cases in which only names, dates and places have to be inserted. Sample texts (Latin: formula ) for letters and certificates are also included. Formulas perceived as exemplary were collected for use in the office and summarized - sorted or disordered: In this case one speaks of a "formula collection" (Latin formularium ).