The triple-walled Contour Fort Maiden Castle from the air 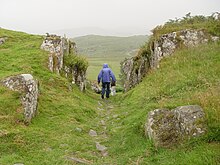 Hillfort is the name commonly used in the British Isles for hill castles . Hillforts are mounded areas that on hills ( hills lie). They can be roughly round, but mostly irregular, ramparts and moats adapted to the geomorphology (then called Coniour Fort ). Semicircular structures placed on steps or on promontories are usually called Promontory Forts or Coastal Hillforts . The plants are mainly found in the British Isles .

Hillforts are a Late Bronze Age and Iron Age phenomenon of the millennium before the turn of the times and, due to their location, can be separated from the much older Causewayed enclusores and the Henges and Raths, which are also provided with ditches or ramparts, or the stone-enclosed duns (ring fort). Many are small and more than 50 percent cover an area of ​​less than 1.25 hectares.

The systems can be located on hills as well as on spurs and on demolition edges. On the coast, they include geomorphic structures in their plan as Promontory Forts . British systems are often characterized by two or more concentric earth walls. Each embankment usually includes a moat, with some hill forts consisting of ramparts alone. Most of the large, multi-walled hill forts have two entrances, although there are examples with one or more entrances. In some areas there are parallel or exclusively stone walls. Especially in north-west Wales there are hill forts with stone walls, which have sometimes been combined with rock outcrops. The majority of the hillforts excavated provided evidence of handicraft activities in oval or round houses in which a variety of materials were found. A number shows buildings that appear to have functioned as temples. Iron or Bronze Age furnaces have also been found. Some large Hillforts represent proto-urban settlements . Earlier interpretations emphasize the defensive character and interpret their construction as a reaction to increasing disputes. In recent years this has changed, and large hillforts (like the nine-gate Brown Caterthun ) are viewed more as manifestations of power between rival elites or as centers of trade. Some were still in use during the Roman occupation.

Many hill forts are clearly recognizable from the plain, others are smoothed and only show up in aerial photographs. Maiden Castle in Somerset is south of Dorchester and is the largest and most famous hill fort in England, covering an area of ​​47 acres . The greatest concentration of this type of plant (around 50 in England) is in the counties of Dorset, Hampshire and Wiltshire.

Examples of Hillforts in the UK

Barry Raftery (1944–2010) examined 40 single and multiple walled systems on the island (around 80 are known) and divided the systems into three classes:

The largest Irish hillforts are:

In Ireland, hillforts are a sub-category of the much more numerous ring forts. The biggest are:

It is possible that some hillforts functioned as meeting places, as is postulated for Teltown, the Hill of Ward in County Meath and especially for the Uisnech in Co. Westmeath . Mythological characters and events are associated with some of the places.

In the plain, earth walls are known as Raths , stone ring systems also as Caher, Cathair, Cahsel or Dun .