This article is about the place to sleep. See also: Vogelkoje or POW camp Koje .

Berths on a naval ship

Double berth in the forecastle of a small sailing ship

The bunk refers to a narrow sleeping area, bedroom or a small storage room on ships of all kinds.

The word probably comes from the Latin cavea "shack, chew, cage", but comes from Dutch kooi "cage, shack, stall" in German. Even a small shed at trade fairs, exhibitions or in warehouses as a separate niche is accordingly referred to as a bunk . In Low German, the meaning “cage” can be found in the bird's bunk , a catching facility on the North Sea coast . Also Danish is koie (bunk) "Schiffskoje" Swedish koja , Norwegian koie but in each case engages the conceptual field barn and is called " hut ". In addition, the meaning of sleeping place is Norwegian køy (e) . 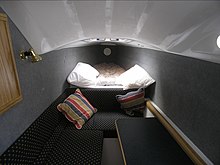 View into the bunk of a sailing boat

A distinction is made between longitudinal berths and transverse berths, depending on whether the berths are installed fore and aft or transversely. The ship's berths are often placed one above the other as two or even three-story bunk beds in the ship's cabin ( cabin ) to save space . Corresponding bunk beds, even in permanent houses, are therefore often called bunk beds.

The lengthways berths deserve a preference for seasickness because they are the best way to compensate for the roll and pitch of a ship. The width of a conventional bunk is significantly narrower than that of a normal bed , i.e. H. between 70 and 85 cm. A raised ledge or a lee sail should prevent the sleeper from falling out. Limited headroom is another expected restriction in comfort .

On old sailing ships, berths already meant comfort compared to the hammocks or nets that were mostly used in the past . In terms of hygiene, however, they were a step backwards, because the poorly ventilated crates were often damp, and mostly several men shared a bunk between shifts and - involuntarily - with numerous parasites , from mites and other annoying insects to rat-sized rodents. As a result, these bunks were also the source and transmission point of numerous diseases, e.g. B. the plague .