Travel or motion sickness , technical terminology and motion sickness (of gr. Κινειν bringing cinema "move"), called states with physical reactions such as paleness, dizziness , headache , nausea and vomiting caused by unusual passive movements, such as in a vehicle or in a Skyscrapers without adequate vibration damping can be triggered. Seasickness , airsickness , space sickness or country disease of sailors on shore leave are known variants. Passive movement in coaches, cars, trains with tilting technology , airplanes, roller coasters can also cause the symptoms . It is characteristic that the drivers of the respective vehicle are almost never plagued by motion sickness.

The same symptoms can also occur in driving and flight simulators and adventure cinemas as well as when playing first-person shooters . The former form of kinetosis is known as simulator sickness ( simulator sickness ); Cases of illness among computer gamers ( gaming sickness or nausea ) are relatively new , especially when using VR glasses ( VR disease ).

In most cases, the symptoms disappear after two to three days at the latest, even without treatment , when the movement stops.

In the preliminary stages, the person affected feels a slight discomfort, slight shivering, cold sweat and a slightly pressing feeling in the stomach area. He looks tired to sleepy and disinterested, reacts more slowly, speaks less, is a little pale in the face. The levels of stress hormones rise in the blood . With increasing travel sickness, cold sweats, yawning, tiredness, drowsiness, exhaustion, mental emptiness, reluctance to work, disinterest up to lethargy , headaches, dizziness , forced swallowing, nausea, heartburn and vomiting arise . Redness, paleness and cold sweat on the face (due to the increased tone of the parasympathetic parts of the autonomic nervous system) can follow. Vomiting brings only brief relief. The gastrointestinal functions are reduced. Blood tests show that stress hormones and ADH are released. The wave-like increasing and decreasing symptoms can last for days. Severe seasickness is accompanied by extreme malaise, vomiting to the point of complete emptying of the stomach (and dehydration if vomiting persists ), severe depression and a feeling of wanting to die. In particularly severe cases, patients even have to be tied down so that they do not jump overboard. In rare cases, motion sickness can cause death in people with cardiovascular problems.

Motion sickness can affect anyone at any stage of their life. Even seafarers who have been sailing unmolested for a lifetime can suddenly become seasick. Everyday experience shows that the intensity, frequency and duration of passive movement are essential for the development of motion sickness. According to studies, the reaction also varies with the main axis of movement (vertical movements are more difficult to tolerate than horizontal movements) and the position of the test subjects (sitting, lying, etc.). Although the individual tendency towards motion sickness turns out to be very different, symptoms can be triggered in every person with a healthy equilibrium through appropriately harsh test conditions. Shepard suspects that insensitive people have a lower level of α2-adrenoceptor . The susceptibility is strongly age-dependent: children under two years of age are hardly sensitive, a maximum is reached at the age of twelve, after which the tendency to travel sickness decreases again. According to NASA experience, the sensitivity of women and men does not differ . Psychological factors, such as the subjects' introversion and stress tolerance, had a relatively weak effect.

At least 50% of military pilots get airsick during their training, other flying personnel also later in their professional life. Flight simulators cause symptoms in 10–60% of student pilots, in a military context up to 88%. Only a small percentage (3–11%) drop out because of this. The incidence of the disease on ships varies between 1 and 100% depending on the situation. The toughest conditions prevail e.g. B. in windowless free fall lifeboats . On large vessels, people at the bow and stern are more affected. According to a study, virtual reality could cause motion sickness in 61% of the participants. Space sickness is consistently observed in Russian and American space programs in 30–67% of astronomers and cosmonauts ; seldom only with the respective pilots. Passengers in cars are said to be affected by around 20%; however, the data situation is weak here. There is also a "ski sickness". This can occur at altitudes above 2500 m. Causes are vestibular overstimulation caused by wagging on uneven ground, insufficient visual control (especially in fog), minor ophthalmological problems (myopia and astigmatism), changed somatosensory input from ski boots and skis, fear of heights, fear of mountains, high speed and atmospheric pressure changes in the ear. (Hausler R., Ski sickness, Acta Otolaryngol 1995; 115: 1-2 (is also described for mountaineers in Nepal)) It is significant that the helmsman on a ship is less affected. Likewise, all passengers in a car can get motion sick on a winding route, with the exception of the driver.

According to the prevailing opinion, motion sickness occurs when the sensory organs provide contradicting information about the spatial position and movement of the body. Persistent contradictions between the movement experienced in this way and the position of one's own body should trigger an error signal in the brain stem . Apparently the brain can adapt, because after two to three days most people's symptoms subside. The afferent pathways come from the eyes , from the inner ear and from the mechanoreceptors in muscles and joints. There are contradictions either between the visual impression and the sense of position of the inner ear ( visual-vestibular conflict ) or within the inner ear between the semicircular canals and the acceleration sensors ( canal-otolith conflict ). Seasickness on a ship would fall into the first category; the second type of conflict is said to come into play in roller coasters or fighter planes. For example, during continuous passive rotation around an axis parallel to the earth's surface, the endolymph in the semicircular canals would rotate with it after a few seconds and would no longer generate a signal, while the statoliths would continue to accelerate.

This hypothesis, developed by Guedry and Reason in 1970 and tested many times since then, also explains unusual variants, such as the symptoms that can arise just by watching a video of a rollercoaster ride, or those that astronauts who are accustomed to weightlessness develop after returning to Earth . It is unclear whether the physical reaction to the neural mismatch (e.g. neural misalignment) fulfills a biological purpose, or whether the vomiting - actually a protective reflex against poisoning - is erroneously triggered.

Slow rotations (<0.4  Hz ) cause much more severe complaints than those> 1 Hz. Many studies have tried to evaluate individual stimuli precisely. So on ships z. For example, the acceleration , its predictability, the period of movement, wave height, wavelength in relation to the ship's length and the resulting roll and pitch of the ship are included in an algorithm to calculate the frequency of symptoms. Fast movements, such as riding and mountain biking, do not cause nausea.

The location of the hypothetical “error center” in the brain, which compares the sensory impressions and causes the vegetative irritation, is unclear. Theories favor the vestibular nuclei in the midbrain and the flocculus in the cerebellum . What is certain, however, is that the entire reaction takes place without the involvement of the cerebrum . According to animal experiments, the chemoreceptors in the area postrema , which irritate the vomiting center in the event of a poisoning reaction, are not involved in motion sickness.

Innovative ship hulls can reduce the critical 0.1-0.3 Hz pitching movements through suitable shaping . Large ships are also less vulnerable than small ones. It can also be helpful to choose a cabin amidships - one that is centrally located in the hull on one of the middle decks. Ship stabilizers are also useful. In ships and airplanes, passengers should be given a view of the immobile horizon as far as possible. At the first signs it seems advisable to lie down and close your eyes. Activities with focused vision, such as reading or watching TV, should be avoided. Professional pilot training sometimes includes systematic desensitization programs with stimuli of increasing intensity.

Depending on the intensity of the motion sickness, medication should not be used directly, as these are on the one hand not tolerable for every person and on the other hand can trigger various side effects. The following measures can help relieve the first signs of acute motion sickness:

If the symptoms still persist, the following medications are suitable for treatment.

Of the prescription drugs, scopolamine has the fastest response rate and the best effectiveness, at the price of side effects such as fatigue, visual disturbances and dry mouth. There are tablets, injections, and long-term transdermal patches on the market. Children and the elderly do not tolerate scopolamine well; an important contraindication is narrow-angle glaucoma . Some H1 antihistamines , such as dimenhydrinate or neuroleptics such as promethazine , also have anticholinergic effects and side effects in the brain , but weaker than atropine and scopolamine. These drugs are also available in the form of injections for acutely ill patients. The drug amphetamine was issued to soldiers during World War II; today ephedrine can be used in selected and severe cases. Other substances that are otherwise administered for nausea, such as metoclopramide and ondansetron , are not effective against motion sickness.

Over-the- counter drugs that are only available in pharmacies usually contain dimenhydrinate . In addition to tablets, there are also antihistamine-containing chewing gum. 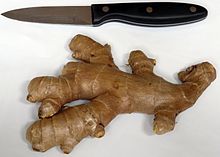 Ginger has an antiemetic effect. It is chewed in the form of small slices of the raw root, taken as a powder or in tablet form. The medication can be started the day before. It is considered to have few side effects, but should not be used by people with stomach ulcers and gallstone problems. In a small double-blind study carried out on 80 sea cadets, ginger significantly reduced the incidence of vomiting compared to placebo. Two placebo-controlled studies by the University of Tübingen (one of them double-blind) showed no difference between the four groups (Weimer K. et al .: Effects of Ginger and Expectations on Symptoms of Nausea in a Balanced Placebo Design: PLos One 2012; 7 (11 )).

Since, according to the allergist Reinhart Jarisch, there is a connection between the biogenic amine histamine and seasickness, it can make sense to adhere to a low-histamine diet before traveling. It is also recommended to take up to 2 g of vitamin C daily , as it (like many other substances) apparently has a histamine-lowering effect. There are different ways to break down histamine (the most important trigger of nausea): Vitamin C can oxidatively break down histamine, which chemists confirm. Quote: "In a prospective, double-blind and placebo-controlled study, high-dose vitamin C was also able to demonstrably reduce the symptoms of seasickness without recognizable side effects" (Koch A. et al: Seasickness and travel sickness. Deutsches Ärzteblatt 41/2018). In addition, the enzyme diamine oxidase (DAO) breaks down histamine. This also explains the cessation of pregnancy sickness from the twelfth week of pregnancy, as the histamine-degrading enzyme DAO then increases a hundredfold and can break down histamine.

Chewing movements also have an anti-emetic effect. This was shown in a comparative study with ondansetron (used in chemotherapy for cancer patients against nausea). In cooperation with the German Navy, a chewing gum containing vitamin C was produced, which combines the histamine-degrading effect of vitamin C with the antiemetic effect of the chewing movements. A study by the German Navy on a frigate with the vitamin C-containing chewing gum has started.

Glasses that create an artificial horizon in that the glasses are double-walled and about half of the liquid is introduced into the space show the wearer the direction of the acceleration vector. However, there is no verifiable proof of effectiveness for this product.