Three-jaw chuck on a lathe 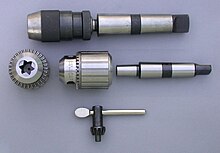 Drill chuck of a drill when turning

Simple chuck from an old drill bit without a union nut 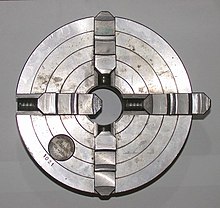 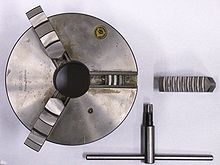 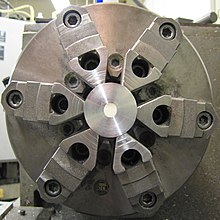 A chuck is a device that takes on tools such as drills or milling cutters ( drill chuck ) or the workpiece to be machined ( lathe chuck or colloquially American ).

Drill chucks often work in such a way that the part to be fixed is clamped between three clamping jaws (three-jaw chuck). This design has the advantage that fixed insert tools (e.g. a drill) can be centered well, which is particularly important in the case of rapidly rotating machines. Inside the chuck there is a screw that pushes the clamping jaws into a cone when they are closed, thereby clamping the tool. Keyless chucks can be opened and closed effortlessly by hand despite the high clamping forces. Key-type drill chucks offer higher clamping forces on hand drills by clamping with a drill chuck key. Machine chucks on milling cutters and boring mills must also be tightened with appropriate tools because of the high torques . As a rule, the holding thread of the drill chuck is 1/2 "x 20 in UNF fine thread design. Drill chucks for masonry drills on rotary hammers do not clamp the tool in an SDS drill chuck by frictional connection , but allow the tool to move axially and transmit the torque by means of Form fit . Drill chucks with adjustable clamping jaws for cylindrical shafts are commercially available up to 16 mm (hand drills 13 mm), smaller dimensions are 10, 6 or 3 mm, each of which also represents inch fractions. On pillar or column drilling machines , the mount is via Morse taper adapter .

For precise holding of fine drills with diameters of 3 mm and smaller, collets with 3 tongues are used in miniature drilling machines - each only for a narrow area. 4-tongue collets are built into the simplest drill bits for small drill bits with a square shaft.

For machine tools, there are holders with hollow shank taper or steep taper for drills, which are designed as whistle notch or weldon . A surface is attached to the drill shaft on which a screw fixes the drill in the receptacle. Furthermore, drills with a cylindrical shaft can be clamped in shrink holders of machine tools.

The chuck on lathes or on lathes / turning lathes is called lathe chuck .

They are either supplied directly suitable for the lathe mounting system or attached to the machine by means of a so-called flange, which has the machine mount on one side and the shape of the chuck on the other. For reasons of precision, this chuck side is turned off directly on the lathe on which the chuck is to be used.

The usual chucks clamp round or regularly shaped three- and six-sided workpieces in three jaws (three-jaw chuck), precisely shaped round and square or octagonal workpieces in four jaws (four-jaw chuck). Special shapes also have two or more than four jaws.

The clamping jaws are normally made of hardened steel, but better concentricity is achieved with soft clamping jaws, since the play in the guides can be compensated by turning the clamping jaws out. In addition, there are also special so-called split jaws that have a base body that is supported by the z. B. flat spiral is moved, and have screw-on soft jaws.

In some special lathe chucks, flyweights are located in the chuck body in order to counteract the centrifugal forces of the clamping jaws in high-speed lathes, which press the jaws against the workpiece via levers.

Manually operated chucks are mostly used in conventional lathes , but also in z. B. dividing apparatus used. They must be opened or closed with a chuck key. Hydraulic chucks (power chucks) are mostly used on CNC machines . They are operated manually by a pedal or, in the case of automatic loading, by the control system (example: bar material is automatically pulled out of the chuck with the bar gripper ).

Special forms of the lathe chuck:

Both the face plate and the clamping plate are only operated at lower speeds due to the imbalances that occur.

One of the most precise clamping methods on milling machines in terms of concentricity is offered by clamping with a shrink-fit chuck. In the face of the chuck there is a hole that is approx. 3–7 µm smaller than the diameter of the cutter shank. When heated by induction , the chuck expands and the milling cutter can be inserted. When the material cools down and the material contracts as a result, the chuck clamps the tool in a force-fit and precise manner. The disadvantage is that a separate chuck is required for each shaft diameter. Shrink chucks are used in machine tools where the tools have to be changed several times. Due to the defined position of the drill, the drill is always clamped in the machine in the same way and there are no deviations due to different clamping lengths of the drill.

Chucks on hand tools (e.g. for clamping interchangeable blades in scalpels or for fixing different needle file inserts in a file handle) often work according to the same principle, but can be mechanically less complex, as work is usually not done at high speeds.