The title of this article is ambiguous. Further meanings are listed under bottle (disambiguation) .

Wine bottle with a convex bottom

A bottle is a sealable container for the transport and storage of liquids and gases as well as pourable solids such as powder . It usually consists of glass or plastic , sometimes of metal .

The Old Germanic noun (Middle High German vlasche , Old High German flaska , also Romansh fiasko ) belongs in the sense of “braided vessel” to the Indo-European word type “flechten”. The bottles previously made of wood, clay, pewter or sheet metal were surrounded by wicker for protection and better transport. Only recently has "bottle" been used to describe a glass vessel - the wine bottle was still called Bouteille in the 19th century . The Low German expression for bottle "Buddel" is occasionally used in High German (see bottle ship ).

Drink from a bottle

The most popular closures for bottles today are likely to be various forms of threads . Almost all gas bottles, a large part of the beverage bottles and storage bottles for chemicals and cleaning agents have a screw cap , especially if it should be possible to close them again. Screw closures can be made with all materials. Normally, however, the thread alone does not constitute a tight seal. Therefore, additional sealing materials are always used for this purpose.

The crown cap is only common for beverage bottles . It cannot be resealed, is always made of metal and can only be placed on bottles made of hard material (glass).

Bottle clogging has been a common practice in virtually all historically studied cultures that made bottles. A wide variety of materials were used for this. The most common ones were probably beeswax and later cork . Today, the cork has only survived when closing wine bottles, but here, too, it is being replaced more and more by screw caps and plastic stoppers.

Pressure-tight caps are used as closures for gas cylinders, often provided with a pressure reducing valve. 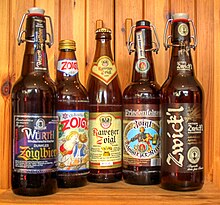 Most commonly, beverages are kept in bottles . The bottle and cap protect the drink from the ingress of foreign substances such as bacteria and from evaporation . Many bottles are made of tinted material to shield solar radiation , especially UV rays.

The beverage bottles are divided into reusable and non- returnable bottles according to the transport requirements .

A special bottle is the canteen , which is used for soldiers or campers.

After emptying, they should be returned to the bottler and refilled after extensive cleaning. Such bottles are subject to a bottle deposit when purchased , which is intended to prevent the consumer from disposing of the bottle for convenience. Reusable bottles are usually sold in crates that hold 6, 11, 12, 20, 24, 25 or 30 bottles, for example. The amount of the reusable deposit is described in the article bottle deposit .

They are now mostly made of PET , less often of glass. They are, after emptying the recycling of materials supplied, usually via the distributors and manufacturers, partly in glass recycling containers . The glass or PET is then usually ground and melted down in order to process it into new bottles or other products. Since 2003, the one-way deposit has been levied on the majority of one-way bottles in Germany . The reason for this is the life cycle assessments by the Federal Environment Agency, which came to the conclusion that, despite recycling, non-returnable bottles perform significantly worse than returnable glass and PET bottles; However, the view is also held that one-way bottles are actually ecologically more favorable because of the shorter transport routes for empty containers (no return transport to the bottler) and because of the lack of environmentally harmful cleaning, which is necessary for returnable bottles before they are refilled. Disposable bottles are sold individually, in beverage crates , wrapped in foil for six or eight bottles or in a cardboard carrier (also called a trailer).

Depending on the intended use, there are different requirements for the content product:

Medicinal bottles and commercially available bottles for "non-drinkable contents" must, if possible, differ in the shape of the beverage bottles. On the other hand, closures are necessary that cannot be opened by children or whose principle requires pausing when opening.

Bottles made of clay and, as a result, of earthenware are rarely used today. Usually there are still characteristic containers for special spirits ( Steinhäger ) or they are jewelry bottles for expensive exquisite drinks. Up to the beginning of the 20th century mineral water was often still in seltzer bottles from stoneware sold. The longer cooling hold played the decisive point of use.

The glass bottle is the common form of container glass and has suitable properties such as good product protection and the possibility of recycling. The break resistance is increased by optimized shapes. Special glass bottles have a number of marks on the lower edge or on the bottom, from which the place and time of manufacture can be identified. Among other things, the glassworks brand is located here .

When high pressure or high temperatures are required, metal bottles are used, such as for liquefied gas and gas bottles . 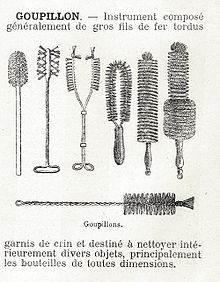 Cleaning brushes for bottles of all kinds were part of the tools of the pharmacist, druggist or general store

The usually narrow neck of a bottle makes cleaning difficult. To clean reusable bottles in the brewery sector, spray systems with hot water or cleaning solution are mostly used in order to avoid inadvertent contamination of the new product. In the household and in the laboratory, however, the individual bottle is often handled. There is a wide range of bottle brushes for this purpose . These are designed in a wide variety of ways so that the brush fits through the narrow bottle neck, but on the other hand can reach and clean the entire interior of the bottle - in particular the interior wall of the bottle.

History of the bottle

Bottles made of clay, pewter or other materials that could be processed in simple manual processes were already common objects of use in early high cultures. Finds of early bottle-like vessels come mainly from excavations in Egypt, East Asia or the Central European settlement area of ​​Germanic tribes. Egyptian members of the royal family were buried on a large scale with everyday objects that the deceased would need on their way to the realm of the dead, including medicine and oils in bottles. Simple clay bottles, closed with beeswax and containing mead, were also found in Germanic graves. Although the knowledge of glass production was known for centuries before Christ, due to the initially extremely complex and expensive manual production process, glass bottles were unique pieces and thus exclusive and valuable items for more privileged members of society. They were mainly used to store luxury goods such as oils, essences or perfumes. The glass bottle for storing drinks did not gain acceptance until the end of the Middle Ages, when the technology of glass blowing became more advanced and more efficient production became possible. In the 17th century, the Italians had developed the processing of glass to a mastery. The final triumph of the glass bottle took place in the course of industrialization in the 18th and 19th centuries, when large-scale glass processing was made possible by industrial processes. Since then, the manufacturing and recycling processes for glass bottles as well as the shape of bottles have been continuously optimized. There was a move towards producing bottles in standardized sizes and uniform shapes, which give the product they contain a recognition value. For example, features of the original shape of the Coca-Cola bottle can still be seen in the modern bottles of this manufacturer.

The swear word "bottle" for a stupid person (who is as "hollow as a bottle") probably goes back to the first attested French bouteille in the same meaning (compare Italian " fiasco " in the double meaning of bottle and also mishap). Designations of hollow bodies are often used as swear words.