A Bocksbeutel is a bottle in the approximate shape of a flattened ellipsoid for wines from the Franconian growing region . The content is usually 0.75 l (three Franconian bottles of 0.25 l each).

The Bocksbeutel has been used as a typical container for Franconian wine for at least 250 years , initially for the Würzburger Stein , later also for other Franconian wines. In 1728 the city council of Würzburg decided that the best wines from the city hospital should be filled in Bocksbeutel.

Usually the Bocksbeutel is used for high quality wines. The minimum must weight for Bocksbeutel wine is 72 degrees Oechsle above that for quality wine . There has also been a new regulation since 2009. This means that wines that are to be filled in Bocksbeutel must have a minimum score of 2.0 in the official quality wine test. 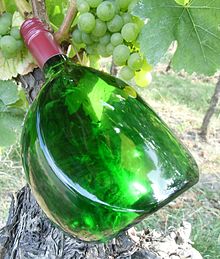 The bottle shape as such has been in use for much longer. It is probably derived from canteens that were flattened for practical reasons: on the one hand, because they are easier to transport in luggage or on the body, on the other hand, because the bottle cannot roll away on uneven terrain. The shape has always been used in other wine regions, for example in Portugal .

The Bocksbeutel ( Low German Booksbüdel for book bags ) was a bag-like cover used for prayer and hymn books (see bag book ) since the pre-Reformation period . Usually councilors carried such a booklet with them when they went to the council. After this had gone out of fashion, but some still held on to it, the old-fashioned way of thinking and the insistence on a defeated point of view was called goat baggy . Other sources, for example Kaspar von Stieler's dictionary from 1690, name the obvious interpretation of the scrotum of a billy goat as the origin of the word . This interpretation is supported by the fact that Bokesbudel already existed in the early Middle Ages, when there were no hymn books. The German dictionary calls the phrase attach a buckbag to someone to make them look ridiculous.

At the end of 2015, the Franconian Viticulture Association presented a bottle redesigned by designer Peter Schmidt , which will replace the previous Bocksbeutel bottles in the future. The flat, bulbous shape is retained, but the edges become more angular. 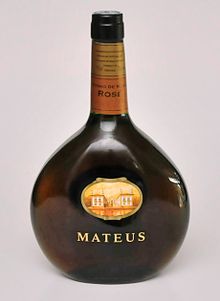 In 1983 the European Court of Justice ruled in the so-called Bocksbeutelstreit , that this bottle shape, contrary to the wishes of the Franconian winegrowers , does not enjoy trademark protection and that the stipulated provisions in the German Wine Ordinance were inadmissible, according to which only quality wines from Franconia could be sold in Bocksbeutel bottles. "As far as the wines are bottled in such bottles according to a fair practice and conventional practice in their home country, the ban [the use of the Bocksbeutel bottle] is disproportionate." ( ECJ, Case 16/83, Coll. 1984, 1299 Rn.31ff. ) This applies almost exclusively to Franconian and Portuguese wines, which is why German supermarkets usually only find wines from these two growing regions in the Bocksbeutel. In Baden, the bottling of wine in Bocksbeutel has been common in the wine-growing communities of Baden-Baden's Rebland since the 18th century. Most of them are high quality Rieslings. Wines from the Baden Franconian region may also be bottled in Bocksbeutel bottles due to their historical territory. "Today the Bocksbeutel is the trademark of Franconian wine and has been protected by copyright since 1989 for quality and premium wines from Franconia."