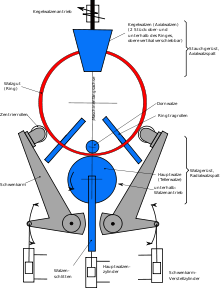 Ring rolling mill of the Bochumer Verein with an open frame

Rolled rings are z. B. required as wheel tires or as bearing shells of large roller bearings and can have a diameter of a few tens of centimeters up to nine meters. Other important products that are manufactured by ring rolling are gear wheels and bevel gears or their preliminary products.

In a modern radial-axial (ring) rolling mill ( RAW , colloquially ring rolling machine ), the curved ring surfaces and the end surfaces of a ring are rolled by means of two separate roll gaps: The ring wall thickness is between a driven main roller (formerly "plate roller") that acts on the outside of the ring. as well as a mandrel roll acting on the inside of the ring ("radial roll gap"). The ring height is rolled in the opposite axial roll gap. The reduction in wall thickness and ring height results in a tangential flow of material, which increases the ring diameter due to the constant volume (neglecting the temperature-related shrinkage). The axial roll gap consists of two 'conical' rolls. To reduce the height of the ring, the upper axial roller is advanced against the lower axial roller. Colloquially, the axial rollers are also referred to as tapered rollers. Both axial rollers are arranged in the axial stand. In order to avoid the ring diameter increase, the axial frame is positioned radially along the machine's longitudinal axis. The longitudinal axis of the machine is formed by the axis of the main and mandrel roller and the longitudinal axis of the axial rollers.

Rings - especially wheel tires for the emerging railways - were rolled at the beginning of industrialization with drum mills ( head rolling mills ) with which the ring thickness and width as well as the exact circular shape had to be set in several process steps. The simplest form of such a drum rolling mill is a duo rolling mill in which the rolls protrude from the stand on one side so that the ring can be inserted between the rolls. In 1889, James Munton developed the current basic shape of the ring rolling mill.