Pudagla is a municipality located in the Achterland on the island of Usedom . The community has been part of the Usedom-Süd office since 2005, with its seat in the city of Usedom, previously it was part of the office at Schmollensee .

Pudagla is located in a scenic region between the Achterwasser, about 1,500 meters away in the west, the Schmollensee lake immediately to the southeast, and the approximately 5,000 meters away, northeastern Baltic coast. The district of Pudagla is also located at the foot of the Glaubensberg (38.8 m above  sea ​​level ) and since the realignment of the federal highway 111 in January 2008 directly on this traffic route. This runs in the middle of the Usedom Island Nature Park . About 15 kilometers southwest of the municipality is the city of Usedom and about six kilometers to the east are the imperial baths of Bansin , Heringsdorf and Ahlbeck . The Camik desert and the Schäferei Stoben housing estate belong to the district .

The village of Pudagla was first mentioned in a document in 1270 as "Pudgla", also written as "Putglow". This is a paraphrase of the Slavic pad glowe (= on the mountain) and refers to today's Glaubensberg south of the village on Schmollensee. This hill got its name derived from "glowa" - Low German = "faith".

Duke Barnim I gave the Grobe Monastery near Usedom on October 14, 1273 the village with the tithe and all rights as well as the Pritolniza brook , today's Groote Beek . After the monastery had acquired the village of Camik , located west of the Achterwasser, in 1307, the monastery was moved from Grobe to Pudagla in 1309. By 1400 it had expanded its already closed area of ​​the island from the city ​​of Usedom via the Mellenthiner Heide to Benz , which also included possessions on the Pomeranian mainland around Ueckermünde , to the Gothensee and the Thurbruch . Pudagla was the richest monastery in the region, had its own fishing rights and an independent jurisdiction. A number of found deeds of ownership are considered by historians to be forged.

Already at the time of the active monastery, the road embankment was piled up from the plateau near Pudagla through the boggy lowland between Schmollensee and Achterwasser in the direction of the confluence of the road Ückeritz to Bansin (former B 111), it was also called monastery dam. It has been preserved as the road substructure of the B 111 federal road , rededicated from the B 110.

Economic decline began in the 16th century. The Reformation was introduced in Pomerania in 1534 and the Pudagla Monastery was secularized the following year . Gerhardt von Zartin, the last abbot of the monastery now converted into a ducal office, left this with his monks in 1535 and moved to the mainland to Anklam .

The Pomeranian Duke Ernst Ludwig , son of Philip I of Pommern-Wolgast , had a new castle built here in 1574 as a widow's residence for his mother, Duchess Maria von Sachsen , daughter of the Saxon Elector Johann the Steadfast . This can still be read on an inscription under the Renaissance relief with the ducal coat of arms on the castle facade. Only the monastery church, parts of the monk cells and a few walls have been preserved from the monastery complex.

Griffin coat of arms on the lock

After the ducal family died out, Pudagla became dominal, i.e. the property of the respective ruler over the Pomeranian territories.

The area was badly devastated in the Thirty Years War . After the Peace of Westphalia in 1648, Pudagla, like the entire island of Usedom, belonged to Swedish Pomerania . The largest part of the Pudagla office was initially given to Johan Axelsson Oxenstierna , who was instrumental in establishing Swedish rule in Pomerania . In 1654 the abdicated Swedish Queen Christina received the income from the former possessions of the Pomeranian dukes as maintenance. This also included Pudagla, where a separate administration was set up for their possessions. The castle now served as the seat of their governor.

The castle and monastery area became a dominal property.

The disputes between the great powers Denmark , Sweden , Poland and Brandenburg / Prussia over Pomerania and the strategically important island of Usedom did not leave the Pudagla office spared in the 17th and early 18th centuries. After the Treaty of Stockholm in 1720, the Prussian administration moved in, which in 1824 moved its official seat from the Pudagla office to the district seat of the new Usedom-Wollin district in Swinoujscie .

After the administrative reform in 1815, Pudagla came to the Prussian province of Pomerania and belonged to the district of Usedom-Wollin from 1818 to 1945 .

From 1945 to 1952 the part of Pomerania that remained in the German occupation zones after the Second World War formed the district of Usedom, which in 1952 became part of Wolgast in the Rostock district. After 1945 the manor house, which was partly destroyed in the war, was repaired in a simplified manner and used as living space for resettlers and for communal purposes. Renovation and renovation work took place several times.

From the late 1950s, the Radio Technology Battalion 33 (FuTB-33) of the 3rd Air Defense Division of the NVA was stationed in Pudagla . This operated several radar stations on the Rauhen Berg , the Dachsberg and the Schluchtenberg . The barracks and communication centers were on the Rauhen Berg , while the technical radar systems, mobile or stationary, were on the other mountains.

After the fall of the Wall in 1990, the Bundeswehr used these facilities until 1993. An industrial area developed on the former barracks area, and gravel pits and recycling facilities were set up in between after 1990. Sections have been renatured or converted into leisure facilities, e.g. B. Motocross tracks converted.

An old post windmill was put back into operation as a tourist attraction south of the Stoben sheep farm. It already existed around 1650, was often renewed and then restored in 1997 and set up as a museum.

The municipality of Pudagla belongs to the state of Mecklenburg-Western Pomerania , which was re-established together with other federal states after German reunification . In 1994 Pudagla came to the district of Ostvorpommern , which in 2011 became part of the Vorpommern-Greifswald district.

Camik was first mentioned in 1263 as "Camic". The place was named until 1307, then it probably fell desolate. The Slavic founding name is interpreted as "stone". The location is not clearly verifiable, only the information that the place was west of Pudagla is known. The location on the Konker Berg on the Achterwasser is assumed. It is not known whether the name has anything to do with the well-known devil's stone (pudagla) , which is very close there.

The municipality does not have an officially approved flag .

The official seal shows the municipal coat of arms with the inscription "GEMEINDE PUDAGLA * LANDKREIS VORPOMMERN-GREIFSWALD". 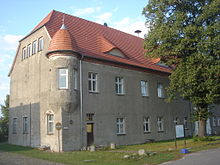