The municipality of Insel Hiddensee (until February 2, 1993 Hiddensee ) comprises the island of Hiddensee and some of the islands off the coast to the east . It has been part of the West-Rügen Office since 2005, based in the municipality of Samtens . The community is divided into the districts of Grieben , Kloster , Vitte and Neuendorf .

The community name "Insel Hiddensee" refers directly to the name of the island, which is mentioned as "Hedinsey" in the Prosa-Edda and as "Hithinsö" in the Gesta Danorum of the Saxo Grammaticus . Both mean something like "Island of Hedin" or "Hedin's Island". The legendary Norwegian king Hedin is said to have fought for a wife or even for gold. Under Danish rule, "Hedins-Oe" was officially in use. Until 1880 the island was still called "Hiddensjö" in German maps, and in 1929 "Hiddensöe" in German travel guides. The complete Germanization and reinterpretation to "Hiddensee" is relatively new.

Aerial view of the steep coast at the Dornbusch lighthouse , Nordhaken on the island of Hiddensee

The elongated (16.8 kilometers long) island of Hiddensee occupies the largest part of the municipality. The island is bounded by the Schaproder Bodden and Vitter Bodden in the east, the Gellenstrom (the fairway to Stralsund) in the south and the open Baltic Sea to the west and north. Also included are a number of smaller, uninhabited islands to the municipality: Fährinsel , Gänsewerder and Tedingsinsel . The water bodies bordering the islands are not part of the municipality.

The municipality of Insel Hiddensee has four districts (from north to south):

Greaves is the oldest, northernmost and smallest village on Hiddensee and is located on the eastern edge of the island's highlands. The name is derived from the Slavic grib (for "mushroom"). Greaves does not have its own port. Between 1969 and around 1990 there was a concrete jetty on the Bodden side (at Schwedenhagen ) between greaves and the monastery , which was initially used for the oil tankers. After the end of production, the push boat moored here. After that it was used as a sailing port for a short time. The jetty was eliminated at the beginning of the 21st century. With the complete redesign of the port of Kloster, a real sailing port was created .

The district monastery takes its name from the former convent of the Cistercians , which was from 1296 to 1536 near the present-day port of monastery. It was dissolved with the Reformation . Today, the monastery with the Gerhart Hauptmann house, the island church and the island cemetery with the graves of Gerhart Hauptmann , Walter Felsenstein and Gret Palucca is the cultural center of Hiddensee. It is located directly on the highlands, the highest point of which is the thorn bush. The Hiddensee Biological Station and the Hiddensee Ornithological Station are located in Kloster as branch offices of the University of Greifswald , both of which emerged from the Hiddensee Biological Research Institute , which was established in 1930 . Because of the island's favorable location far from the mainland, there is a beehive in the thorn bush forest .

Vitte (pronounced: Fitte ) was first mentioned in a document in 1513, is the main town and at the same time the largest and central town on the island. The name is a derivative of "vit" ; This used to be used to describe fish sales outlets (for the origin of the word, see also Vitten ). The town hall with the municipal administration is in Vitte. In addition, here is the ferry dock for the cargo ferry, with which the vehicles for the supply and disposal of Schaprode on the island of Rügen translate. The freight traffic is transferred to trailers that are pulled by electric tugs and distributed to the food markets and restaurants on the island. Sometimes smaller goods are also delivered with horse-drawn vehicles. The heathland on Hiddensee, between Vitte and Neuendorf, is also part of Vitte. The oldest surviving house on the island is in Vitte, the "Hexenhaus" (formerly the summer house of Adolf Reichwein ). In addition, Vitte is home to the (probably last) tent cinema, the Hiddensee lake stage ( puppet theater ) and a Dutch windmill, the “Black Mill”. 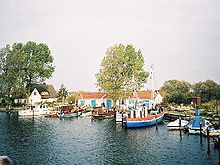 Neuendorf is the southernmost place on Hiddensee. The residents of Neuendorf are referred to as "The South". Large parts of Neuendorf resemble a large meadow on which the houses are lined up like a string. In some cases there are no laid-out paths, so that individual addresses can only be reached directly across the meadow. Neuendorf has its own port.

Neuendorf consists of two originally independent towns: the older Plogshagen , probably dating back to the 13th century, in the south, and the actual Neuendorf, which was created around 1700 when the Glambek settlement was evacuated . Remains of this settlement can still be seen today northeast of the Neuendorf area.

South of Neuendorf is the so-called Gellen , the southern part of which, an important bird sanctuary, belongs to protection zone I of the Vorpommersche Boddenlandschaft National Park and is therefore not accessible to the public.

The places on the island of Hiddensee formed the three communities of Kloster-Grieben , Vitte and Neuendorf-Plogshagen until the 1930s . Between 1937 and 1939 they united to form the municipality of Hiddensee , which thus included the entire island area.

Since the founding of the GDR in October 1949 to 1990, the community belonged to the Rügen district in the Rostock district and became part of the state of Mecklenburg-Western Pomerania after German reunification . It has been called the Insel Hiddensee since the 1990s . In 1996 the municipality fought for freedom of office , which it lost again in 2005 during the regional reform in Mecklenburg-Western Pomerania. Since then she has been part of the West Rügen Office .

Since 2005, the municipality of Insel Hiddensee has had the addition of Seebad to its name .

The community council of Seebad Insel Hiddensee has 8 members. The local elections on May 26, 2019 led to the following result:

Thomas Gens was re-elected as mayor with 55.06% of the vote.

The left flank has a light blue background with a yellow seahorse (silhouette of the island), the right flank has a yellow background, on which a house brand typical for Hiddensee appears in light blue. The blue-yellow color shows that it belonged to the Kingdom of Sweden between 1648 and 1815.

? Flag of the municipality of Insel Hiddensee

The coat of arms designed by the Weimar heraldist Michael Zapfe was approved by the Ministry of the Interior on January 29, 1998 and registered under the number 141 of the coat of arms of Mecklenburg-Western Pomerania.

The official signet of the seaside resort of Hiddensee is based on a design by the Berlin painter Torsten Schlüter from 1996. It depicts the Hiddensee lettering and an abstract coastline on a white background.

The inhabitants of the island live mainly from tourism . The majority of the visitors are day tourists, Hiddensee has around 50,000 visitors annually. Even before 1990, Hiddensee was a popular holiday destination, in the 1970s there were up to 4,000 holidaymakers and 3,000 day-trippers on the island every day during the main season. Due to the desired naturalness, the tourism sector has hardly been expanded, and the number of visitors has hardly changed since then.

A significant part of the Hiddensee area is used for agricultural purposes.

Teaching has been taking place on the island since 1788. In the beginning, this was done by the sexton . The first school in Vitte was founded on November 2nd, 1887. In 1990 the Vitter School became a secondary school with a main and elementary school section, later a “ regional school with elementary school”. In 2016/2017 56 students will be taught in the first to tenth grades.

Transport of people with a horse-drawn carriage

Private motor vehicle traffic has been prohibited on the entire island since the 1950s. Some motor vehicles are approved for public tasks, delivery traffic and agricultural use, mostly with electric drive since the 21st century. This makes the island almost car-free . Part of the movement of people and goods is carried out with horse-drawn vehicles. The steadily accumulating legacies of the horses are usually removed very quickly by community workers or residents.

Between the districts of Grieben, Kloster, Vitte and Neuendorf, a regular bus ( line sprinter ) runs every week between 7 a.m. and 5 p.m. , actually the school bus of the Vorpommern-Rügen transport company (VVR). The residents can use the bus free of charge, tourists pay ticket prices depending on the destination, they are between 3 and 4 euros; half a day ticket costs 3.20 euros (as of July 2019)

The most important individual means of transport on the island is the bicycle . Private bicycle rental companies have established themselves in every district, renting children's bicycles, tandems, bicycles with child trailers, rickshaws and high-quality e-bikes on an hourly or daily basis.

In contrast, the condition of the sidewalks and driveways in urban areas is not particularly good: because nothing may be changed in a national park, the roads remain unchanged. After heavy rain, large puddles of water hinder traffic and walkers, and some streets have transverse concrete slabs from the 1960s. These are not only bad routes, but also sources of danger. The dike path from Kloster to behind Neuendorf and the connecting road between Kloster and Vitte are in good condition.

You can reach the island of Stralsund and of Schaprode on Rügen with passenger ferries of Reederei Hiddensee that invest in ports Monastery, Vitte and Neuendorf. The Vitte ferry , which can also transport freight, starts from Schaprode in Vitte. In the summer season there are other irregular boat connections with Ralswiek , Breege , Wiek and Zingst . There are also water taxi connections with Stralsund and Schaprode. Since the 2010s, Vitte has also been increasingly used by smaller cruise ships for passengers to stay on the island for several hours.

Wikisource: The island of Hiddensee - legend about the origin.  - Sources and full texts