Sea rescue boat ( prefix SRB ) is the name of the German Society for Rescue of Shipwrecked People (DGzRS) for smaller lifeboats of up to 12 meters in length, which are driven by a volunteer crew and are primarily used in coastal regions.

In Germany, the lifeboats are operated by the German Society for the Rescue of Shipwrecked People. Unlike the salaried crews of larger rescue boats , the crews of rescue boats set honorary volunteers together with appropriate training.

With the development of the first generation of modern sea rescue cruisers at the end of the 1950s, the end of motor lifeboats was heralded in Germany. Although these boats were initially indispensable for the operational capability of sea rescue on the German coasts, it was necessary, not least because of the technical development, to develop new rescue units. Another reason was the increase in recreational water sports and the associated accidents . For this type of accident, the relatively expensive use of rescue cruisers would be uneconomical. On the other hand, these accidents usually occur in shallow water areas, so that smaller boats with shallow drafts are more suitable in such cases; when using a cruiser, the daughter boat would have to be abandoned, which would also mean a loss of time.

From 1971 onwards, different series of lifeboats were created, classified by the DGzRS in classes, which gradually replaced the motor lifeboats at the DGzRS stations. Many classes were structurally identical or at least based on the tried and tested daughter boats of the rescue cruiser; others were independent developments.

A rather opposite approach was taken with the former daughter boat of the “ Hermann Marwede ”, the 46-meter class cruiser. In this case, the model was the lifeboat of the 9.5 meter class. In the meantime it has been replaced by a rigid inflatable boat and is operated as an independent rescue unit.

The characteristics of the boats are high maneuverability, shallow draft (50 to 100 cm, depending on the type) and the ability to straighten up independently after capsizing. The boat length varies between 7 and 12 m, the engine power between 40 and 235 kW, so the boats can reach speeds of 10 to 18  knots .

See also : List of the sea rescue units of the DGzRS

With the reunification, the DGzRS was also responsible for the Bodden waters on the German Baltic Sea coast. This required the introduction of a new class of boats, the so-called lagoon boats, which can operate in these shallow waters due to their water jet propulsion .

When the boat is idle, it is stored on a trailer. The towing vehicle is or was a custom-made Unimog U 2150 L , the exhaust system of which was raised so that the car and trailer can drive to the beach and the boat can float up from the trailer in the water. Butt in Zinnowitz now has a John Deere 7730 tractor as a tractor unit.

Within this class, boats were built in two variants that differ slightly from each other. 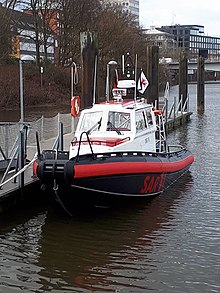 2018 DGzRS has a prototype of a Rigid Buoyant Boat (RBB) for testing as a lifeboat for the Bodden - and fjord waters put into service. The fully plastic boat from the Finnish specialist shipyard Arctic Airboats is 8.9 meters long, 3.10 meters wide and has a minimum draft of 65 centimeters. It consists of extremely robust polyethylene (High Molecular Weight Polyethylene). With the two outboard motors of 200 hp each, it reaches a top speed of 40 knots (approx. 75 km / h). The prototype SRB 76 is stationed in Maasholm at the mouth of the mucus . A second RBB of this class has meanwhile replaced the old 8.5 meter class boat on the Great Jasmunder Bodden in Breege on Rügen .

Starting in 2003, these boats will be built with two additional frames, increasing the total length to 10.1 m. A more powerful engine with 380 hp has been installed since 2015.

After the boats were initially built at the traditional shipyards in Lower Saxony / Bremen ( Lürssen , Schweers and Fassmer ), the last boats were all built at the Tamsen Maritim shipyard in Rostock .

Lifeboat stations on the North and Baltic Seas

In April 2003, the DGzRS put a so-called rigid inflatable boat (RIB), a fast inflatable boat with a solid hull, into operation for the first time at the station in Ueckermünde . The boat with the designation Dora (formerly Rescue Uecker ) was stolen at the end of August 2018, has been missing since then and has been removed from the fleet list.

The 7 m class of the lifeboats was the smallest of all, the boats are partly identical to the daughter boats of the older lifeboats .

Boats of this class - sorted by commissioning:

This class was introduced in 1977. All units are decommissioned or given to other sea rescue services.
The boats have a length of 9 m, a width of 2.7 m and a draft of 1 m. With an engine output of 140 kW, they reach 15 knots.

Representatives of this boat class are:

The two units of the 12-meter-long lifeboats, known internally by DGzRS as beach lifeboats, were put into service together with the boats of the 7-m class in 1972. Due to their size, the boats are also suitable for independent use on the high seas. Because of their age, the two were SRB taken out of active service and new SRB replaced the 9,5- or the 10.1-meter class. For some time now, the " Eduard Nebelthau " and the " Siegfried Boysen " have been moored in Neustadt in Holstein at the SAR school of the DGzRS, where both are used as training boats.

Boats of this class:

List of the sea rescue units of the DGzRS