Maasholm ( Danish Masholm ) is a municipality in the Schleswig-Flensburg district in Schleswig-Holstein . The community lies at the mouth of the mucus and is a recognized resort and holiday resort. Maasholm has received several awards in the Our village has a future competition.

Maasholm is located about 36 km northeast of Schleswig on federal highway 199 . Since Maasholm was originally an island, the village can now be reached via a dam. The municipality also includes Maasholm-Bad, Exhöft (Danish Eghoved , formerly also in German Eckshöved ) and Gut Oehe (Danish Ø or Gade ).

The place name was first recorded in writing in 1649 as Maes . In the past the place was simply called Mås (in Danish mose≈moor, moist meadow). The name was later expanded to include -holm for island.

There was already a Viking settlement on the south side of the former island of Oehe , which is still in today's municipality . In the 17th century, a fishing settlement was founded in Maas, but it had to be abandoned in 1701 after flooding in favor of today's Maasholm. With the construction of the dam on the Oeher Noor, there has been a permanent land connection since 1798. In the Danish period the place belonged to the parish Kappeln ( Kappel Landsogn , previously parish Gelting ) within the Kappelner Harde (formerly Nieharde ) within the Duchy of Schleswig (Sønderjylland), after the German-Danish War in 1864 the place came to Prussia. The Petri Church, which is also used as a community hall, was built in 1952.

In 1997 the former anti-aircraft missile site in the municipality was converted into a nature experience area.

Election researchers Rudolf Heberle and Stein Rokkan report a surprising observation of pre-war voting behavior : “The fishing island of Maasholm offered an extreme example of the influence of social solidarity on the change in political opinion in smaller communities. Here there was a change from an almost unanimous decision for the KPD to an almost unanimous victory for the NSDAP in 1932. The reasons for the radicalism lay in economic conditions, in particular the fishermen's dependence on wholesale companies. The fact that the turnaround from one extreme to the other was almost unanimous can probably be explained by the fact that the population consisted of very few kinship groups, all of whom were related by marriage. "

Of the nine seats in the municipal council, the CDU has five seats and the SPD four seats since the 2013 local elections .

Blazon : "Divided by silver and blue, on a fallen Elker in confused colors above a ship accompanied by the blue steering wheel right and blue three, with the heads of the three-pass each made fish left."

Maasholm has an important fishing port ( fishing license : MAA) and a fish smokehouse. The tourism is the place that also has a marina with surfing and sailing schools, sailing boat rentals, yacht brokerage, shipyard and boat engine service, an important source of income. Maasholm is the starting point for excursions, deep-sea fishing and the Wikinger-Friesen-Weg theme cycle path , which follows the former trade route of the Vikings and Frisians along the Schlei, Treene and Eider rivers .

Rescue station of the DGzRS 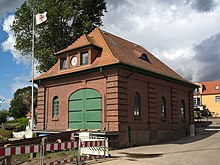 The German Society for Rescue of Shipwrecked People (DGzRS) has been present in Maasholm with a rescue station in the fishing port since 1918 . The historic station building on the main road still has the old runway that was used to launch the lifeboat in earlier years. The station covers the Baltic Sea area between Flensburg Fjord and Eckernförde Bay . To do this, the exit at the small lighthouse near Schleimünde , three kilometers away, must be passed from the station in Revierfahrt .

In 1934 the very first motorized lifeboat of the DGzRS, the Oberinspector Pfeifer from 1911, came to Maasholm. However, the boat was taken out of service after two years and replaced by the Maasholm . From 1948 there were two motor lifeboats at the station, as the station is also responsible for the Ostseefjord Schlei .

From 1967 to 2018 there was a small rescue cruiser (SK) at the Schumacher Bridge , which is designed for less crowded sea areas and is operated with a full-time crew. The Paul Denker was the first sea rescue cruiser made entirely of aluminum in 1967, but it was relocated to Grömitz after only two years and was replaced by the two meter longer SK G. Kuchenbecker . This remained on this station until 1990 and was replaced by a new building of the 23.3 meter class called Nis Randers . Maasholm has not been a double station since 2018, as the Nis Randers was relocated to the newly established station in Olpenitz . From there, the locations on the Baltic Sea can be reached more quickly, as the sluice mouth can only be accessed at reduced speed.

The old motor lifeboats of the DGzRS were successively replaced from 1971 by the newly constructed sea ​​rescue boats . These have the same properties as the rescue cruisers, but due to their smaller size they are better suited for use near the shore and in the event of accidents in recreational water sports . From 2000 to 2010, Franz Stapelfeld , which had previously worked in Puttgarden for ten years, was responsible for the volunteers in Maasholm . The Boddenboot Butt came to the station from the Zinnowitz station in 2010 and was renamed Wuppertal in 2012 . The prototype of the 8.9 meter class of the DGzRS has been in Maasholm since 2018 . It is an extremely robust all-plastic boat ( Rigid Buoyant Boat ) with two outboard motors . This means that the Hellmut Manthey can reach a speed of 38 knots (around 70 km / h).

Municipalities in the Schleswig-Flensburg district