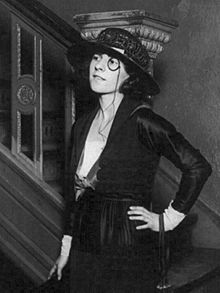 Ruth Gordon (* thirtieth October 1896 in Quincy , Massachusetts ; † 28. August 1985 in Edgartown , Massachusetts) was an American actress and playwright who as an actress to Oscar for Rosemary's Baby won and was nominated three times as a screenwriter. 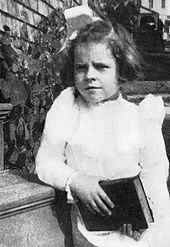 Ruth Gordon at the age of four

Ruth Gordon was born the only child of a factory foreman and former ship captain. She was a baptized Episcopal woman . She took an early interest in the theater and, as a teenager in the small town of Quincy, wrote to many famous actresses for autographs. In 1914 she began her acting training at the American Academy of Dramatic Arts . The following year she began her career as an actress with appearances in a few silent films and a small role in a stage production of Peter Pan on Broadway . There, Gordon became a well-known character actress in American theater by the end of the 1910s. In the decades that followed, she assumed significant roles in both classical and modern plays.

From the early 1940s Gordon changed at least partially and began a second career as a screenwriter in Hollywood , mostly at the side of her second husband Garson Kanin . Together, the couple was nominated three times for a screenplay Oscar: first for the film thriller Ein Doppelleben (1947) about a schizophrenic actor who becomes a murderer, later for the comedies Ehekrieg (1949) and Pat and Mike (1952) with Katharine Hepburn and starring Spencer Tracy . George Cukor directed all three nominated films . Cukor was also responsible for the staging of Theaterfieber , the film adaptation of Gordon's autobiographical play Years Ago , in 1953 . In addition to her work as a screenwriter, Gordon also took on acting roles in some Hollywood films of the 1940s, for example as Mary Todd Lincoln in the biography Abe Lincoln in Illinois (1940) and alongside Greta Garbo in The Woman with Two Faces (1941 ).

At the theater, Gordon also wrote his own plays for himself and her sometimes eccentric style. One of her greatest successes was the comedy Over 21 , the film rights of which she sold to Columbia Pictures in 1945 for the then considerable sum of 350,000 US dollars . The main role in the film was played by Irene Dunne , which led one critic to comment: "Miss Dunne gives the most commendable impression of Ruth Gordon playing Irene Dunne playing Ruth Gordon." (to German: "Miss Dunne gives the most convincing impression of Ruth Gordon, who plays Irene Dunne, who plays Ruth Gordon.") 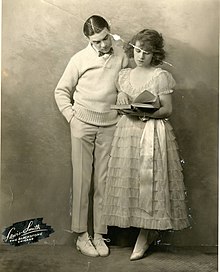 Gordon herself appeared again and again in more or less major supporting roles and became a film star in the late 1960s when she specialized in portraying eccentric older women. She received her first Golden Globe for best supporting actress in 1966 for her portrayal of Natalie Wood's mother in Damned, Sweet World . For Rosemary's Baby , in which she plays a friendly-looking, somewhat curious lady in a darkly comedic performance who secretly wants to exploit her neighbor Rosemarie for a satanic cult, she was awarded an Oscar in 1969 for best supporting actress and another Golden Globe. In the 1969 thriller A Widow Murders Quietly, she mimed the antagonist of Geraldine Page . Her best-known appearances include the lead role of the unconventional and fun-loving artist Maude in Hal Ashby's 1971 tragicomedy Harold and Maude , which is now a cult film. In the films The Man from San Fernando and Full Throttle to San Fernando , she appeared as Clint Eastwood's mother.

In addition to her film appearances, Gordon was also repeatedly active on television. In the Columbo episode Age Doesn't Protect Against Murder , she played an old writer who kills her niece's alleged murderer with the help of a vault. In old age she was also known for her humorous appearances on talk shows, in 1977 she even took over the moderation of Saturday Night Live for one evening . Ruth Gordon worked as an actress until her death, her last film The Trouble with Spies (1987) with Donald Sutherland , which was shot a few weeks before her death , was released posthumously.

In her first marriage, Ruth Gordon was married to the actor Gregory Kelly from 1921, who died only six years later at the age of 36. From an affair with Broadway producer and screenwriter Jed Harris , she had a son named Jones in Paris in 1929 . Since Harris was married, she initially kept the birth secret from the public. From 1942 until her death, she was married to the much younger author Garson Kanin . Ruth Gordon died of a stroke at her summer home in Massachusetts in 1985 at the age of 88.