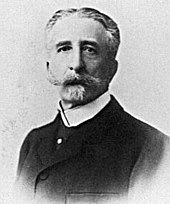 After attending school, he studied law at the Ionian Academy , which he graduated with a diploma in 1861. He then continued his studies at the Faculty of Law at the Sorbonne in Paris . After returning to Corfu, he worked as a lawyer.

Theotokis began his political career in 1879 when he was elected mayor of Corfu with 65 percent of the vote. In 1883 he was re-elected mayor, but in 1885 he renounced this office and was elected member of the National Assembly (Voulí ton Ellínon) for the party of Prime Minister Charilaos Trikoupis . Later he was from 1898 as the successor to Trikoupis chairman of the Liberal Party (Neoteristikon comma).

Statue of Georgios Theotokis in Corfu .

On May 21, 1886, Prime Minister Trikoupis appointed him Minister of the Navy in his cabinet. In his tenure, which lasted until November 5, 1890, he modernized the Greek Navy by purchasing the modern frigates “ Spetses ”, “ Hydra ” and “ Psara ” and by improving training by establishing naval schools.

In the later cabinet of Trikoupis (June 1892 to May 1893 and November 1893 to January 1895) he was Minister for Church and Public Education. In this office he prepared a legislative initiative to modernize the school system, which failed because of the opposition to Theodoros Deligiannis .

At his death, Theotokis was Minister for National Economy in the cabinet of Prime Minister Stefanos Skouloudis.

During his tenure, he implemented an army reform and continued the modernization of the navy that he had begun as Minister of the Navy .

In later years he advocated a moderate foreign policy as a member of parliament, particularly during the Balkan wars from 1912 to 1913.