Mariaviten is a redirect to this article. For a further meaning see Old Catholic Church of the Mariavites . 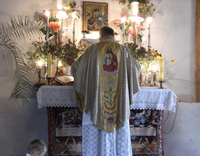 The Mariavite Church is a religious movement that in 1893 in Russian Poland had its origin and first within the Roman Catholic Church was located until 1904, the recognition was rejected by the pope.

Poland was divided between Russia , Prussia and Austria at the time of the emergence of the Mariavite movement . After the Polish uprising in January 1863, the tsarist authorities forbade the establishment of Polish national organizations and all non-Orthodox monasteries and communities. Because they were unlawful under Russian law, many Roman Catholic monasteries were closed. During this period the burgeoning Mariavite movement was one of many Roman Catholic congregations. Because of the veneration Feliksa Kozłowska enjoyed for her private revelations, the Polish bishops intervened against her. Their liturgy is a Polish or Lithuanian translation of the Roman.

Maria Franciszka Kozłowska is said to have received visions in 1893 . On August 2, 1893, the "Mariavite" movement was founded. The name “Mariaviten” derives from the Latin Mariae vitam imitans (“emulating the life of Mary”) or from Mariae vitae cultores (“worshiper of the life of Mary”).

Kozlowska's visions between 1893 and 1918 were published in 1922 in the anthology “Dzieło Wielkiego Miłosierdzia” - “Work of great grace”. Along with the Bible, these “revelations” are the spiritual source of the Mariavites. In the visions, Feliksa Kozłowska fights against the moral decline of the world, especially that of the clergy . In the first vision it was ordered to reorganize the order of the Catholic clergy. Holy Communion is the most important sacrament for baptized Christians. The Mariavites undertook to disseminate the content of these private revelations .

Feliksa Kozłowska and the priests close to her saw the Mariavite movement as an instrument of God for internal mission and reform in the Catholic Church. The Bishop of Płock initiated the approbation of the Mariavites and instructed their leadership to send the documents to Rome. A month later Pope Pius X received their delegation. At the same time, the Mariavites elected Jan Maria Michał Kowalski as the first general minister. In June 1904 another delegation then traveled to Rome and again presented to the Curia the importance and urgency of their mission, so that Pius X promised the recognition of the congregation.

From 1972 to 1974 the Jesuit Stanisław Bajko visited the Order of Mary on behalf of the Pontifical Council for Promoting Christian Unity . The reason for and the result of the review are unknown.

Old Catholic Church of the Mariavites

From 1909 the Old Catholic Church of the Mariavites was a member of the Union of Utrecht , but was excluded from the Union in 1924 due to the tendencies not tolerated by the Union. The reason was so-called mystical marriages between priests and nuns. In 1935 the church split into two branches:

On April 1, 2014, it was decided to re-admit the Old Catholic Church of the Mariavites to the Union of Utrecht, although membership will only come into force when the Mariavite bishops sign the agreement, which includes certain voluntary commitments on the part of the Mariavites.

Order of the Mariavites in Germany - foreign jurisdiction

Head of the Order of the Mariavites - foreign jurisdiction