The Pont du Gard ( Occitan Pònt de Gard ) is a Roman aqueduct in the south of France in the municipality of Vers-Pont-du-Gard in the Gard department . The bridge is of impressive height and represents one of the best-preserved water channels from Roman times in France. The Pont du Gard is one of the most important preserved bridge structures of the ancient Roman world and is one of the most important sights in southern France .

Pont du Gard translates as Gard Bridge . The river Gard is now mostly called Gardon , from which the name of the department is derived .

Description of the bridge

The Pont du Gard was part of an approximately 50 km long aqueduct, with which water was transported from the springs near Ucetia ( Uzès ) to the Roman city of Nemausus ( Nîmes ). The bridge is 49 m high and has three floors:

The rectangular channel of the aqueduct runs on the upper level, which is 1.80 m high and 1.20 m wide and has a gradient of 0.4 percent.

On the lower and middle floor of the bridge there are arcades made of 61 wedge stones weighing up to 6 t. The pillars of the middle level are placed exactly on the pillars of the lower floor in order to minimize the stress on the lower arches. Starting from the middle, the arch span becomes smaller and smaller towards the bank.

History of the bridge and the aqueduct

The aqueduct runs from Uzès to Nîmes 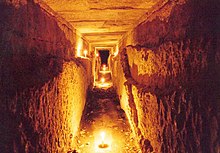 The inside of the aqueduct

Detail of the ashlar masonry (pillar below)

Pont du Gard from the western perspective of the river Gardon

For a long time it was believed that the aqueduct was around 19 BC. Was built. More recent excavations, however, indicate an emergence in the middle of the 1st century AD. The bridge was built to cross the valley of the Gardon River (which was called Vardo fluvius in Roman times ). After completion, about 20,000 cubic meters of water flowed daily via the aqueduct to Nemausus, which at the time had about 20,000 inhabitants. According to this, one cubic meter of water was theoretically available to every inhabitant every day.

About two thirds of the aqueduct did not run above ground, but a canal had to be cut into the rock. The entire aqueduct had an average gradient of 34 cm / km. How the civil engineers at that time made such an exact calculation is still unclear today. The aqueduct to Nemausus is not straight. The straight line between source and destination is only 20 km, but there are various mountain formations in between. So you had to make big detours and came to a total length of 50 km. Nevertheless, the total difference in height over these 50 km is not more than 12 m, even though the construction also had to take into account the special structural requirements of the individual sections.

Since the 4th century, the maintenance of the aqueduct was visibly neglected, deposits filled up to two thirds of the water channel. In the course of the 9th century, the aqueduct became completely unusable and the people in the area began to remove the stones from the aqueduct and use them for other purposes.

In medieval times and up to the 18th century, the Pont du Gard was used as a road bridge. The pillars on the second floor were even tapered to facilitate the flow of traffic. In 1702 the pillars were repaired. So that traffic could cross the river without further stressing the Roman structure, a new road bridge was built next to the aqueduct in 1747, which runs at the level of the lower level of the aqueduct.

This road bridge has now been closed to car traffic. The same applies to the middle level, which was previously used by pedestrians to cross.

The aqueduct Pont du Gard in 1985 in the UNESCO the list World Heritage added.

A modern visitor center with a museum , souvenir shop and parking spaces have been set up within walking distance of the Pont du Gard .

The Pont du Gard aqueduct is built in opus quadratum (Roman square construction), that is, Cretan limestones were used, all of which were of the same height and were extracted from quarries in Vers Pont du Gard. The building material consisted of coarse, yellow Uronian limestone, whereby no mortar had to be used, because the stones are held together by the existing pressure and the resulting friction forces .

Everywhere on the masonry, irregular stones protrude, to which the scaffolding was anchored during construction. They were probably left standing after completion so that they could be used again in the event of repairs. But it is also possible that the facade was no longer straightened in the end due to lack of money and the protruding stones were therefore left.

Panoramic picture of the Pont du Gard (from the south)

Panorama at the Pont du Gard over the course of the river Gardon and the street level of the bridge, which in the 1950s still served the traffic from Avignon to Alès