The title of this article is ambiguous. Further meanings are listed under Atahualpa (disambiguation) . 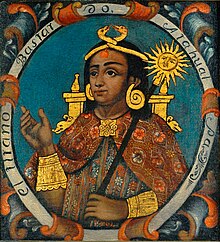 Atahualpa (after Peruvian Quechua spelling Atawallpa , also Ataw Wallpa , * around 1500 , † July 26, 1533 in Cajamarca ) was the last ruler of the Inca Empire . He was the son of the Inca king Huayna Cápac and the daughter of a local ruler from what is now Quito , whose territory had been conquered by the Incas under Túpac Yupanqui . After his death in 1527, a civil war broke out between him and his half-brother Huáscar over the succession. In November 1532, just as the war had ended with Atahualpa's victory, he was captured by the Spaniards under the leadership of Francisco Pizarro and executed despite paying a huge ransom . With his death, the Inca Empire collapsed and became a colony of Spain.

Atahualpa was born and raised in the north of the Inca Empire, presumably in Quito. The area had only been conquered a few decades earlier. Atahualpa's father, Huayna Cápac, often stayed in the north to suppress rebellions and expand the empire and had his best generals there.

Around 1525, Huayna Cápac and his son and designated successor Ninan Cuyuchi died almost simultaneously from an epidemic that hit the Inca Empire. Presumably it was one of the diseases that Europeans brought to America and that preceded them. Huayna Cápac's son Huáscar, who resided in the capital Cusco , was named the new Sapa Inca. Atahualpa stayed in the north with Huayna Cápac's battle-hardened troops. Presumably he had the role of provincial governor; however, some chroniclers report that Huayna Cápac divided his empire. How the relationship between Huáscar and Atahualpa developed is unclear; Both the Spanish chroniclers and the contemporary witnesses they interviewed were often interested in portraying Atahualpa and Huáscar in a good or bad light.

It is reported that Atahualpa sent an embassy to the capital in 1529 and Huáscar humiliated Atahualpa by sending one of the messengers back to him in women's clothes and executing the rest of the embassy. The fraternal dispute then escalated into a civil war. Huáscar had the nobility of the capital Cusco behind him; Atahualpa, on the other hand, was able to rely on the army of the north with its generals Quizquiz , Rumiñahui and Chalcuchímac .

Both armies, in which, according to chroniclers like Pedro de Cieza de León, a total of over 300,000 men were under arms, met for the first time in the area of ​​the Kañari tribe (Battle of Ambato), where the Huáscar-loyal Kañari suffered a defeat. In revenge, Atahualpa had a large number of the Kanarian men and boys killed; the Kañari later became important allies of the Spaniards in their conquest of Quito.

Atahualpa's army then continued to advance against Cusco. The Chachapoya , also from Cusco , stood in vain in Atahualpa’s way. In this battle Atahualpa also took the city of Cajamarca, where he resided from then on, while his generals Quizquiz and Chalcuchímac continued to advance. After this renewed victory, the already insecure troops of Huáscar holed up in the area of ​​today's Jauja . But even here the soldiers of Huáscar, this time directly from Cusco, could not hold out for long. Atahualpa's spies, who always reported exactly to him about Huáscar's plans, were of great help in the rapid advance. Even a daughter of Huáscar, who was in love with an Atahualpa officer, worked against her father and sent reports to her lover.

The last meeting of the two parties did not initially seem to have a clear outcome. The fresh troops of Huáscar seemed to be the first to inflict defeat on the tired soldiers of Atahualpa. Huáscar then set fire to the steppe into which Atahualpa's troops had withdrawn. But despite high casualties, the core of the army escaped the fire. The next day, Huáscar tried to deal the fatal blow to Atahualpa's weakened army, but an injured officer fell into the clutches of Atahualpa's generals and tortured him to reveal the battle plan. Then Atahualpa's troops were able to adjust their plans accordingly. The next day they pretended to retreat further and attacked the corps of Huáscar, which Huáscar was leading himself, from the front and rear in a ravine. Huáscar's troops were destroyed and he himself captured.

Atahualpa left it to his generals, namely Quizquiz and Chalcuchímac, to plunder Cusco and to punish the population for their loyalty to Huáscar. In the "purges" that followed, around a quarter to a third of the population of Cusco, including all members of Huáscar's family and his entire court, were cruelly executed. Even babies and unborn children of Huáscar were thrown on the floor, staked or stabbed. As a further "punishment", the mummy Túpac Yupanquis, who had conquered Quito two generations earlier, was dragged out of her palace and burned, which, according to the Incas, irretrievably destroyed the soul of the dead. Atahualpa was now preparing to take over the empire completely and to consolidate its rule, but that was not to come.

Captured by the Spaniards

In April 1532, when the civil war was still ongoing, the Spanish adventurer Francisco Pizarro came with about 160 men to Tumbes , a coastal town on the northern edge of the Inca Empire. Atahualpa learned of their arrival, but underestimated the danger this small group posed. His focus was on the civil war. When they ascended into the Andes in November, he had them watched but not attacked. He intended to enslave them and use their knowledge of weapons and horses.

We met for the first time on the evening of November 15 when a delegation led by Pizarro's brother Hernando appeared in Atahualpa's camp outside the city of Cajamarca. Atahualpa gave the Spaniards a rather frosty reception, but agreed to see Francisco Pizarro in town the next day. In view of the Inca’s enormous armed force, Pizarro saw his only chance to seize the Inca person and prepared an ambush.

On November 16, 1532 Atahualpa was brought to Cajamarca in a long procession with thousands of companions in a sedan chair. While Pizarro and his men hid in the buildings around the central square, the monk Vicente de Valverde met the Inca with an interpreter and began to give Atahualpa a lecture on the Christian faith. When Atahualpa angrily asked him where he got his knowledge from, he handed him the Bible. Some chroniclers report that he put the book to his ear to hear if it could speak. When he heard nothing, he threw the book on the floor. Then Pizarro gave the signal to attack with a cannon shot. When the soldiers suddenly appeared with horses and steel weapons, Atahualpa's entourage was unable to defend himself - those who could not escape were massacred. Several thousand men were killed in this encounter, later called the " Battle of Cajamarca ", while the Spanish suffered almost no casualties. Pizarro personally captured Atahualpa. General Chalcuchimac, who camped nearby, did not intervene.

Atahualpa, who initially assumed he would be killed, took his position calmly. He quickly recognized the Spaniards' greed for gold and made Pizarro an offer: For his release, he would have the room he was currently in filled with gold objects to the height that he could reach with an outstretched hand, and that adjacent room twice with silver. The larger room was 6.70 m long and 5.18 m wide, a red line marked the height to which the hand of the Incas had reached, namely 2.75 m. Pizarro agreed, and Atahualpa gave orders to raid temples and palaces across the country to collect the ransom and leave the Spaniards undisturbed.

During his eight-month imprisonment, Atahualpa was allowed to attend a court and receive subordinates. He continued to be obeyed unconditionally. He had the captured Huáscar and other half-brothers killed to prevent the Spaniards from taking their side. As the chroniclers unanimously report, he behaved with dignity, was quick to grasp and asked intelligent questions. He befriended Hernando Pizarro and Hernando de Soto . In order to secure Francisco Pizarro's goodwill, he offered him his young sister Quispe Sisa .

Meanwhile, porters brought gold and silver to Cajamarca, and the furnaces burned for weeks to melt the gold and silver jewelry, a total of over 6 tons of gold and 11 tons of silver.

For the Spaniards, however, it was clear that deep in enemy territory, after Atahualpa's release, they would have no chance against his still intact troops. When the rumor arose that an attack was being prepared for them, they decided to get rid of the Inca. In a sham trial chaired by Francisco Pizarro and Diego de Almagro , he was sentenced to death by burning for, among other things, usurpation , idolatry, incest, fratricide and rebellion. When Atahualpa was given assurances that if he were baptized he would not be burned at the stake , he agreed. On July 26, 1533, he was strangled with the garrotto in Cajamarca . He received a Christian burial. This murder was condemned by many Spaniards as a shameful act and later heavily criticized by the Spanish king, but not punished.

After Atahualpa's execution, Pizarro first installed Túpac Huallpa from the Cusco faction as the highest Inca . When he died soon afterwards, Pizarro crowned Manco as the new ruler. Both cooperated with the Spaniards. Atahualpa's General Quizquiz, which was still occupying Cusco, offered resistance but could not prevent Pizarro from taking the capital in November 1533 .

Atahualpa's body was exhumed by troops from Quito - possibly on the orders of General Rumiñahui -, brought to Quito and buried there. Rumiñahui had Atahualpa's brother Quilliscacha killed at the funeral services and took power in the north himself.

On the day of his execution, Atahualpa asked Pizarro to take care of his children. When Quito was conquered the following year, Pizarro had Atahualpa's three sons and two daughters brought to the Dominicans in Cusco. Two of these sons - Diego Illaquita and Francisco Ninancoro - later received a lifelong pension from the Spanish king and lived with their brother Juan Quispe-Tupac in Cusco. Two other sons - Carlos and Francisco Tupac-Apauchi - and a daughter were raised by the Franciscans in Quito. Carlos later received an encomienda from the royal special envoy Pedro de la Gasca , and Francisco received a royal pension, which made him a rich man.

“Atabalipa [Atahualpa] was a handsome Indian with a good disposition, of medium size, not too fat, with a beautiful and serious face, determined eyes, very feared by his people. (…) In all of Pirú [Peru] I have not seen an Indian who could match Atabalipa in cruelty and authority. "

In the German-speaking area, Jakob Wassermann influenced the image of Atahualpa with his story Das Gold von Caxamalca . Wassermann's story makes Atahualpa the prototypical figure of the noble savage of childlike innocence and purity. Wassermann used the book Conquest of Peru by William Hickling Prescott from 1847 as a source .

The Argentine songwriter Atahualpa Yupanqui (born as Héctor Roberto Chavero) chose his stage name as a tribute to the Inca ruler.