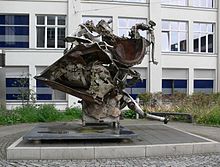 Frank Stella (born May 12, 1936 in Malden , Massachusetts ) is an American painter , sculptor and object artist . He is one of the representatives of analytical painting , hard edge and color field painting .

Frank Stella attended Phillips Academy High School in Andover from 1950 to 1954 , where he met the minimalist sculptor Carl Andre and the filmmaker Hollis Frampton . After graduating from school, he studied history at Princeton University in New Jersey from 1954 to 1958 ; he also took painting courses with William C. Seitz and Stephen Greene. After graduating with a bachelor's degree in history, he moved to New York in 1958. In 1961 he married the art historian and critic Barbara Rose .

Based on the casual style of action painting and the abstract expressionists around Jackson Pollock or Franz Kline , Stella was looking for a "calmer", more meditative visual language, which he soon found in Barnett Newman's color fields and in the so-called Target Paintings by Jasper Johns . Particularly impressed by Mark Rothko , he subsequently succeeded in increasingly geometrizing the shape and reducing the color.

Stella achieved a public sensation through his provocative thematization and reception of National Socialist set pieces with precarious titles such as Arbeit macht frei (1958), the opening motto of the Auschwitz concentration camp or Die Fahne Hoch! (1959), named after the first stanza of the Horst Wessel song . In these works, which he called Black Paintings , Stella used a geometry similar to that found in the symbolism of the terrorist regime, but avoided the possibility of association by renouncing color. In 1959, the progressive gallery owner Leo Castelli became aware of the young Stella and included him in his catalog. In 1960 the first solo exhibition followed in the "Leo Castelli Gallery" in New York. 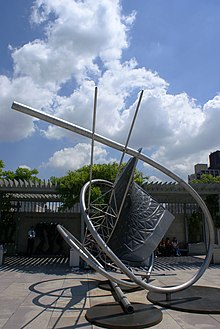 From 1960, Stella began to experiment with picture carriers of any shape, on which - in contrast to the series of Black Paintings from 1958 - he arranged regular colored lines interrupted by white space. In doing so, he overcame the “classic” image format. He referred to this series as Shaped Canvases , because they ignored the traditional right-angled canvas format and removed the apparent limitation of two-dimensional painting by the component of space. With this new and unusual amalgamation of painting and sculpture, he became a co-founder of a new conception of art. In addition to a broader range of colors, he worked in the following years with L-, N-, U- and T-shaped arrangements until he came to completely irregular, curvy arrangements, the so-called irregular polygons (from 1965). The Protractor Series (Protractor = protractor) was created from 1967 to 1971 . Here Stella worked with semicircular, color-fanned arrangements that are reminiscent of color circles. In 1961, during his first trip to Europe, Stella had his first European solo exhibition in the “Galerie Lawrence” in Paris . Together with Henry Geldzahler he went on a trip to Persia in 1963 .

At times, in the late 1960s, Stella returned to the limitations of the square format and experimented with spectrally arranged areas of color in works such as Sunset Beach (1967) in order to achieve an optical depth effect. His imagery resembled his older contemporary, Kenneth Noland . At the end of the 1960s, the Gemini series (1967) also produced his first lithographs . In some of these works he used aluminum and copper paints. In collaboration with Merce Cunningham , Stella designed stage decorations. In 1968 he took part in the 4th documenta in Kassel ; A first retrospective followed in 1970 at the Museum of Modern Art .

With the Polish Villages series (1971–1973), Stella made a change in style and technology: The assemblage came to the fore, with the large-format, three-dimensional works in their material language ( wooden material , cardboard, metal, etc.) increasingly architectural models or Reliefs were similar. In 1972 Frank Stella took part in the Venice Biennale , followed in 1977 in documenta 6 in Kassel . In 1976 he was immortalized on a BMW Art Car , which also took part in the Le Mans 24-hour race . During the 1970s, Stella abandoned his minimalist imagery and turned to artistic maximalism : His forms became “ baroque ”, more curvaceous, more dynamic and more plastic. This “calculated-arbitrary” style, which he developed in the mid-1980s, was to be retained until the 1990s, when he finally took the step towards large-format sculpture in public spaces . In 1982 he was represented at the group exhibition Zeitgeist . From 1990 onwards, Stella was primarily concerned with the architectural implementation of his works. His concept for the design of an art gallery in Dresden in 1991 was not implemented. In 1992/93 he designed the Princess of Wales Theater in Toronto , and in 1996 the foyer in the new Axel Springer building in Hamburg. In 2001, Stella's monumental sculpture Prince Friedrich von Homburg, Ein Schauspiel, 3X was installed on the northeast side of the National Gallery of Art in Washington, DC .

At first Stella tried to reduce it to a minimum. He explained himself as follows: "All I want to know from my pictures ... is that you can see the whole idea without any confusion." The structure of his pictures is not based on geometrical proportions as in Mondrian , Ellsworth Kelly or Josef Albers . In contrast to these, his pictures work with all-over painting , a principle that he continuously repeats in his early Black Paintings until the painted lines reach the limits of the canvas and ultimately even “leave” the canvas in the 1960s.

The art historian Karin Thomas writes about Stella's color field painting: "With Stella, the space-grading properties of the individual colors, as they were already recognized by Auguste Herbin , develop freely, so that the color surfaces are divided into different spatial zones." black series ”, 21 of which were created between autumn 1958 and spring 1960, Stella finally said goodbye to the “ basic principle of European image organization, to the process of composing. ” These images tend to be object-like. The picture is no longer a representation, but a thing.