The title of this article is ambiguous. For the German major general of the Wehrmacht in World War II, see Carl André (1894–1985).

Carl Andre (born September 16, 1935 , in Quincy , Massachusetts ) is an American sculptor of minimalism .

From 1951 to 1953, Carl Andre attended the prestigious Phillips Academy boarding school in Andover, Massachusetts , where he received the only formal art lessons of his life from Patrick and Maud Morgan. Andre became friends with Hollis Frampton . Studies at Kenyon College , Ohio were dropped out early. In 1954 Andre visited England and France, from 1955 to 1956 he did his military service in Fort Bragg , North Carolina.

He moved to New York in 1957, where Hollis Frampton introduced him to Frank Stella , who had also attended Phillips Academy. Andre worked in Stella's studio from 1958–60. Frampton also drew his attention to Ezra Pound , in whose essays he came across Constantin Brancusi . The first wooden sculptures were created, but the work was apparently burned by a new tenant. There were nine pyramids made of pre-cut logs that were stacked together to form a solid structure. In 1970 Andre built one of these pyramids. It is now in the Dallas Art Museum. 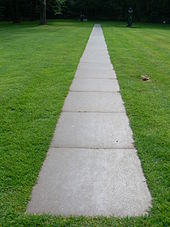 From 1960 to 1964 he worked on the Pennsylvania Railroad in New Jersey as a brakeman on freight trains and a conductor, a period in which he had no money, space or time for sculpting, but which he considered extraordinary for the development of his artistic intentions has been considered important. Typewriter poems constructed from found texts according to various random principles date from this period. In New Jersey he met Robert Smithson , with whom he went hiking in the area. Andre's first solo exhibition took place in 1965 at the Tibor de Nagy Gallery in New York. As a result, his work was shown in well-known museums and galleries. In October 1966 he took part in exhibition 10 at the (Virginia) Dwan Gallery with Ad Reinhardt , Robert Smithson, Robert Morris , Agnes Martin , Jo Baer , Dan Flavin , Michael Steiner, Sol Le Witt and Donald Judd . On July 23, 1963, Heiner Friedrich opened the Friedrich & Dahlem gallery in Munich with Franz Dahlem and his wife Six . In addition to some minimal , land art and conceptual artists who were still unknown at the time , the Friedrich Gallery also showed the first floor sculptures by Carl Andre in 1968. The Darmstadt entrepreneur Karl Ströher acquired three important works by Andre from Friedrich's exhibition in order to make them available on loan to the Hessisches Landesmuseum Darmstadt . The municipal museum in Mönchengladbach then showed works by Andre at the end of 1968.

In March 1969 Andre took part in Harald Szeemann 's "legendary" exhibition Live in your head: When Attitudes become Form at the Kunsthalle Bern . The exhibition then traveled from the Kunsthalle Bern to the Museum Haus Lange in Krefeld and the Institute of Contemporary Arts in London. In 1968 his work could be seen at the 4th documenta in Kassel , 1970 at the Guggenheim Museum in New York, 1977 at documenta 6 in Kassel, 1981 at Westkunst in Cologne, 1982 at documenta 7 in Kassel, 1987 at the Van Abbemuseum in Eindhoven, 1994 in Brussels in the Musée des Beaux-Arts , 1996 in the Museum of Modern Art in Oxford, England, 1997 in the Musée Cantini in Marseille and in the same year in Germany in the synagogue in Stommeln . In 1981 Peter Iden acquired three floor works Andres together with a further 84 works from Karl Ströher's collection for the Museum of Modern Art in Frankfurt. The works have since been shown in various exhibitions between 1991 and 2002 in the Frankfurt Museum and internationally. In 2011 Andre was awarded the highly endowed Roswitha Haftmann Prize . In 2015 he was elected to the American Academy of Arts and Sciences .

In 1985 Andre married the Cuban-American artist Ana Mendieta . On September 8, 1985, Mendieta fell out of the window of their New York apartment on the 34th floor. Carl Andre was acquitted of the murder charge in 1988. The death of Mendieta is still unclear to this day.

Andre is one of the most important representatives of minimalism. Of the artists of his time, he particularly valued Frank Stella, with whom he worked in 1958/59, and above all Constantin Brâncuși , with whose sculpture Endless Column he had long and intensively studied. Brâncuși is seen by some art historians as a forerunner of Minimal Art, while Andre's first sculpture, the nine layered pyramids, is classified as the first minimalist work at all. Andre's early work revolves around the problem of a cut in space , and he sees related tendencies in Brâncuși's work. In the following works he concentrated on large-scale arrangements of lines, reliefs or surfaces made of various materials, such as unprocessed wood, wooden planks, bricks, granite blocks, pieces of chalk or flat steel and copper plates, which occasionally overlap into adjacent rooms.

Since the mid-1960s Andre has concentrated on extremely flat sculptures: fields that consist of square or rectangular plates made of various materials such as copper, lead, aluminum, steel, etc., which are laid edge to edge, which therefore do not cast any shadows which can be entered by the viewer. The sensual perception of the viewer who enters the field, feels the different materials under his feet, hears the different sounds and tones when stepping on the different panels and who can see the changes in the light on the materials through his own shadow, is reflected in Andre's sculptures required. Andre calls his sculptures roads , streets, and zones , zones or areas. This means that both the space around the work of art and above the work of art is part of it, which the viewer does not face at a distance, frontal, but that he is in the space of the work of art itself, which he perceives from within with all his senses.

In addition to dealing with the phenomenon of space, a constant in Andres' work is his attention and sensitivity to the various materials, for example raw, little processed wood. Another constant in his artistic work is playing with language and words.