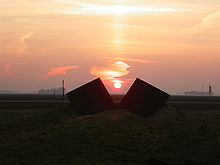 Sunrise at the observatory, spring 2005

Together with Donald Judd, Morris is considered to be one of the most important representatives of minimalism . He made important contributions to the development of performance , land art , process art and installation .

Entrance to the hospital in Pistoia , Italy (2005)

Morris' works from 1955 to 1959 were initially strongly influenced by Abstract Expressionism , especially Jackson Pollock . A photograph of Hans Namuth showing Pollock at work gave him the idea that art is the recording of an artist's performance in the studio; this led to his interest in dance and choreography. This included E.g. a performance in which, based on the exploration of bodies in space, a vertical column falls on the stage after a few minutes. Morris used the same idea in his first minimalist sculptures, Two Columns (1961) and L Beams (1965). From 1963 to 1970 he composed and staged dance pieces and worked on film and theater projects.

In 1963, Morris worked with thin lead plates, which he stamped, cut, inscribed and combined with paper, wood and metal parts such as locks and keys. Three of his lead paintings were donated to the Museum of Modern Art (MoMA) in New York City by Philip Johnson .

One of his most famous land art works is the “observatory” with a diameter of 91 meters. It is located in the Dutch province of Flevoland . Morris made it out of earth, wood, steel and granite. He stages the solstice in an archaic, double-ring layout that is modeled on a boldly reconstructed Stonehenge .