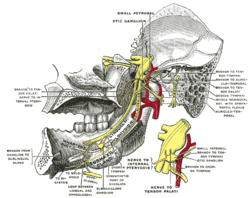 Course of the mandibular nerve in humans

The mandibular nerve ("mandibular nerve ", from Latin mandibula " lower jaw ") is the third of the three main branches of the fifth cranial nerve , the trigeminal nerve , and is abbreviated as V 3 . It sensitively supplies the lower facial region and the tongue , with motor fibers it controls the chewing and parts of the floor of the mouth muscles as well as the tensioners of the eardrum ( tensor tympani muscle ) and the soft palate ( tensor veli palatini muscle ). Historically, it is the first branchial arch nerve .

After passing through the trigeminal ganglion , in which the sensitive nerve cell bodies are located, the mandibular nerve leaves the cranial cavity through the foramen ovale (in some animals such as horses and pigs : Incisura ovalis of the foramen lacerum ). It divides into several branches below the base of the skull. The mandibular nerve has close topographical relationships with the otic ganglion , which it uses as a distribution station.

The ramus meningeus ( meningeal branch ) pulls back into the cranial cavity with the arteria meningea media through the foramen spinosum and supplies the meninges .

The buccal nerve (cheek nerve) is sensitive and supplies the mucous membrane of the cheeks and the gums . The nerve has connections to the facial nerve and carries parasympathetic fibers of this nerve to the cheek glands. 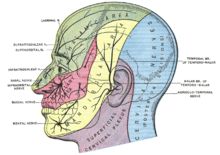 The sensitive supply area of ​​the mandibular nerve (yellow) includes the lower jaw, the cheek and the temple.

The auriculotemporal nerve ("ear-temple-nerve") is responsible for the sensitive innervation of the auricle , parts of the ear canal and eardrum as well as the skin of the temples. Via a connecting branch to the facial nerve , it feeds its rami buccales sensitive fibers to supply the masseter area. In addition, the auriculotemporal nerve is connected to the otic ganglion , where it receives parasympathetic fibers of the glossopharyngeal nerve via the Jacobson anastomosis and leads them to the parotid gland .

The lingual nerve ( tongue nerve) is responsible for the sensitive (touch, pain, temperature) supply to the front two thirds of the tongue (the rear third is innervated by the glossopharyngeal nerve ). In the tongue nerve, taste fibers (sensory fibers) run from the chorda tympani , which supply the taste buds of the two front thirds of the tongue. He also gets parasympathetic fibers from the chorda tympani , which are switched in the submandibular ganglion (called the mandibular ganglion in animals ) and supply the lower salivary glands ( sublingual and mandibular gland ).

The mylohyoid nerve is a branch of the inferior alveolar nerve and is released from it directly before it enters the mandibular foramen. Motorically, it innervates the muscle of the same name ( Musculus mylohyoideus ) and the anterior abdomen of the Musculus digastricus as well as sensitively the skin of the pharynx.