A distinction is made between an outer and an inner epithelial body. Both are in pairs. In birds there can also be three pairs (e.g. in the chicken ). Healthy parathyroid glands weigh between approximately 30 mg in men and 35 mg in women. These glands are not visible and cannot be felt on physical examination. The parathyroid glands are named because of their proximity to the thyroid gland, but have nothing to do with it functionally. In addition, this positional relationship to the thyroid is particularly pronounced in humans, but in many mammals the position is much more variable (in carnivores directly next to each other, in herbivores separated), which is why the term epithelial body is preferred in comparative anatomy .

The outer or upper epithelial body ( glandula parathyroidea externa / superior ) arises embryonically from the fourth pharynx of the gill arch . In some species it is relatively far from the thyroid gland , in horses in front of the breast entrance, in cloven-hoofed animals at the junction of the carotid artery .

The inner or lower epithelial body ( glandula parathyroidea interna / inferior ) arises from the third pharynx and is usually located in, in humans often slightly below the thyroid gland.

The epithelial bodies are surrounded by a delicate connective tissue capsule from which fine septa emanate. The epithelial cells are arranged like strands. The main cells produce parathyroid hormone (PTH). Parathyroid hormone, as an antagonist of calcitonin , increases the calcium concentration in the blood by indirectly activating osteoclasts . In addition to the main cells, there are oxyphilic cells , the number of which increases with age. Their function is not known. The main function of the parathyroid glands is to keep the body's calcium and phosphate levels within a narrow range.

Examination of the parathyroid glands

To measure the function of the parathyroid gland, the following values ​​are determined: 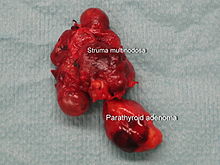 The most important disease of the parathyroid gland is hyperfunction, hyperparathyroidism (HPT). The most common causes are tumors and hyperplasia of the glandular tissue. Both benign adenomas or malignant adenocarcinomas can occur. When house dog a third of parathyroid tumors are about malignant.

Underfunctions of the parathyroid gland are less common ( hypoparathyroidism , parathyroid insufficiency); these are usually iatrogenic , e.g. As after thyroid surgery or oversupply of vitamin D . Autoimmune diseases can also trigger hypoparathyroidism. The symptom is a deficiency in parathyroid hormone, which can lead to hypocalcemia with cramps ( tetany ) and heart failure.