Widespread growth on ship hulls with barnacles and algae on a pleasure craft (above) and dense biofilm on a cruise ship (below).

Fouling on a rudder blade (left) and buttress (right).

Under fouling the undesirable settlement of organisms is understood to technical surfaces. This concerns z. B. Hulls, hydraulic systems made of wood, metal and plastic.

Organism communities on living substrates (e.g. snail shells, crustacean shells) are called growth (epibiosis), on non-living, natural and anthropogenic substrates (rocks, driftwood, garbage) they are called growth. The terms fouling and fouling are therefore synonymous. Complex communities stuck on the sea floor can develop into coral reefs, which are of great ecological importance and are aesthetically highly valued by divers and snorkelers, but are fought on ship hulls. Every development of growth on technical surfaces is a recurring fundamental biological process that indicates an intact, living sea.

In shipbuilding , fouling occurs on all surfaces submerged in water, both on the hull itself and on propellers, sea chests and internal structures that come into contact with seawater (e.g. ballast water tanks, cooling water inlets).

The formation of fouling begins with the formation of a macromolecular film of sugar and protein as soon as a body is exposed to water. This is followed by a settlement of bacteria, for which this film serves as food and promotes their attachment. The colonization by bacteria is followed by microorganisms (unicellular algae, animals and fungi). The substances secreted by this microfouling create a slimy film, a so-called biofilm, which can quickly grow into a thick layer and has a predominantly attractive effect on the pelagic larvae and spores of macroorganisms. 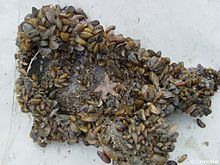 Frying pan with Teflon coating with heavy growth after a season in sea water.

Sessile vegetation organisms are able to attach themselves firmly to very smooth or even greasy surfaces. They cannot be released even by massive mechanical stress. In the case of the aforementioned crustaceans ( barnacles and barnacles ) for a cement gland Cyprislarve, the last pelagic larval stage makes these barnacles. By excreting a very effective adhesive substance, a stable limestone plate forms after the first attachment, which binds the organism to this location for the rest of its life.

Mussels are held by a network of byssus threads that are formed and deposited by a special gland on the foot.

At each end of a Byssus thread there is a strong adhesive that sticks to Teflon itself and thus ensures an extremely good hold. The chemical structure of this substance was clarified in 2004. It is the amino acid L -3,4-dihydroxyphenylalanine ( levodopa ) used in the therapy of Parkinson's disease , which is bound in the adhesive by an Fe 3+ ion in an octahedral complex.

In the case of fouling on hulls, economic damage occurs to the owner and user of the ship. The vegetation increases the weight of the ship and at the same time increases the flow resistance , which can lead to slower travel and up to 30% higher fuel costs. In addition, docking is necessary at shorter intervals and the hull can be damaged. The annual damage caused by fouling is estimated to be at least $ 200 billion.

In order to counteract fouling, so-called antifouling coatings are used, which permanently release toxic substances (biocides) into the water. These are intended to prevent organisms from adhering underwater or, if the larvae come into contact with the ship's hull, lead to their death. Which antifouling is suitable for which areas depends above all on the vegetation intensity of the respective body of water: Limnic waters tend to have a lower vegetation pressure than marine ones.

Balloon growth of an oyster caused by TBT.

Biocides are chemical or biological substances that damage or kill aquatic organisms. In this way you should prevent or delay the development of vegetation. Highly toxic tributyltin compounds (TBT) have been used in particular since the 1970s . After the mass death of oyster larvae and malformations of oysters in French farms along the Atlantic coast as well as hormonal disorders in other organisms were attributed to this poison, national bans were issued from 1989 and an international ban on TBT from 2003 (see legal regulations). Instead, other biocides have continued to be used since then, which also effectively prevent fouling, but also damage other organisms in the aquatic environment. Currently, copper and copper compounds filters (z. B. dicopper , copper pyrithione , copper thiocyanate ) the main Hauptbiozide. Some products also contain zinc oxide , which is not officially defined as a biocide. Other common biocides are zinc pyrithione , zineb , isothiazolinone , dichlofluanid and tolylfluanid as well as tralopyril and medetomidine . Although these biocides are less harmful than TBT, these highly effective compounds are also substances that can have undesirable side effects on aquatic organisms and are difficult to break down.

Some research is aimed at using these and other, not yet approved biocides in nano-size or nano-encapsulated. As an example, tiny nanoparticles made of vanadium (V) oxide are mentioned, which prevent the growth on interfaces. Vanadium pentoxide acts as a catalyst , which forms highly toxic compounds for microorganisms.

Barnacles on a silicone-containing coating that could settle in scratches.

New developments in the field of biocide-free antifouling systems exist in various designs.

Some are based on silicones , so-called silicone FRCs ( Silicone Fouling Release Coatings ). These systems are characterized by an extremely smooth surface as well as highly flexible, cold-resistant, non-erosive and seawater-resistant properties. Theoretically, these systems based purely on physical surface properties can achieve a significantly longer service life than biocide-containing antifouling coatings, in which the active ingredient is released through hydrolysis or removal of the binding agent and thus consumed. The problem with silicones, however, is their susceptibility to mechanical loads, such as those found in shipping z. B. can occur through ice drift, ground contact, tractor contact or during mooring maneuvers.

Devices that can be used to remove the growth on cleanable hard coatings. right: thousandbone.

Recently, some of these hydrophobic silicone coatings have a hydrophilic hydrogel layer that is formed from polymers distributed in the coating when it comes into contact with water. This layer is water-attracting. This makes it more difficult for the organisms to settle, as the boundary layer between the liquid medium water and the solid hull is not clearly defined.

For the sport boat sector, methods are increasingly being developed that are intended to keep the boat hull free of vegetation with the help of mechanical support. For this purpose, cleanable, non-toxic hard coatings are used, which are cleaned at regular intervals with hand-held cleaning devices or automatic "car washes". However, this method of fouling prevention is currently only recommended for fresh water. In seawater the fouling pressure is so strong that the cleaning interval would be too short. However, according to a survey of pleasure craft in Germany from 2014, two thirds of all pleasure craft in Germany are in fresh water.

Numerous studies have shown that TBT in antifouling paints remains in the environment for a long time and is deposited and accumulated in sediments. Due to its high toxicity, it damages aquatic organisms and has a hormonal effect on them and ultimately on people at the end of the food chain.

Therefore, the use of TBT in ship paints was banned in EU regulation 782/2003 and implemented since January 1, 2008 for ships flying the EU flag or calling at EU ports. The same regulation was passed in 2001 by the IMO (International Maritime Organization) and came into force on September 17, 2008, so that TBT is internationally banned as an active ingredient in ship paints. In the following years, the concentrations of TBT in water and sediments decreased, but the permissible limit values ​​are still partly exceeded.

In the Regulation (EU) no. 528/2012 (biocidal Regulation) the future approved active substances to be regulated. Some old biocides such as diuron , chlorothalonil and others have been banned since 2008, as no application has been made for them by the industry. They must no longer be contained in any antifouling product. Out of ten old biocides applied for, zineb, isothiazolinone, copper pyrithione, tolylfluanid and, as new biocides, tralopyril and medetomidine have passed the test and are now approved as antifouling biocides. Cybutryn, better known under the name Irgarol®, was rejected and may no longer be used in antifouling products from January 31, 2017 (EU implementing decision 2016/107 of January 27, 2016). As of March 2nd, 2017, boats coated with Cybutryn will no longer be allowed to be sold and any residual amounts of antifouling products with Cybutryn will have to be disposed of before the deadline (January 31, 2017). Old stocks that contained Cybutryn until a few years ago may no longer be used.

Body of a Schiffsbohrwurms (left) and his way of life in a Duckdalben from larch after four years of use in Norderneyer port (right).

Fouling was particularly harmful on wooden sea-going vessels such as those used until the 20th century. A lot was deposited on the wooden planks. Since ancient times, for example in the Roman Empire, the underwater area of ​​ships has been covered with lead sheets to prevent fouling. Lead is soft enough to be hammered on woody surfaces. This technique was documented on the Nemi ships . In the 18th century, the ships were increasingly covered with copper plates. This also protected from the shipworm Teredo navalis , a wood-boring mussel species.