As wood pests are organisms referred to, which are, because of their biological properties capable of wood damaging or destroying. As a rule, this happens in the context of food intake or the establishment of a dwelling or hatchery. The decomposition of organic matter (wood) also makes an important contribution to maintaining the material cycle of our ecosystems . The designation as “ pest ” occurs if wood used by humans is affected during this activity, which loses its functionality or its value as a result.

Certain types of insects and fungi are by far the most important pests of wood . In addition, under special conditions, wood can also be affected by bacteria or e.g. B. drilling mussels are attacked.

The animal wood pests in our latitudes mainly include insects, especially some representatives of the longhorn beetles , such as the house longhorn beetle , or the common rodent beetle , better known under the name "woodworm".

A distinction is made between fresh wood and dry wood insects . The former can only develop in fresh wood , i.e. living trees or freshly felled wood, while dry wood insects usually attack dry wood, i.e. standing dead wood in the natural environment , but also construction wood , e.g. B. Furniture or built-in wood in roof structures and half-timbered houses. Wood pests that attack the living tree and endanger its health are explained in more detail under Forest pests . Wood pests, on the other hand, which only devalue the wood of standing or freshly felled trees, are referred to as technical pests in forestry .

A basic distinction should be made between insects that damage fresh wood and dry wood. In our regions, for the construction and can work wood relevant wood-destroying beetles and larvae assign your most following different families:

Wood damage caused by longhorn beetles is caused by the larvae that develop or pupate in the wood , while the adult beetle does no damage. Most longhorn beetles are insects that attack fresh or damp wood, which often leads to incorrect interpretations. So z. B. the variable Schönbock , which is often brought into the houses with firewood, poses no danger to built-up wood. It needs fresh barked dead wood for the development of its larvae, which cause the wood damage. Various longhorn beetles such as the Mulmbock or the Greater Oak Buck have caused damage to various degrees in the past, but are so rare today that they are under protection. The longhorn beetle also includes the longhorn beetle (Hylotrupes bajulus) , the most important dry wood pest on our continent. 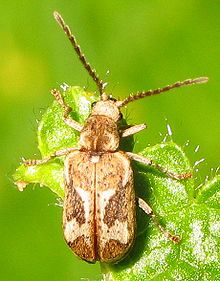 The defiant head beetle (Hadrobregmus pertinax) and the colorful or pied rodent beetle (Xestobium rufovillosum) often occur as secondary pests, as they only attack wood that has already been damaged by fungi .

The sapwood beetle species , first and foremost the brown sapwood beetle (Lyctus brunneus) , are important because they damage imported wood but also native hardwood species. In contrast to most other wood-destroying insects, sapwood beetles can also attack very dry wood. This results in a high potential for economic damage or damage to valuable cultural goods, especially in the area of ​​the imported wood processing industry and museums.

The borer , like the Powder post beetle lovers of tropical timber, especially here would be the borers (Bostrychus capucinus) and the bamboo drill (Dinoderus minutus) to name.

Only very rarely and sporadically in Germany and therefore of little importance here as a wood pest. However, in warmer climates, some species of termites cause severe damage to wooden structures.

Insects that do not damage wood, or only to a very limited extent

In addition, some insects that inhabit dry wood or only insects that damage wood to a very limited extent are mentioned here.

The wood wasps are fresh wood insects and do not lay their eggs in dry wood. However, if the wood is felled and used only after the eggs have been laid, the larvae can develop and pupate in built-in wood. After hatching, the insect eats its way outwards and can e.g. B. cause damage to sealing layers, vapor barriers, etc. 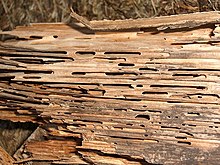 The ball or humpback beetle ( Gibbium psylloides ) can often be found in older houses with wooden beam ceilings and cavity fillings, where they create nesting places in the wood. However, their significance as a material pest usually takes a back seat to their significance as a nuisance . Especially after old buildings have been renovated or refurbished, the Beetle appears en masse and reduces the quality of living. Some other species of beetle occur in a similar manner, in particular the brass beetle ( Niptus hololeucus , family of rodent beetles (Ptinidae)) in half-timbered buildings.

Wooden ship hulls in particular are overgrown by various organisms on their way. This is called fouling . Most of these species do not damage the wood itself, but the shipworm ( Teredo navalis ), a mussel , does a lot of damage to the wood.

The common fungal wood pests include - in relation to buildings - the real dry rot , the brown cellar sponge and the white pore sponge .

When attempting to systematize fungal wood pests, a division into the characteristic signs of destruction makes sense:

The brown rot (destructive rot ) initially destroys the cellulose of the wood substance. The main components of wood are light and dark substances. Since cellulose is one of the light-colored components of wood, the brownish substances remain. Correspondingly, the affected wood changes color from dark to brown and in some cases the characteristic transverse cracks are also visible ( cube fragility ).

The white rot initially destroys the lignin of the wood substance. The main components of wood are light and dark substances. Since cellulose is one of the light-colored components of wood, white, fibrous, destroyed wood remains.

However, some fungi also attack both wood components (lignin and cellulose) at the same time and are therefore referred to as so-called simultaneous rot.

In addition to the above-mentioned wood-destroying fungi ( wood rot ) there are also fungi that do not cause rot, i.e. do not attack the wood substance directly, but cause undesirable discoloration. These include blue fungi and sand tan . Such an infestation on the one hand devalues ​​the wood optically, on the other hand bluish fungus can damage the coating of wooden components in the outdoor area (e.g. wooden windows) and thus act as a precursor for subsequent wood rot.

The infestation by some wood pests is notifiable in Germany in some federal states and can represent a serious construction defect according to the BGB. The respective valid state building regulations  (LBO) regulate details about the handling and the reporting obligation in the event of wood infestation in and on buildings.

According to DIN 68 800-4, however, the infestation and extent of the infestation, e.g. B. in the case of real dry rot, to be determined by an expert (preparation of a wood protection examination report). As a rule, such experts also develop renovation proposals.