The Chinese Studies , also known as " China Science " or " Sinology " ( Chinese  漢學  /  汉学 , Pinyin Hanxue  - "Han Customer") discloses a field of language and cultural studies , which in the 16th century was, and with the languages , Writing , politics, society, philosophy , literature , economy and history of the Han ( 漢人  /  汉人 , hànrén  - "Han people").

The beginning of Sinology was made by Christian missionaries who studied the Chinese language and culture for their activities in China. The first translations of Chinese classics appeared in Latin, which is where the name Sinology comes from, since " Sina ", probably derived from the Qín dynasty 221 BC. BC, which is the Latin word for China. Conversely, the missionaries of this time translated the Bible into Chinese and wrote reports about the hitherto little-known China, which Europe received with great interest.

The first chair for Sinology was established in Paris at the beginning of the 19th century. In German-speaking countries there are around 30 universities with facilities for Sinology.

Sinology is still a very young discipline in Germany. It was not until the beginning of the 19th century that people began to study China scientifically. In the years 1829–1831, the orientalist Carl Friedrich Neumann acquired 12,000 Chinese volumes in Guangzhou , which he shipped to Munich and which formed the basis of the East Asian collection of the Bayerische Staatsbibliothek and the Staatsbibliothek zu Berlin . From 1833 Wilhelm Schott taught Chinese and Chinese philosophy in Berlin . Ferdinand von Richthofen's geological and geographical research trips from the early 1860s were groundbreaking in China research . In 1887 the u. a. Establishing a seminar for oriental languages serving Chinese language teaching in Berlin and the first sinological seminars. In 1889 the first German chair for Sinology was established at the University of Leipzig , the first full professor was Hans Georg Conon von der Gabelentz , a chair in Berlin under JJM de Groot followed in 1912 and in 1914 at the Colonial Institute in Hamburg under Otto Franke .

During the colonial period , when the German Empire also owned the Chinese colony of Kiautschou , interest in Chinese culture grew. The exile of many China scholars during the National Socialist era did lasting damage to German Sinology. Since the opening policy of the People's Republic of China in the 1980s, Sinology is no longer one of the orchid subjects in Germany and good career prospects were predicted for newcomers to Sinology at that time. Today, a little less than 200 people (more than 70 percent of them women) graduate each year. Sinologists are neither interpreters nor economists, but there are courses that combine both subjects.

Around 1,900 German and 440 foreign students are currently enrolled in Sinology (including Korean Studies ) in Germany. Less than 500 new students take up the course every year. B. in English studies with 10,000 new students annually are significantly more. The current importance of China and the frequent mention of the country in the German media have partly contributed to the fact that the number of students has increased in recent years, especially in bachelor's degree programs.

As a rule, no previous knowledge is expected for studying Sinology in Germany, but many textbooks are only available in English, which makes knowledge of them advisable. Today it is common to spend part of your studies in China or Taiwan .

The introduction of the bachelor’s degree at several German universities made it possible to significantly reduce the standard period of study to three years, but this shortening is accompanied by a limitation of the course content, which is why a specialization in certain sub-areas of Sinology is necessary in bachelor’s degree programs. For example, B. The Bachelor Modern China in Würzburg focuses on the classical written language and focuses on the recent history and the current social, political, economic and cultural situation in China. In contrast, Heidelberg maps Sinology in its entirety, so that students can choose their focus either in the Classical Written Language or Modern Chinese and have the option of courses from various subject areas such as: B. History, literature, film and music, intellectual history and culture, or the politics, economy and society of today's China. For students who want to deal extensively with China, a master’s degree is available afterwards .

In most Sinology courses, the range of courses in Chinese is not sufficient for a master’s course in the Chinese-speaking area to be included (according to the Chinese Association, this would be 1200–1600 contact hours). Often, due to a lack of staff, language training is still primarily focused on passive reading skills in Chinese. A stay in China is seldom stipulated in the curriculum, but it is recommended for reasons of deepening language skills.

Sinologists who work in the social sciences are particularly aware that their publications can also have an existential effect on their working conditions in the People's Republic of China, as the conditions in the People's Republic of freedom of research differ from those found in Germany, for example. This fact is on the one hand a special challenge for the researchers concerned, but on the other hand it still offers the possibility of gaining knowledge about China in a meta-sinology through the "observation of the observer" ( Niklas Luhmann ). 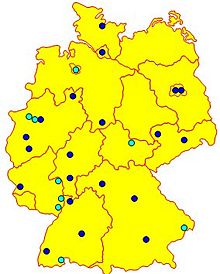