A Carapace is a special form of the construction of the outer skin, as at today, turtles and crocodiles can be found. In these animals, the skin is reinforced by flat plates of bone, the osteoderms . As with crocodiles, these can be embedded in the skin and overgrown by it or, as with most turtles, directly represent the outer covering.

The crocodiles have bone plates mainly on their backs. The uppermost skin layer of the animals, the cornea (stratum corneum), consists of a varying number of layers of collagen fibers . The crocodiles do not molt, the top layer is renewed by simple abrasion.

The horny back scales consist of keeled horn plates, which are known as back shields. Ossified plates lie beneath these shields. Depending on the species, there are four to ten plates lying next to each other, which are arranged in several longitudinal rows, each longitudinal row corresponds to a vertebra of the spine . The shields in the neck of the animals, the nuchal plates, are underlaid with osteoderms and form species-typical patterns. The ventral shields of most species are flat and square and almost all species have no bony plates here. On the tail, the belly shields and the back shields form rings, which in the front area have a scale comb on both sides that merges into a single scale comb towards the tip of the tail. All other parts of the body also have horn shields, in some species bone reinforcements can also form on the extremities, neck and even on the eyelids . The very strongly ossified species in particular are usually rather small and relatively immobile, such as the smooth-fronted caimans (genus Paleosuchus ) and the stump crocodile ( Osteolaemus tetraspis ). The black caiman ( Melanosuchus niger ), however, is one of the large crocodile species, despite its strong armor. Other larger species such as the saltwater crocodile ( Crocodylus porosus ) protect themselves primarily through their size and accordingly have less well-developed bone armor.

The bone shell of the turtles 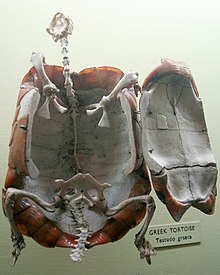 The appearance of the entire tank can vary greatly depending on the type. The back armor in many species has one or three longitudinal keels. This keel is particularly prominent among the mute turtles . Different species (for example the box turtle and the hinge turtle ) can fold up their belly shell with the help of a hinge and thus close the entire shell. A hinge in the carapace of the jointed turtle has a similar function .

Typical diseases of the turtle shell are shell necrosis and shell fracture .