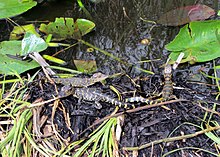 The Mississippi alligator ( Alligator mississippiensis ), also known as the pike alligator , is an alligator that lives in the southeastern United States .

The Mississippi alligator is found in the states of North Carolina , South Carolina , Georgia , Florida , Alabama , Mississippi , Louisiana , Arkansas , Oklahoma, and Texas , where it mostly inhabits slow-flowing freshwater rivers, swamps, marshlands, and lakes. However, there have been sightings in Memphis, Tennessee .

In Florida, the Mississippi alligator occurs in the Everglades National Park , among other places .

The Mississippi alligator grows up to six meters long, but is usually only three and a half to four meters long. The snout of the animals is broad, flat and bluntly rounded at the front. The color is dark, almost black, the young have yellowish transverse bands. The ventral side is dark, but it can also be light.

The food spectrum of the alligators is very large and includes fish , birds , turtles , snails and mammals . Young animals, for which larger prey is still unsuitable, devour insects , spiders , larvae , molluscs and worms . Adult specimens even prey on animals the size of a sheep or a wild boar . Even smaller conspecifics are not safe from them. However, attacks on humans are rare, as alligators shy away from humans.

The Mississippi alligator mating season begins in spring. During this time, the males produce deep barking noises in order to attract the females and keep their competitors at a distance. However, they do not have vocal cords , but make the sounds with their lungs . The female builds a nest of plant material near the water . There it lays up to 50 eggs , which are hatched by the warmth of the rotting plants. It depends on the breeding temperature which sex the young animals will have. The female protects her clutch until the young hatch, which she digs up and carries to the water in her mouth. The yellow-striped young initially feed on their yolk sac and stay around their mother for about five months before they begin an independent life. This also protects them from their numerous enemies such as raccoons , herons and their own conspecifics.

There isn't much evidence of aboriginal handling of the alligators. Only an etching by Theodore de Bryce Le Moin from 1565 shows Indians from today's Florida hunting alligators with long spears. It was only in the last few centuries that crocodiles were hunted intensely for their skins and meat. The first mentions of the use of crocodile skins come from the end of the 18th century. Commercial hunting began with the Civil War from 1861 to 1865. The demand for products made from crocodile leather, especially shoes, belts and bags, increased significantly during this time. Catching young alligators and selling them - live or groomed - was also very lucrative. Around 1900, Mississippi alligator populations collapsed due to heavy hunting, and crocodile hunting shifted to Central and South America . According to the IUCN , the species is now considered harmless again. According to the BNatSchG, the Mississippi alligator has been specially protected since August 31, 1980. The import of live or dead animals into the EU requires a permit, as does the import of goods made from parts of the Mississippi alligator.

Keeping alligators as terrarium animals is comparatively difficult due to the size and unpredictability of the animals. In zoos Mississippi alligators, however, are quite common to find.

Alligators can be dangerous for humans when they are near rivers or when they move on the river in small motor boats, as the noise of the engines can increase the aggressiveness. CrocBITE, Charles Darwin University 's global database of crocodile attacks, has recorded 243 attacks by Mississippi alligators on humans since 1969 (as of July 2019), 37 of which were fatal for the victim.

Alligators and caimans can handle the cold much better than real crocodiles . The Mississippi alligator can even survive sub-zero temperatures for a short time without digging itself in. He lies in shallow water and only keeps the tip of his snout out of the water. When the water then freezes over, this breathing hole remains open.

Mississippi alligators, like other representatives of the Crocodylia, have a well-developed communication system, as a large number of different sounds are available to them. The mating call ("bellow") of the Mississippi alligator can reach a volume of 91–94  decibels on land and 121–125 decibels under water, with the formants of the call providing clues about the size of the animal.

In 1984, references to a magnetic sense were published for the Mississippi alligator .