The black caiman reaches a maximum body length of up to six meters and a weight of up to 300 kg. Like the Orinoco crocodile, it is one of the greatest predators in South America . Large and therefore old specimens of the black caiman have become rare. The black caiman resembles the Mississippi alligator in shape , although it is less closely related to it than to the other caimans. This is particularly evident in the wide snout. The animals are dark in color and have a lighter head. This is gray in young animals and changes its color to a brown tone in the course of life. Throughout life, the body has a drawing made up of bright dotted lines that fade with age, but do not completely disappear as in other crocodiles. 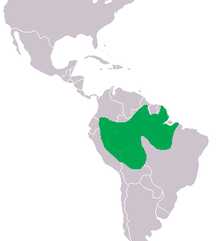 In tropical South America, flowing or standing waters such as rivers, lakes, oxbow lakes and seasonally flooded savannah and forest areas are populated by the black caimans. During the flood period, between May and July, they are spread over large areas. In the dry season, from September to December, the black caimans withdraw into permanent rivers and lakes due to the sinking water levels.

This caiman is very rarely found today, especially in open areas, as it was hunted extensively. However, the hunt was only profitable for the large males, who were hunted because of their particularly beautiful skins, which, unlike other crocodiles, do not contain any small bones. The much smaller females, however, retreat to remote lake areas to lay their eggs. They were hardly followed there. This allowed the stocks to recover again and again. The young animals can therefore also be found on the floodplains that form a connection between the lakes and the river.

Black caimans build hill nests from soil and plant material that are similar to those of the crocodile caimans ( Caiman crocodylus ), but are much larger. Nothing is known about the reproductive age or the size of reproductive animals.

Little is known about the diet of the animals either. The young probably feed mainly on insects and snails , but from a relatively small size they also hunt fish , birds and lizards . Adult caimans also feed on mammals and other caiman species. Like most other crocodiles, the black caiman is primarily nocturnal, but it is mostly optically oriented when hunting. This is probably due to the fact that it often hunts capybaras that swim in the water on the surface of the water. He doesn't have to dive into them. This is also the undoing of some anacondas , which have eaten large prey and are therefore easily recognizable on the surface of the water. Although possible due to its size, attacks on humans or larger pets are rarely documented. 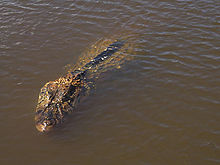