The nun Roth (lat. Monasterium Novalis Sanctae Mariae ) is a former abbey of Cistercian nuns in the town district of Burkardroth . Only the central nave of the monastery church " St. Blasius " is preserved. The church belonged to the diocese of Würzburg . It belongs to the Burkardrother architectural monuments and is registered under the number D-6-72-117-10 in the Bavarian Monument List .

The relic of the monastery stands in a rural area, surrounded by the partially wooded mountain ranges on the eastern edge of the Bavarian Rhön .

The monastery , consecrated to Maria and All Saints , was founded in 1231 by the minstrel and crusader Count Otto II and his wife Beatrix von Courtenay , who after returning from the crusade had sold their property at Botenlauben Castle near Bad Kissingen to the Bishop of Würzburg in order to get out of the to withdraw from the earthly world.

The veil legend reports that the monastery was founded when Beatrix was walking with her husband on messenger arbors and the wind blew her veil away, whereupon Beatrix vowed to build a monastery at the place where the veil was found.

Shortly before his death, Otto von Botenlauben also bequeathed the small Burkardrode castle to the monastery, a few meters to the south-west and probably razed by him on behalf of the Pope after 1234 .

After the death of the founding couple, who are buried in the monastery church, their son, who was also called Otto, became the monastery provisional. It increased its holdings through a series of barter deals and acquisitions.

After the death of the last abbess Amalia von Rumrod , the monastery dissolved in 1574; the property fell to the prince-bishop's chamber in Würzburg . During the Thirty Years' War the complex was looted and then demolished down to the nave of the church under the Würzburg bishops Johann Philipp von Schönborn (in 1650) and Johann Gottfried von Guttenberg (in 1686) . In 1691 the goods were sold to eight farmers from Burkardroth, creating the village of Frauenroth .

After the secularization in 1803, the monastery church was used as a simple village church. The history of the monastery and the art treasures connected with it went unnoticed for a long time; only a restoration of the church interior in the 1970s brought it back to the consciousness of interested parties. 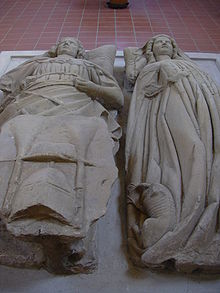 The building is a Romanesque Cistercian hall church with round arched blind arcades , lancet windows , typical roof turrets and a round apse . Only on the north side is it still possible to see that it used to be a three-aisled basilica with side aisles and a transept .

The church interior is flat, the Gothic choir vaulted with ribs. The colored profile of the triumphal arch, the vault ribs and window reveals - alternating gray and burgundy - has been heavily restored. In the choir, Gothic frescoes with passion scenes were partially exposed during the renovation from 1970 to 1972 ; The crucifixion and resurrection are clearly identifiable, the rest of the state of preservation is rudimentary.

In terms of art history, the most important piece of equipment is probably the high grave of the donor couple in the third quarter of the 13th century . The very expressive early Gothic sculptures by an unknown hand are among the most high-quality grave sculptures in the region and have been stylistically related to Katharina and Mauritius in Magdeburg Cathedral , the donor figures of the Naumburg master and works in Strasbourg. Art historian Georg Dehio considers the figures in the grave relief to be “unmatched in the poetic idealization of courtly nobility” despite the reshaping of the heads typical of the Baroque era.

The rest of the sparse baroque furnishings of the church (high altar, a Pietà and an Andreas ) do not come from the original monastery provenance .

The high altar with cartilage can be used on both sides. According to the inscription on the predella (back), Maximilian Adam von Blumencron , the founder of the noble family of the same name, had the ruined church restored for worship as monastery administrator and donated the altar in 1652. He is shown there kneeling at the feet of a cross with his first two wives and 11 children. The inscription reads:

" In honor of the Most Holy Trinity and Mother of God Maria, also the eternal memory of his two dear wives Eva Maria Ludwigin a real Franconian, buried here, then Maria Dorothea Ludwigin, a real Moser as well as children born from both marriage, has the honorable and distinguished one Mr. Maximilian Adam Ludwig von Würtzburg Chur - also Hochfürtslicher Würtzburgischer for 24 years at the court of the servant and the monastery Frauenroth administrator of these churches, so completely burned down and perished also no church service can be held next to this altar, done the 1. Octrobris Anno 1652 " "

- Inscription from the back of the high altar

Two other art treasures from the time of the church as a Cistercian monastery are no longer on site:

The church had three bells until 1942, after which two bells had to be delivered. One of them did not return. Until 1972 the church only had two bells. Since then, a three-part minor bell has been heard with b ', d' 'and f sharp' '. 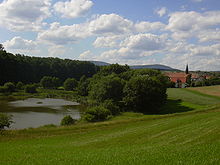 The areas once used for agriculture by the monastery have been taken by the village of Frauenroth; Fruit trees, horse paddocks, extensive grain fields and a village pond in the middle of and around the structure of the village still allow an idea of ​​the original design.

A lookout point at a crucifix above the village provides an overview.