Johann Philipp von Schönborn (born August 6, 1605 at Eschbach Castle (today Laubuseschbach ) in the eastern Hintertaunus ; †  February 12, 1673 in Würzburg ) was Elector and Archbishop of Mainz (from 1647), Prince-Bishop of Würzburg (from 1642) and Bishop of Worms (from 1663). Johann Philipp I von Schönborn is one of the most important archbishops of the Archdiocese of Mainz.

Born in the castle of Laubuseschbach , Johann Philipp came from the noble family of those von Schönborn , who have been on the Lahn since the 13th century . His father was the Electorate of Mainz, Georg von Schönborn, his mother was Barbara von der Leyen . His nephew Lothar Franz von Schönborn built the Weißenstein Castle near Pommersfelden ( Bamberg district ) from 1711 to 1718 . Several members of the Schönborn noble family converted to Protestantism in the 16th century . Johann Philipp was probably also baptized Protestant, but his mother raised him in the Catholic faith.

Johann Philipp von Schönborn also received legal training in Weilburg , Mainz ( Jesuit College ), Orléans and Siena and prepared early for a spiritual career. In 1621 he became Domicellar in Würzburg , in 1625 in Mainz. On May 12, 1626, he received minor orders in Mainz . In 1629 he became a member of the Würzburg cathedral chapter , in 1631 he fled from the invading Swedes to Cologne , where at that time almost the entire Catholic and spiritual elite of the empire was staying. He was particularly influenced there by the Jesuit priest Friedrich Spee von Langenfeld , who was a staunch opponent of the witch hunt, which was rampant in the 17th century .

On September 8, 1642, the imperial cavalry officer Johann Philipp was appointed Prince-Bishop of Würzburg. Equipped in this way, he took part in the peace negotiations in the Thirty Years' War ( Peace of Westphalia ) and recommended himself for higher positions. On September 8, 1645 he was consecrated bishop by the Mainz auxiliary bishop Wolther Heinrich von Strevesdorff .

Immediately after taking office, Johann Philipp negotiated reliefs for the diocese , which was marked by the Thirty Years War, and the associated spiritual territory. So he obtained lower war burdens on the imperial troops , bought security from the Swedish troops and caused the advancing French to withdraw again. In addition, realizing that the war was no longer viable, he began to sound out the situation for peace negotiations.

Since his own position was weak, he looked for allies for his policy. So he had the French First Minister, Cardinal Jules Mazarin, pretend to see the chances of a separate peace. He also wanted to enforce the right to vote for the imperial estates at the Westphalian Peace Congress and sent delegations there. With this he won the attention of the imperial court in Vienna and the French. The court recognized the danger of a split between the imperial estates and the crown, which Johann Philipp would have to deal with if necessary, and gave in to the question of the occupation of the Congress.

Since the religious questions could not be excluded from the negotiations for peace because of the resistance of the Swedes, Johann Philipp was the first Catholic imperial prince to compromise on this issue, which earned him the suspicion of the Pope and his representative, Nuncio Fabio Chigi .

Johann Philipp von Schönborn, who was experienced as an officer in the war, had begun the expansion of the Würzburg fortifications of the castle and city, which lasted until 1786 . 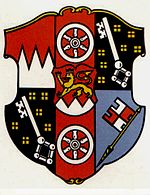 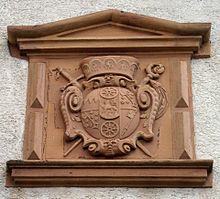 Coat of arms of Elector Johann Philipp von Schönborn at the seat of the Electoral Mainz office in Mainz-Ebersheim, around 1650

Kurmainzer boundary stone from the border area of ​​the Mainzischen Bachgau to the condominium Umstadt , today in front of the Palatinate Castle

Not least because of his outstanding role at the peace congresses in Münster and Osnabrück , he was elected Archbishop of the Metropolitan Chapter of the Archdiocese of Mainz on November 19, 1647 . The French city commander Charles-Christophe de Mazancourt symbolically sent Schönborn the keys to the city, but the latter rejected them “  avec beaucoups de modestie et de prudence  ” (German: “with great modesty and caution”). The pallium was withheld from him by the Pope until September 13, 1649, formally because the newly elected could not pay the fee due for this award, but also because of the willingness to compromise with the Protestant imperial estates described above.

The position of Archbishop of Mainz, with which the electoral dignity and sovereignty over the electoral state as well as the dignity of the Imperial Arch Chancellor and the ownership of the Imperial Directorate were connected, put Schönborn in a position to play a decisive role in shaping imperial politics. He actually exercised all of his offices and did not stop at mere titles. As Archbishop of Mainz, he remained Bishop of Würzburg. In 1663 he also became Bishop of Worms .

Politics after the Thirty Years War

The preservation of the laboriously negotiated Treaty of Westphalia, in which he played a key role, became the most important pillar in Johann Philip's politics. To this end, he negotiated a broad alliance system, always driven by the fear that the wars might flare up again. In doing so, he had to mediate between the empire and France and use the full authority of his offices, with rather weak formal and political powers. After all, there were still French troops on the territory of the Reich, which, among other things, held Mainz, the archbishop's seat of residence.

Johann Philipp von Schönborn, depiction in a coronation diary from 1658

The elector's policy was therefore initially oriented towards the emperor. But the Habsburg politics was not very empire and so from 1655 he approached France. In 1658 he delayed the election of Leopold I as emperor after Louis XIV , the Sun King, had also reached for the crown. In the end, however, Johann Philipp voted for Leopold in the Kurkollegium. In the same year, on August 15, he propagated the newly created Rhenish Confederation , which formed an imperial and French counterweight to the imperial court.

But the hegemonic policy of the Sun King, which endangered the imperial peace he was defending at all costs, caused the Elector to return to the emperor's side after 1661. After all, the imperial peace guaranteed the constitution of 1648, thereby regulating the religious affiliations within the empire and thus ensuring the continued existence of the spiritual principalities and thus a secure basis for the Catholic Church in the empire. By backdating the affiliation to January 1, 1624, the Archbishopric Mainz also got its possessions in Hessian and the Erfurt , which had previously belonged for centuries, back again. Johann Philipp therefore had every reason to keep this imperial peace.

After the Thirty Years' War, the Archbishop and Elector also set about reviving the Archbishopric, which had not come to rest in principle since the Schmalkaldic War of 1546. He was primarily concerned with economic staple rights and financial, cultural, religious and ecclesiastical reconstruction. The improvement of the infrastructure and the repopulation of areas desolated by war and plague began under his era. In terms of the church, he ensured the implementation of the resolutions of the Council of Trent and ordered the reintroduction of choral prayer in the Mainz Cathedral . In 1656 he decreed the introduction of Gregorian chant . He also promoted the publication of newly edited Bible translations, the new Biblical Catechism and the Mainz Proprium as an addition to the Tridentine-Roman breviary , for which his confidante, Auxiliary Bishop Adolph Gottfried Volusius, was recognizable. The Mainz Proprium also provided for the Archbishop of Mainz Willigis as a saint, which the Curia in Rome disputed, but ultimately regarded as legitimate. According to the decisions of the council, special liturgical forms could be retained if they had existed for more than 200 years. The new rituals published on the basis of the Council resolutions in Mainz in 1671 remained valid until 1950.

Johann Philipp von Schönborn, strongly influenced by Friedrich von Spee, was one of the first imperial princes to have the holding of witch trials on their territory prohibited.

Since he was also Bishop of Würzburg and Worms, Johann Philipp used this unique opportunity to resolve old discrepancies on a secular (borders) and spiritual (pastor appointments) level between the monasteries.

The archbishop promoted the emerging baroque piety and the associated procession, prayer and Eucharistic being. The prayer associations were supposed to help the residents through times of need such as the plague epidemic of 1666. Together with his great cousin Johann von Heppenheim called vom Saal († 1672) he had the seminary rebuilt in 1660 and the orphanage in Hof zum Homberg in 1665 .

In 1662 Johann Philipp von Schönborn founded the Martinus Library . It has been the diocese's scientific library for 350 years and, after the Mainz City Library, as the municipal successor to the Old University Library, which was founded in 1477, it is the oldest library in Mainz.

Relationship to Protestantism and Judaism

Archbishop Schönborn proved to be extraordinarily tolerant of Protestantism throughout his tenure. Protestant scholars, such as the young Gottfried Wilhelm Leibniz , often stayed at his court . Schönborn himself took part in Protestant baptism celebrations and tolerated Protestant church services on his territory.

The archbishop was driven by the idea of ​​bringing the denominations closer together again. According to Johann Philipp von Schönborn, a reunification of the Christian denominations was still achievable. Specifically, he considered z. B. To allow lay chalice and priestly marriage to lead Protestants back to Catholicism. He took special care of converts .

In 1642 the archbishop ordered the final expulsion of the Jews in Würzburg . This regulation was in effect until 1803.

During the time of Johann Philipp von Schönborn, the city of Mainz was expanded into a fortress. After Mainz with the citadel and forts (Kastel) in front of it always had a fortress-like character, the elector had the city expanded into a coherent fortress . In a further construction phase from 1655–75, the western city fortifications were built with six bastions (Johannes, Philipp, Martin, Bonifatius, Alexander and Paulus) and another 10 bastions that formed a star-shaped belt around Mainz; see engraving by Cöntgen . The new Gautor was built between the Philipp and Martin bastions in 1670. In addition, a citizens' militia was established under the command of the city fortress. Work on the fortress dragged on well into the 18th century and cost the city a fortune. In addition to the construction of the fortress, there were also many baroque buildings in Mainz (residence of the fortress commanders, noble houses). In Erfurt, Johann Philipp had the Petersberg citadel rebuilt from 1665 and the old city fortress Citadel Cyriaksburg modernized.

A kidney disease had prompted the archbishop early on to consider appointing a coadjutor with the right of succession. On December 15, 1670, the Prince-Bishop of Speyer , Lothar Friedrich von Metternich-Burscheid was appointed for this purpose. In Worms , the canon Philip von Wrede zu Amecke († 1677) was his administrator .

On February 12, 1673, Johann Philipp von Schönborn, famous as the German Solomon , father of the fatherland and Prince of Peace, died in Würzburg . He was buried in Würzburg, but his heart was transferred to Mainz, where it was buried in the west choir of the Mainz Cathedral . His grave monument there calls him a truly great one.

In the Walhalla memorial there is a bust made by Christian Friedrich Tieck in 1818 .