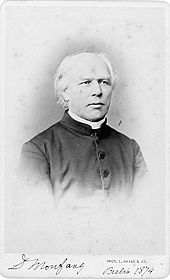 Christoph Moufang on a photograph by L. Haase & Co., Berlin around 1874

Christoph Moufang is the son of Wilhelm Moufang (1779–1845), a businessman in Mainz and his wife Katharina Wilhelmine, a daughter of the businessman Nikolaus Lennig. Christoph Moufang's better-known family members include his uncle Friedrich Lennig and Adam Franz Lennig , his nephew , the religious historian and Indologist Edmund Georg Nicolaus Hardy and his niece Katharina Wilhelmine Moufang, who was married to the Reichstag member Nicola Racke , his nephew the Heidelberg lawyer Wilhelm Moufang's father of his great-nephews Nicola Moufang , Eugen Moufang , Franz Moufang , Wilhelm Moufang and the grandchildren of his great-nephew Franz Moufang, Alexis Grammatidis, doctor of dentistry and orthodontist , the composer and sound artist David Moufang , Gabriel Grammatidis, business graduate, system developer and international speaker .

Christoph Moufang studied medicine and theology in Mainz , Bonn , Munich and Gießen and was ordained a priest in Mainz on December 19, 1839 . After several posts in the diocese of Mainz, he was appointed in 1851 by Bishop Wilhelm Emmanuel von Ketteler to reign the newly founded Mainz seminary .

Donation by will to the seminary

In these years one of the most important donations fell through inheritance to the diocese of Mainz. By will, Johann Friedrich Heinrich Schlosser , also known as Fritz, bequeathed his 35,000-volume library to the Mainz seminary . During the term of Christoph Moufang's appointment to rain the seminary, the important, now considerably expanded, library of the seminary was in Moufang's care.

Diocese administrator during the vacancy

After the death of Bishop von Kettelers, Moufang was elected bishop by the cathedral chapter on July 13, 1877 ; but the election was not confirmed by the grand ducal Hessian government and he was therefore not consecrated bishop. For this reason, he led the diocese as the vicar of the capitulars through the vacancy during the period of the Kulturkampf up to the consecration of Bishop Haffner in 1886, and then initially resumed his role as the reign of the seminary.

Like his uncle Adam Franz Lennig, Moufang was one of the initiators of the German Catholic Days . The first Catholic Day took place in Mainz in 1848. In 1868, Moufang was founded by Pope Pius IX. Appointed to the commission for the preparation of the First Vatican Council (1869–1870).

In addition to the church office, constant commitment to politics and social issues

In addition to his church office, Moufang, like many other church princes of his time, like his predecessor, took an active part in political events. Moufang founded the Center Party of Hesse in 1862 . He represented Bishop Wilhelm Emmanuel von Ketteler from 1862 to 1877 in the first chamber of the state estates of the Grand Duchy of Hesse and from 1871 to 1890 belonged to the central faction in the German Reichstag . During this time he represented the constituency of Koblenz 5 (Mayen - Ahrweiler) from 1871 to 1873 , of the Grand Duchy of Hesse 9 (Mainz) from 1874 to 1881 and of Cologne 6 (Mülheim am Rhein - Wipperfürth - Gummersbach) from 1881 to 1890. . Moufang addressed the " social question " at an early stage and put forward considerations on it that were later reflected in the theories of the social market economy .

Christoph Moufang was buried in the main cemetery in Mainz .