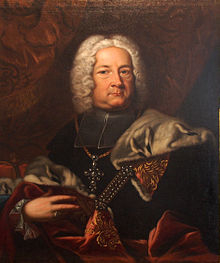 From 1681, like his brother, he attended the Jesuit grammar school in Aschaffenburg , in 1701 he received the minor orders and in 1704 he was accepted into the Würzburg cathedral chapter, and one year later also the Bamberg. After studying in Würzburg, at the Jesuit novice in Mainz and in Rome , his uncle Lothar Franz put him on diplomatic missions in Poland , Sweden , Prussia and Saxony . He came to Vienna as the ambassador of the Electorate of Mainz.

His uncle, who as Elector of Mainz also archchancellor was intended him to Vienna as his deputy in that office, as Reich Vice Chancellor to use, but Emperor Leopold I refused his consent. It was only after he died in 1705 that his son Josef I , who had to secure the vote of the Elector of Mainz in order to be elected emperor , gave his consent to Friedrich Karl's appointment as successor to Dominik Andreas I von Kaunitz . In 1706 he also became the Imperial Privy Councilor when his uncle Lothar Franz made his Dragoon Regiment available to the Kaiser to fight rebellions in Hungary.

From 1705 to 1731 he led as Imperial Vice Chancellor in Vienna for the Emperors Joseph I and Charles VI. the Reichshof Chancellery , the supreme authority of the Holy Roman Empire . For many years he lived in an apartment in the Imperial Chancellery Wing of the Vienna Hofburg , which was newly built at his instigation from 1723–1730 , but settled in 1706 in the Viennese suburb as his own residence and to accommodate his extensive library and his important art collection (including The Blinding of Simsons by Rembrandt) build the Palais Schönborn . Between 1710 and 1720, he also had the Blauer Hof in Laxenburg redesigned.

A common fondness for architecture , books and gardens made him friendly with Prince Eugene of Savoy in Vienna . He advised the prince from 1707–1715 on the construction and design of the Belvedere in Vienna. Through Prince Eugene, he met his architect Johann Lucas von Hildebrandt , whom he subsequently included in his own building interests, and in 1718 also Abbot Gottfried Bessel of the Göttweig Monastery , whom he won in 1724 for the first drafts of the Imperial Chancellery wing of the Vienna Hofburg.

In 1710 he acquired the Lower Austrian rulership of Göllersdorf from the last Count of Puchheim, the bishop of Wiener Neustadt, with his father, who lived in Franconia, being enfeoffed, who joined the Puchheimer through adoption. From 1712 to 1717 he had the new Schönborn Palace built on the property there. In 1715 he also acquired the Weyerburg rule and in 1740 the Schönborn-Batthyány Palace in Vienna's Renngasse as an inner-city residence. Schönborn Castle, Weyerburg Castle and the Palais still belong to the Austrian line of the Schönborn family .

Even after Friedrich Carl Graf Schönborn was elected Bishop of Würzburg, he stayed in Vienna for years, where he had put down roots in his function. Balthasar Neumann , the architect of the prince-bishop's residence, which was in the process of being built, had to come to Vienna several times in order to revise the Würzburg plans with Hildebrandt and to complete them congenially. With Hildebrandt († 1745) Schönborn remained in close, one can say friendly, relationship throughout his life. "There is no one who knows me better," wrote Hildebrandt in 1742 about his client. Even in his Viennese years, Hildebrandt carried out several commissions for the Imperial Vice Chancellor, the Schönborn Garden Palace in the Vienna suburb, the renovation and expansion of the Blue Court in Laxenburg, the Schönborn Palace near Göllersdorf and the church in Göllersdorf, the conversion of the Schönborn Palace. Batthyány in the Inner City of Vienna and the Secret Court and State Chancellery . In 1904, Schönborngasse in Vienna- Josefstadt (8th district) was named after Friedrich Karl.

In 1727 Friedrich Karl inherited from his uncle, the Elector of Mainz and Archbishop Lothar Franz , his Hungarian possessions: Emperor Karl VI. had crowned his Imperial Chancellor, who elected him in 1711, and had sent him two regiments to suppress the uprising of Francis II Rákóczi , in 1726 he had confiscated Rákóczi's property, Palanok Castle with the area around Mukachevo and Tschynadijowo in the Kingdom of Hungary , one of the largest Possessions in Eastern Europe, which consisted of four cities and 200 villages with a total area of ​​2400 square kilometers; it remained in the possession of the Schönborn family until the 20th century. He also inherited the Franconian Weißenstein Castle from Lothar Franz , whose park he completed and which is still owned by the Counts of Schönborn-Wiesentheid.

Prince-Bishop of Bamberg and Würzburg 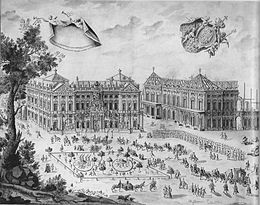 Prince-Bishop Friedrich Karl moved in in front of the residence under construction in Würzburg in 1731.

As Reich Vice Chancellor, Friedrich Karl von Schönborn was able to successfully negotiate between the Emperor and Pope Clemens XI in the War of the Spanish Succession . convey. As the redeveloper of the imperial court chancellery, he secured the trust of the Habsburgs , which, however, later became a hindrance to the election of the Mainz cathedral chapter when he was hoping to succeed his uncle as elector-archbishop of Mainz (with the secondary function of imperial chancellor ). Already when he succeeded his brother Johann Philipp Franz in Würzburg, who suddenly died in 1724, he had to stand behind because he had made himself very unpopular in his principality and with his cathedral chapter. However, after his uncle Lothar Franz's death in Bamberg in 1729, he was able to succeed his uncle as Prince-Bishop, especially since he had been coadjutor with the right of succession since 1710 and the Pope gave him a vote of eligibility for all in December 1728 to overcome the obstacle to the accumulation of dioceses German dioceses. Half a year later he was finally given the Würzburg chair. From 1710 to 1729 he was titular bishop of Arcadiopolis in Asia . In 1732, however, he failed in his election as elector-archbishop of Mainz.

His reign was economically and artistically a heyday of both Franconian monasteries. He was the builder or renovator of around a hundred church buildings, builder of the summer residence Schloss Werneck , the new monastery church of the Münsterschwarzach Abbey and, after 24 years (1720 to 1744) construction, he completed the shell of the Würzburg residence . Schönborn's desire to build was unprecedented and a measure to promote the economy. Together with his brother, Johann Philipp Franz, he gave the name of the primarily art-historical term Schönbornzeit for the era of Würzburg and Franconian history that began when his brother took office in 1719 and ended with his own death in 1746. Friedrich Karl's reforms in the judiciary and administration were shaped by an early Enlightenment spirit . The education system and the university , especially natural sciences and medicine, were massively promoted by Friedrich Karl.

Schönborn Chapel, the burial place of the Schönborns at the Würzburg Cathedral

Friedrich Karl died after a short illness, the penultimate of his brothers. According to his last will, his body was in the 1721 begun under him from 1731 to 1736 as a mausoleum ( burial place ) for the Schönborns completed Schönborn chapel of the Würzburg cathedral , his heart in the court chapel of the Bamberg residence , entrails, eyes and tongue in the Loreto chapel in Göllersdorf buried separately in Lower Austria . With him the series of important princes from the von Schönborn family ended.

The Margravine Wilhelmine von Brandenburg-Bayreuth reports in her memoir about the events on the occasion of a visit to Friedrich Karl von Schönborn-Buchheim in Schloss Weißenstein (Pommersfelden) in November 1735. She characterizes the Prince-Bishop as follows:

“I have a few things to say about him here. It is well known that the Schönborn family is one of the first and most respected in Germany; it provided the empire with several princes and bishops. The one we are talking about was brought up in Vienna. His great abilities helped him to the post of Reich Chancellor, an office which he administered for a long time. When the dioceses of Würzburg and Bamberg became free due to the death of their bishops, the court of Vienna took this opportunity to reward Schönborn for the services rendered and was able to exercise such an influence on the election that he became the administrator and bishop of these two dioceses was called. It can rightly apply to a great genius and a great politician. His character also corresponds to this last quality; for he is fake, insidious and cunning; his nature is arrogant, his spirit unattractive because he is too pedantic; nevertheless, when you get to know him better, you get in touch and especially when you try to learn from him. I was so happy to win his favor. We often had dialogues that dragged on for four to five hours. I never got bored with it; he introduced me to many things about which I knew nothing. It could be said that he had a universal mind. There was nothing we didn't talk about together. " 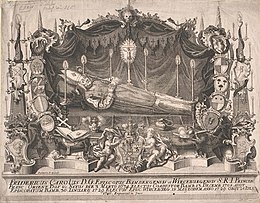