The family of softshell turtles (Trionychidae) is characterized by a soft, leather-like shell. The sides and rear of the back armor are flexible. The neck is extremely long, the elongated head ends in a trunk. The toes of the row-like, flattened legs each have three free claws and are connected to one another by webbed feet. They occur in inland lakes in Africa, South and East Asia and North America.

Softshell turtles are very agile and quite snappy, as their long neck allows them to snap backwards over their back armor. Their diet consists mainly of animal food, occasionally they also consume vegetable matter. All species lay round, calcareous eggs. They live in fresh water , sometimes in brackish water or even in sea ​​water . The Trionychidae appeared in the Upper Jurassic together with the sea ​​turtles . It was an early group of the Halsberger tortoise , whose success can be measured by the fact that 13 genera and around 32 species still exist in the inland waters of North America, Africa and Asia.

The lack of the keratin layer of the shell (compare turtles ) should not lead to the assumption that we are dealing with phylogenetically older turtle species. During their development, these species lost the keratin layer again. 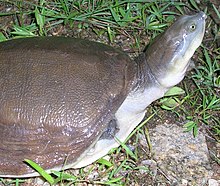 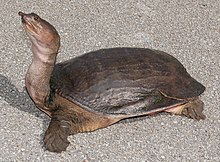 Some softshell turtles are extremely rare and on the verge of extinction. Of Cantor's giant softshell turtle ( Pelochelys cantorii ), only three fully grown and twelve newly hatched juveniles were found on the Mekong in Cambodia in 2007 . Of the Yangtze giant soft turtle ( Rafetus swinhoei ), only two specimens in zoos in China and one in Hoan Kiem Lake in Hanoi were known until a fourth animal was found in Vietnam . The last known female of this species died on April 13, 2019.