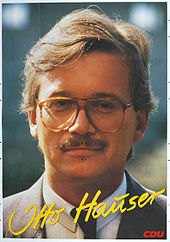 From 1983 to 1998 he was a member of the Bundestag and for a few months in 1998 he was Parliamentary State Secretary to the Chancellor and Spokesman for the Federal Government .

After school, Hauser did an apprenticeship as a banker and then completed a postgraduate course in business administration . He did his military service from August 1975 to November 1976 in the paratrooper battalion 251 . He then worked as a trainee at the Esslinger Zeitung and later became a political editor for the daily newspaper Die Welt .

From 2001 to 2005 Otto Hauser was the general representative of M.Tech Technologie und Beteiligungs AG. At the same time, he presented his own program called "Successful Makers" on the regional television broadcaster B.TV.

Since 2001, Otto Hauser runs his own business consulting and advisory in the various mandates economy operates. He is also the managing director of a research and development institute.

Hauser is divorced and has two children.

Hauser was chairman of the Federal Committee for Security Policy of the CDU in Germany.

Otto Hauser has always entered the Bundestag as a directly elected member of the Esslingen constituency . In the 1998 Bundestag elections, he lost 40.2% to 45.9% of the first votes to the SPD candidate Siegmar Mosdorf .

On 26 May 1998 Hauser was used as Parliamentary Secretary at the Federal and government spokesman in by Chancellor Helmut Kohl led government appointed. After losing the general election, his term of office ended on October 27, 1998.

On June 26, 2006, Hauser was elected chairman of the German-Azerbaijani Forum in Berlin.

In April 2010 he was appointed Honorary Consul of the Republic of Azerbaijan .

Hauser is honorary chairman of the Esslingen / Göppingen section of the German Economic Council .

Four months before the 1998 federal election , Hauser made headlines nationwide as a government spokesman. Hauser called - similar to the former CSU general secretary Bernd Protzner  - the Magdeburg model (after the state election in 1998 an SPD -guided minority government using the PDS ) as "about the same as when the Nazis after the war had helps rule under a different name". This was commonly perceived as equating the PDS and the NSDAP . Ignatz Bubis , chairman of the Central Council of Jews , called Hauser's statements a falsification of history . Manfred Stolpe , Prime Minister of the State of Brandenburg , also condemned Hauser's testimony; Hauser belittles "the Nazi crimes unbearable". A short time later, in an interview with the Chemnitz daily Freie Presse , Hauser warned East Germans not to endanger the solidarity of West Germans with their voting behavior. This was generally seen as a threat to cut the transfer payments to the new federal states if the PDS continued to gain a high share of the vote and remained involved in state governments. Hauser put his statements directly into perspective in the ZDF broadcast in Bonn ; he was misunderstood. On the one hand, he had "not compared the SED / PDS with the Nazis," on the other hand, it was far from him to want to patronize the East Germans in their voting behavior. In the future he will "adhere to the rules at the federal press conference" and "concentrate on the presentation of government policy". He was criticized from within the ranks of the Union parties and FDP as well as from the opposition and asked to resign. For the CDU / CSU parliamentary group chairman at the time, Wolfgang Schäuble , it was "also no excuse if Hauser refers to the fact that he did not speak as a government spokesman , but as a member of parliament." FDP board member Wolfgang Kubicki was one of the politicians who called for his resignation. Hauser u. a. by Federal Chancellor Helmut Kohl and CDU General Secretary Peter Hintze . In addition, the executive board of the federal press conference threatened in writing with consequences because of Hauser's appearance at the federal press conference. The correspondents present were "not prepared to be politically proselytized or misused for election campaign purposes". Der Spiegel assessed Hauser's work as a government spokesman as follows: “Never before has a government spokesman managed to embarrass himself like that right after the start. Kohl's supposed miracle weapon for the final months of the election campaign turns out to be a terrific miscast. "