The title of this article is ambiguous. Further meanings are listed under Wolfgang Lippert (disambiguation) .

Wolfgang Lippert (born February 16, 1952 in Berlin-Kaulsdorf ) is a German singer , presenter and entertainer . Also known under the stage name "Lippi", he was one of the most popular entertainers in the GDR . In the old federal states he was the presenter of the television programs Der Große Preis and Wetten, dass ..? After the reunification of Germany . known. 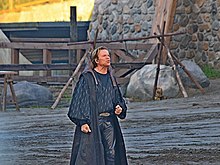 Wolfgang Lippert as ballad singer Abbelin at the Störtebeker Festival (2017)

The son of a band master first learned the trade of a car mechanic and then worked as a photographer , among other things . He began his stage career as an employee for organization and technology at the Gerd Michaelis Choir . From 1978 to 1980 he completed piano and vocal training at the Friedrichshain Music School in East Berlin . He went on tour with his own rock band and sang for record and radio productions. With this band he was also a guest on the children's program He - Du! . The director was enthusiastic about Lippert's dealings with the children and offered him to moderate the show. Lippert accepted the offer and was the moderator of the monthly program from 1983 to 1986.

In 1983 he landed with Erna comes - based on his grandmother of the same name, with whom he grew up - a hit in the GDR (composed by Arndt Bause , text: Wolfgang Brandenstein ). In 1985 a cover version of the song by Hugo Egon Balder appeared in western Germany. This was followed by other hits , including Tutti Paletti .

In 1984 Lippert got his first full-length entertainment program on GDR television with the title My First Show . This was followed by the evening show You have to be lucky (1988–1997). At Ein Kessel Buntes in 1988 he was one of the moderators who changed from show to show. On April 22, 1989, Lippert surprised everyone with an appearance on Frank Elstner's ZDF program, Nose Ahead , without having discussed this beforehand with those responsible for GDR television. However, Lippert was previously, with the approval of the GDR, as a presenter of an entertainment program on the NDR . During the fall of the Berlin Wall in 1989, he was voted TV Favorite of the Year and right ? at Radio Bremen , the first moderator of the GDR, their own show in the Western television moderated.

Since 2000 Lippert can be seen as a ballad singer and actor at the Störtebeker Festival in Ralswiek on Rügen . He also appeared in other theater productions, including the comedy Der Liebesfall (with Herbert Köfer ) in early 2006 . In 2001 he took part in the ZDF series Wilder Kaiser and was on the jury for the Miss Germany election.

In 2002, Lippert announced the district court Charlottenburg personal bankruptcy to. Investments in the traditional cinema "Union" in Friedrichshagen, bought by the Treuhand in 1994, and in condominiums had failed.

In 2002, Lippert developed the TV series Politibongo for the children's channel of ARD and ZDF on behalf of the German Bundestag . From 2006 to 2009 Lippert had the MDR Fernsehen TV show Where is Lippi? .

In 2008, after a long break as a singer, the new single Regine, co-composed by Andreas Martin, was released on Jack White's label Gloriella Music, followed by the corresponding album Das überleben wir . Lippert has been an ambassador for the German Children's Fund and UNICEF since 1989 .

Since 2014, Lippert has hosted the Saturday evening show Ein Kessel Buntes (seven episodes a year) on Mitteldeutscher Rundfunk . In November 2016 he took part in the dance show Deutschland tanzt ( ProSieben ).

In November 2018, Lippert took over the moderation of the show Back then it was on MDR television and succeeded Hartmut Schulze-Gerlach .

Lippert lives with his wife Gesine in Fürstenwalde near Berlin and in Ralswiek on Rügen .