The United Nations Transitional Administration in East Timor shortly UNTAET (of English. United Nations Transitional Administration in East Timor ) was of 25 October 1999 to 20 May 2002, a peace mission of the UN in the area of East Timor . Its purpose was to provide an interim government and to protect the East Timorese people who, after their referendum for independence on August 30, 1999, were exposed to violence by pro-Indonesian militias and parts of the Indonesian military . UN resolutions 1272 and 1392 formed the basis for the mission . 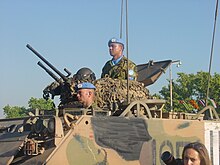 Transfer of control from INTERFET to UNTAET

The initiative for the UNTAET came from Australia , which also provided the majority of the troops. The other nations involved in peacekeeping and reconstruction were: Egypt , Argentina , Bangladesh , Benin , Bolivia , Bosnia and Herzegovina , Brazil , Chile , People's Republic of China , Denmark , Fiji , Gambia , Ghana , Great Britain , Ireland , Japan , Jordan , Canada , Kenya , Republic of Korea , Malaysia , Mozambique , Namibia , Nepal , New Zealand , Niger , Nigeria , Norway , Austria , Pakistan , Peru , Philippines , Portugal , Russia , Samoa , Senegal , Zimbabwe , Singapore , Slovakia , Slovenia , Sweden , Spain , Sri Lanka , Thailand , Turkey , Ukraine , Uruguay , Vanuatu , and the United States . To secure the country, it was divided into four sectors. Troops from South Korea, Thailand and the Philippines were in charge in the east, Portugal in the center, Australia and New Zealand in the west, and Jordan in the Oe-Cusse Ambeno exclave . The mission comprised 7,687 uniformed people, including 6,281 soldiers, 1,288 plainclothes police and 188 military observers. The cost of this was $ 476.8 million. 17 UNTAET members died in the operation.

UN medal for UNAMET and UNTAET

With the formal release of East Timor into independence in 2002 , the UNTAET mission under the direction of Sérgio Vieira de Mello came to an end. Most of the civic tasks have been entrusted to the newly elected government under President Xanana Gusmão , while the military and police are overseen by the successor mission UNMISET .

The UNTAET Crime Scene Detachment was a special investigation unit that was founded in November 1999 in East Timor under the UNTAET. It consisted of international police, Australian and New Zealand military police . The unit was tasked with the exhumation of several hundred East Timorese victims who were killed while under the UN mandate. While the international police force mainly worked in Liquiçá and the surrounding area, the military police were active all over East Timor. After the arrival of new international police forces, the unit was disbanded at the end of 2000 and merged with the Human Rights investigative unit in Dili .