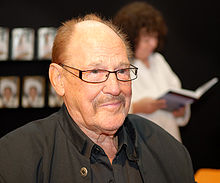 Herbert Köfer (born February 17, 1921 in Berlin ; † July 24, 2021 there ) was a German actor , voice actor and presenter . In a career spanning more than 80 years, he played in more than 300 film and television productions and took part in numerous theater productions. In addition, with his moderation of the first edition of the current camera on December 21, 1952, he was the first news anchor on German television.

Herbert Köfer was born as the only son of a postcard publisher couple in the Berlin district of Prenzlauer Berg . After attending the socialist community school in Berlin-Niederschönhausen and a private school , which he graduated with secondary school leaving certificate, he began a commercial apprenticeship at the Orenstein & Koppel locomotive factory in Berlin-Spandau in 1937 at the request of his parents , which he broke off after six months. Köfer decided to play and trained at the German Theater's drama school from 1937 to 1940 .

In the 1940/41 season Herbert Köfer got his first engagement at the city ​​theater in Brieg in Silesia and made his debut for a sick actor as Crown Prince Friedrich in Katte , a historical play by Hermann Burte about Hans Hermann von Katte , the childhood friend of Friedrich II . After his stage debut, Köfer was drafted into the German Wehrmacht in Potsdam during the Second World War and trained as a radio operator . After completing his training, he was transferred to the Eastern Front, where he was employed as a radio operator for a regimental commander. After being wounded, he was transported to a hospital in Düsseldorf . Following his recovery, he was taken prisoner by the United States and played in a theater group there.

After the end of the war in 1945 he resumed his professional acting activities. He received the offer to play at the Lübeck Theater , but turned it down in order to move back to his parents in Kleinmachnow . Until 1947 he was engaged at the New Berlin Art Theater, where he appeared in Johann Wolfgang von Goethe's drama Iphigenie and in Friedrich Schiller's stage adaptations as Don Cesar in The Bride of Messina or the Secretary Wurm in Kabale und Liebe . In the 1947/48 season, Köfer made a guest appearance at the Volksbühne Berlin . In 1949 he worked at the Kleine Bühne cabaret , the predecessor of the Distel cabaret theater in Berlin, where he performed between 1956 and 1959.

From 1950 to 1952 Köfer was engaged at the Deutsches Theater , here he was seen in the leading role in the comedy Der Zimmerherr by Gerhart Hermann Mostar , as Lewis in the drama Golden Boy by Clifford Odets (1950; director: Wolfgang Langhoff ), in William Shakespeare's Was ihr wollt (1951, directed by Wolfgang Heinz ) or in the play Pygmalion (1952) by George Bernard Shaw . In 1964 he became a member of the Kleinmachnower Kreis (a room theater in the Potsdam district) and worked there in sophisticated literary programs on, among others, Heinrich Heine , Theodor Fontane and Georg Weerth .

In 1990 Köfer was seen at the Berlin Hansa Theater alongside Brigitte Grothum and Eberhard Cohrs in the stage adaptation Rosen-Emil . He then worked at the Theater am Kurfürstendamm in, among others, Horst Pillaus ' Guten Tag, Herr Lover and Erich Kästner's Das Lebenslängliche Kind as well as in 1997 at the side of Winfried Glatzeder and Elisabeth Wiedemann in the staging of Pension Schöller , a play by Wilhelm Jacoby and Carl Laufs , where he took over the title role of the former music director Ludwig Schöller. In July 2017, the piece Pension Schöller was performed again on the occasion of the 20th anniversary with the former cast. From 2003 to 2018 he ran Köfers Komödiantenbühne , a private touring theater with many East German actors. In 1995 he was on stage with Ursula Staack in the “Schlossgarten” theater in Arnstadt for the comedy Die Bratpfannenstory as the house owner Friedrich Riemer. From 2008 to 2014 he was seen every year at the Jedermann Festival in the Berlin Cathedral in the role of the poor neighbor.

At the Comödie Dresden in 2010, on the occasion of his 70th stage anniversary under the direction of Dominik Paetzholdt , alongside Lutz Jahoda and Regina Jeske, he played the formerly great school director and castle owner Ludwig von Schwitters in the stage adaptation of Stefan Vögels Ritter Ludwig . From August 26, 2011 he was also at the Comödie Dresden in the theater version of the GDR early evening series Pensioners never have time to see, where he played the role of pensioner Paul Schmidt as he once did. Due to the success of the theater edition, Köfer continued the story of the pensioner Paul Schmidt on the high seas with Paul .

With the play Grandpa is the best Grandma (English title: Grandpa is a perfect Granny ) by the British Lydia Fox , Köfer celebrated his 75th stage anniversary at Comödie Dresden, where he played the dual role of au pair Georgina Wilberforth and grandpa George Hanley, who reports back to his family after years, embodied. The piece was performed in 2015/16.

From January 2017 he gave several guest performances in various cities with the black comedy by Curth Flatow A Blessed Age as a 90-year-old pensioner Georg Neumann, who is to be brought to his house, where he lived for 40 years, and inheritance.

From February 2018 he was on tour with a play for the GDR television program Das Blaue Fenster , which Köfer presented 99 times between 1982 and 1990.

Herbert Köfer stood in front of the camera on December 21, 1952 as the newscaster of the current camera for the first and almost 40 years later on December 31, 1991 for the last broadcast of the German television broadcast . This made him the first news anchor on all-German television. In the years that followed, Köfer helped to build up GDR television. Among other things, he moderated the television carousel until 1954 . From 1955 to 1965 he appeared as one of the three microphone players in the entertainment program Da laughs on the bear . The microphone players each represented a German region: Heinz Quermann alternating with Manfred Uhlig ( Saxony ) - Gustav Müller ( Rhineland ) and alternating Herbert Köfer ( East Berlin ) and Gerhard Wollner ( West Berlin ).

In the film Nackt unter Wölfen (1963), set at the time of National Socialism , Köfer also proved his talent for serious roles as an SS officer , as well as in Hans-Joachim Kasprzik's Wolf under Wölfen (1964) as the estate manager of Studmann. In the television production of the drama Rose Bernd , a play by Gerhart Hauptmann , he was seen in the same year at the side of Ursula Karusseit as the pious bookbinder August Keil and Rose's fiancé. In 1968 he took over the title role of the poor tailor Androclus in Kurt Jung-Alsen's Androclus and the Lion . However, he mainly played roles in the cheerful subject. Under the direction of Eberhard Schäfer , he played in several television swings in the 70s. In the television fun series Maxe Baumann he embodied Hugo Krüger, who in his first appearance in 1979 surprisingly pretended to be Max as Meta Mischke, the mother of Erna Mischke ( Helga Hahnemann ). In Hahnemann's “Breakfast” sketch, in which she slipped into her star role as Traudel Schulze, Köfer quickly took on the role of Hugo, which Rolf Herricht should originally have played. Herricht died, however, the day before the planned premiere.

Köfer worked repeatedly with the actress Helga Göring , often as a married couple. In the 20-part early evening series Pensioners Never Have Time (1979) he was by her side the pensioner Paul Schmidt. They played the Timm couple in the television series Tales of the Garden Fence (1982) and its sequel, Neues über Gartenzaun (1985). From 1984 to 1986 he embodied the mechanical engineer Hans Neumann at the side of Irma Münch in the family series Neumann family and the continuation of Neumann's stories . In 1985 he was manned by Hans-Joachim Hildebrandt at Police Call 110: A Step Too Far , where he, as Martin Veltin, reveals to his wife Luise, disturbed, that he had knocked over a woman after a concert and left her dead in the ditch next to Susanne Düllmann took over the leading role in the episode. In addition, he worked several times in the 1970s and 1980s in the television series Acting , in which he slipped into several roles at the same time per episode.

While still at the theater, he was employed in the radio , where he participated in radio plays , features and entertainment programs. GDR radio listeners remember him primarily in a leading role in the real-socialist radio play series Neumann, Ring Twice , which was broadcast weekly in 678 episodes on Radio DDR I from 1968 to 1981 .

On December 31, 1991, Köfer was a guest on the New Year's Eve broadcast, the DFF's last broadcast, and played the “Bottelmeier” sketch together with Frank Schöbel .

After the fall of the Wall , he took on several guest roles and larger episode roles in television programs, including in several episodes of the ZDF family series Elbflorenz (1994) or in the television crime series Wolffs Revier (2000), SOKO Wismar (2005), SOKO Leipzig (2006; 2014) and Ein strong team (episode Bloody Harvest ; 2007). In 2002, he took on the role of Grandpa Schönstein in the ZDF four -part television series Liebesau - The Other Home of Wolfgang Panzer .

From 2001 onwards he had repeated guest appearances in the ARD doctor series In all friendship . He made his first appearance under the direction of Peter Wekwerth on the occasion of his 80th birthday in February 2001 in the title role of episode 93 Anton's Secret , in which he played a retired groom and horse whisperer. In the episode Vergiss mein nicht , which was first broadcast in February 2016 , he played Fritz Wusthoff, who, after his wife Christel ( Ingeborg Krabbe ) had advanced cancer , wants to end her life with her. In April 2021 he was in the 925th episode Together you are less alone than 100-year-old comedian Leo Lachmann, whose great-great-granddaughter is expecting a child.

He was also in Bernd Böhlich's Up to the horizon, then left! (2012) seen on the big screen as a senior citizen's home resident Klaussner alongside Angelica Domröse and Otto Sander .

In September 2020, Köfer stood in front of the camera for the ARD series Polizeihauptmeister Krause . The film, titled Krause's Future , aired on Das Erste on February 5, 2021 in honor of his 100th birthday .

Herbert Köfer during the Alexanderplatz demonstration in 1989

Köfer has received several awards in the course of his acting career. In 1964 he received the Heinrich Greif Prize . 1969 he was for his performance as Paul Barbarino in the TV miniseries Krupp and Krause of the National Prize of the GDR awarded. In 1981 to 1986 (except 1985) Köfer was five times for television favorite of FF thereby selected. In 2002 he was awarded the Golden Hen for his life's work by his acting colleague Ursula Karusseit , which he received again in the same category in 2020.

He learned to play the violin professionally , which Köfer also showed on television for a sketch with Hans-Joachim Preil and in the 99th Police Call 110 episode One Step Too Far .

In March 1999 he published the music album Mit Herz & Schnauze with Günter Pfitzmann, which contains individual vocal interpretations as well as joint duets by Köfer and Pfitzmann.

In 2008 he recorded some pieces of music together with Frank Schöbel , which he published on an audio book. In February 2016, Schöbel and Burkhard Lasch , lyricists for the GDR rock band Puhdys , wrote him the song What would be if? On the occasion of his 95th birthday .

In the years 2019 and 2020 he held readings from the autobiography adding his deceased fellow actress Ursula Karusseit .

Köfer had three biological children and a foster daughter, Gabriele. The cameraman Andreas (* 1949) comes from his first marriage . His second marriage to actress Ute Boeden came from his two daughters Mirjam (* 1973) and Geertje (* 1985), who also took up acting; however, the second marriage was separated before the birth of his second daughter.

In 2000 he married his long-time partner Heike , who is also an actress and also a singer, in his third marriage . He lived in Kleinmachnow, in Zeuthen and from 2013 on Seddiner See in Brandenburg .