SOKO Wismar is a German crime series. It has been broadcast on ZDF since October 6, 2004 and runs on Wednesdays in the evening program. The series is the fifth offshoot of the SOKO 5113 series . The 17th season is now being broadcast.

In a small police station in the Hanseatic city of Wismar , major and minor offenses that happen in the immediate vicinity are researched and determined. The head of the investigative team is First Chief Inspector Jan Reuter, the head of the district. He is supported by Chief Detective Karoline Joost and Chief Detective Lars Pöhlmann, who usually investigate a case together. The team also includes police chief Kai Timmermann and Stine Bergendal, who is part of the team as a Danish exchange police officer. 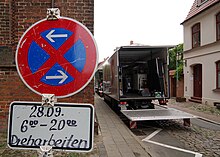 Shooting in Wismar in September 2009

Production vehicles for filming in the Nikolaikirche 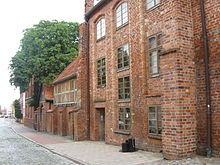 SOKO Wismar is made by the production company Cinecentrum Berlin, a subsidiary of Studio Hamburg . Half of the filming takes place in Wismar and the surrounding area and half in Berlin . The old town, which is part of the world cultural heritage, and the port facilities of Wismar often serve as a backdrop for outdoor shots . The courtyard entrance to the Holy Spirit Hospital is shown as access to the police station . The district building itself, in which the interior shots also take place, is, however, in the Berlin Adlershof studio .

In the first two seasons of the series, the team consisted of a solid base of characters. Occasionally, the supporting characters in the Wismar Revier changed or were shown alternately between the episodes in the two seasons.

From the fourth season the main characters Kriminaloberkommissar Winfried "Winnie" Scheel ( Martin Brambach ) have been replaced by Kriminaloberkommissar Sven Herzog ( Michael Härle ) and Police Superintendent Tom Friese ( Björn Kirschniok ), Police Superintendent Henner Schütt ( Kai Ivo Baulitz ) have been deleted without replacement in the series or by ZDF. At the beginning of the fifth season, the police chief Olav Hinzmann ( Kai Maertens ) dropped out or no longer represented in the team without any explanation . Police chief Lars Pöhlmann ( Dominic Boeer ) took his place . From the fourth season, Jan-Hinrich Reuter could be seen in civilian clothes instead of in protective police uniform, without there being an explanation in the series. At the beginning of the ninth season, Chief Detective Nils Theede takes the place of Herzog. During this season, police chief Lars Pöhlmann (Dominic Boeer) was replaced by Kai Timmermann ( Mathias Junge ) without further explanation . In five episodes of the eleventh season, district chief Jan-Hinrich Reuter is represented by the lecturer from the Hamburg police school Martin Boldt ( Jürgen Tarrach ), as the passionate angler Reuter goes on a long-planned fishing vacation.

During the 12th season, Chief Detective Nils Theede ( Jonas Laux ) and Poliisikonstaapeli Leena Virtanen ( Li Hagman ) leave SOKO Wismar. As a replacement for Theede, Lars Pöhlmann ( Dominic Boeer ) is returning from his training at Interpol as Chief Detective Inspector . First coming to Wismar to solve a case for the international investigative unit, he decided two weeks later to accept the position offered by his former colleagues and to return. Nils Theede follows his ex-girlfriend, who is very much in love, back to Hamburg to start all over again. This is also the first exit in the series that has taken place in the presence of the actor. Meanwhile, Poliisikonstaapeli Leena Virtanen is ordered back to Finland and replaced by the Dutch exchange police officer Anneke van der Meer ( Isabel Berghout ).

Li Hagman was the only person who appeared separately in each episode up to the 221st episode , but her exit took place in the series without the actress and was only mentioned in passing in episode 222 Undercover at the beginning of the episode. Börensen tells Reuter that it was always known that the Finnish police would eventually order Leena Virtanen back to her home country, to which he replied that he thought the Finns had long since forgotten her.

In episode 299 (season 15), Anneke van der Meer is ordered back by her Dutch boss and subsequently replaced by the Danish exchange police officer Stine Bergendal. Also in season 15, Chief Inspector Katrin Börensen leaves SOKO Wismar. In episode 300 she receives the offer to take over the position of deputy head of the internal investigation at the Federal Criminal Police Office in Wiesbaden, which she accepts in the same episode. Her place at SOKO Wismar is taken in episode 301 by Chief Detective Karoline Joost ( Nike Fuhrmann ).

For the 14th and 15th season there was the SOKO + Wismar format accompanying the respective episodes . In the approximately seven-minute episodes, senior public prosecutor Claudia Lange and lawyer Carsten Hoenig discussed the cases from a professional point of view and discussed what would actually happen to the perpetrator. The format ran on Thursday morning following the night repetition of SOKO Wismar on ZDF and was previously available in the ZDFmediathek . It was moderated by Hendrik Wieduwilt during the 14th season . In the 15th season, Sylvia Walker conducted the show.

As of April 3, 2013, a five-part crossover of all ZDF-SOKO series was produced. The teams from SOKOs 5113 , Cologne , Leipzig , Stuttgart and Wismar investigate the murder of a police officer and find themselves in a criminal environment in which their own law and order prevail. The five-part case, the trail of which stretches across Germany, was broadcast from September 30 to October 4, 2013 on weekdays on the well-known SOKO evening slot from 6 p.m.