Georg Weerth 1851. After a daguerreotype by Carl Ferdinand Stelzner 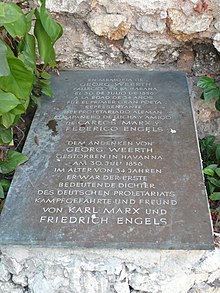 Memorial plaque for the poet in Havana

Weerth was born on February 17, 1822 in Detmold as the son of the pastor and general superintendent Ferdinand Weerth and the pastor's daughter Wilhelmina Weerth (née Burgmann). In 1836 the father suffered several strokes and was therefore no longer able to work. Weerth therefore left the grammar school in Detmold and began a commercial apprenticeship on September 16, 1838 in Elberfeld (today part of Wuppertal ) at the twist, silk and wool yarn dealer JH Brink & Co. In his spare time he learned French and English for foreign language business correspondence.

During his apprenticeship, Weerth met Hermann Püttmann (1811–1874), an editor of the liberal Barmer Zeitung , who also worked as a poet and art writer and made Weerth familiar with literature, but also sensitized him to the topic of social issues. In 1838 Weerth made friends with Ferdinand Freiligrath , whose "literary circle" he joined in the same year. This group consisted of 15 people who met regularly in Barmen to discuss literature and to recite some of their own poems, some of whom were foreign.

In 1840 Weerth moved to Cologne to manage the lead ore mines Graf Meinertzhagen, but two years later, in 1842, he went to Bonn to work in the Weerth & Peill cotton spinning and weaving mill. The company belonged to a close relative, Friedrich aus'm Weerth . In addition to work, Weerth attended lectures at Bonn University. He got to know the theologian Gottfried Kinkel and the old Germanist Karl Simrock , who organized free-thinking poets' circles. The two scientists encouraged Weerth to be literary. They met together in the Maikäferbund , a group of poets. Weerth's first poem Der Steinerne Knappe appeared in a collection of poems in 1841.

In 1843 Weerth moved to Bradford in Yorkshire (Northern England) to work there for two and a half years as a correspondent for the worsted and wool company Ph. Passavant & Co. The time there left a lasting mark on him and made him politicized. Through his friend, a doctor, John L. MacMichan, who practiced in the working-class neighborhoods, he learned about the consequences of industrialization, that is, the poverty and hardship of workers in the textile factories.

During his time in England Weerth made the acquaintance of Friedrich Engels and met Karl Marx on a trip to Belgium in the summer of 1845 . He joined the communist movement, whose worldview is reflected in his poems. The traveling salesman Weerth also worked as a courier for the Communist Correspondence Committee founded by Marx and Engels in 1846 and for the Union of Communists . "Weerth, the first and most important poet of the German proletariat," wrote Engels later.

In March 1846, Weerth was offered a position at the worsted yarn spinning mill Emanuel & Son in Brussels , which he accepted immediately. At the same time, he published a number of articles in the German Brussels newspaper . When he heard of the outbreak of the revolution in France in February / March 1848 , he traveled to Paris to experience it and to take part in it.

In April 1848 he went to Cologne with Engels and Marx to help found the Neue Rheinische Zeitung . Weerth worked as editor for Great Britain and Belgium at the newspaper headed by Marx and headed the features section . Here he published from 1848 to 1849 in continuation his satire on the nobility life and deeds of the famous knight Schnapphahnski ; Weerth used Prince Felix Lichnowsky as a template for the title character . The name "Schnapphahnski" was a bow to Heine , in whose epic Atta Troll this knight appears twice briefly. When Lichnowsky was murdered on September 19, 1848 - the first chapter appeared at the beginning of August - the Weerth brought a case of "denigration of the deceased". In January 1850 he was found guilty and sentenced to three months' imprisonment and five years for the loss of his civil rights. On February 25, 1850, Weerth began his prison sentence in Cologne.

After serving his sentence and disappointed in the failure of the revolution, Weerth did not publish anything more literary. He went on long trade trips through half of Europe (including Spain, Portugal, Great Britain, France). After his company went bankrupt , Weerth took over the Steinthal & Co. agency for the West Indies on December 7, 1852 . He moved to the Caribbean island of Saint Thomas and stayed there until June 1855. During this time, he toured the USA, Mexico, Cuba and Brazil for his company.

On June 15, 1855, he returned to Southampton ; including to propose marriage to his second cousin, Betty Tendering. When this refused, Weerth returned to St. Thomas on December 2, 1855. In March 1856 he decided to move to Havana, Cuba, and retire there. On July 23, 1856, on a business trip to Santo Domingo (Dominican Republic), he fell ill with a fever in Haiti. Although he immediately given medical attention was the attending doctor diagnosed until July 26 meningitis . Since it was very advanced and due to cerebral malaria , he could no longer be cured.

Georg Weerth died on July 30, 1856 at the age of 34 in Havana. In the Cayo Hueso district (Calle Aramburu) there has been a plaque on a wall since 1974, the only remnant of what was then the Espada main cemetery, a plaque commemorating Weerth. His literary and personal estate is divided into three archives. The most important manuscripts of the work are in the Internationaal Instituut voor Sociale Geschiedenis in Amsterdam . In 1936 they were sold there in two boxes for 5,000 marks. Some of the original manuscripts are in the Marx-Engels Institute in Moscow . These had been bought by a private citizen interested in literature and politics in the 1920s. In the Lippische Landesbibliothek Detmold, in addition to autograph poems and Weerth's personal copy of the Neue Rheinische Zeitung, several hundred original letters from the city's great son were purchased and made available to the public.