This article is about the Slovak diplomat Ján Kubiš. For the Czech resistance fighter see Jan Kubiš . 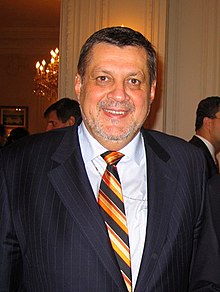 Ján Kubiš (born November 12, 1952 in Bratislava ) is a Slovak diplomat and politician . He was Secretary General of the Organization for Security and Co-operation in Europe (OSCE) from 1999 to 2005 , EU Special Representative for Central Asia from 2005 to 2006 and Slovak Foreign Minister from July 2006 to January 2009. He is currently Head of the United Nations Assistance Mission in Afghanistan and Special Envoy for Afghanistan.

After studying at the Moscow State Institute for International Relations, he began his diplomatic career in 1976. His work for the then so-called Conference on Security and Cooperation in Europe (CSCE; since 1995: Organization for Security and Cooperation in Europe, OSCE) began in 1992. During the then Czechoslovak Presidency he was chairman of the Committee of Senior Officials ). In his capacity as head of the Department for Security and Disarmament of the Czechoslovak Foreign Ministry, he was its representative in numerous negotiations. From January 1993 to June 1994 Kubiš was Ambassador of the Permanent Office of Slovakia to the United Nations Office in Geneva . From 1998 to 1999 he was the UN Secretary General's special envoy for Tajikistan and head of the UN observer mission for that country.

On June 15, 1999, he became Secretary General of the OSCE. In addition, in 2000 he took on the role of Special Envoy of the OSCE Chairman-in-Office for Central Asia . In this capacity he traveled z. B. in March 2005 Kyrgyzstan to mediate in the conflicts in connection with the change of power that took place there. In December 2001 he was re-elected for a second and final term of office as OSCE Secretary General. On July 18, 2005, Kubiš was appointed EU special envoy for Central Asia.

From July 2006 to January 2009 Kubiš, nominated by the SMER party , was Slovak Foreign Minister in the Fico government . He was succeeded on January 26, 2009 by Miroslav Lajčák . On December 19, 2008 Ján Kubiš was appointed the new Executive Secretary of the United Nations Economic Commission for Europe (UNECE). Since November 23, 2011 he has been Head of the United Nations Assistance Mission in Afghanistan and Special Representative for Afghanistan.

Kubiš is married and has one daughter.

Foreign Minister of the Slovak Republic