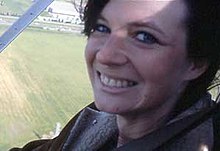 Jeana Yeager (born May 18, 1952 in Fort Worth , Texas ) is an American test pilot. She became famous for her flight on the Voyager plane.

In her youth she had a crush on horses and was fascinated by helicopters . After commuting between Texas and California at a young age , she moved to Santa Rosa , California in 1977 , where she worked as a surveyor for a local company. In the following years she acquired a pilot's license and learned to fly helicopters.

During this time she met the rocket engineer Bob Truax, who offered her a position in a private research project for an aircraft. In 1980 she met Dick Rutan and his brother, developer Burt Rutan , at an air show in Chino , California . With their planes, she set various long-distance and speed records for women, including a distance of 2000 kilometers. On December 14, 1986, she and Dick Rutan took off on the Voyager aircraft for the first non-stop circumnavigation of the world without refueling and stopping over. They flew a distance of 42,120 kilometers in 9 days, 3 minutes and 44 seconds.

In 1986 she was honored with the Presidential Citizens Medal , the second highest civil honor in the USA.

She is not related to the well-known pilot and General Chuck Yeager .