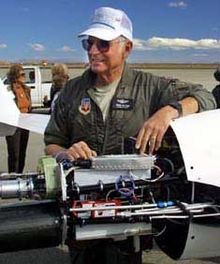 Richard Glenn "Dick" Rutan (born July 1, 1938 ) is an American test pilot . He is the brother of Burt Rutan and became famous for his non-stop circumnavigation of the world on Voyager .

In 1981 Dick Rutan left the company of his brother and founded the Voyager aircraft, Inc . He and Jeana Yeager took off together with this aircraft on December 14, 1986 for the first non-stop circumnavigation of the world without refueling and stopping over . They flew a distance of 42,120 kilometers in over 9 days, 3 minutes and 44 seconds.

Four days after this historic flight, he was awarded the Presidential Citizens Medal of Honor by then President Ronald Reagan in a special ceremony.

He lives with his wife in Lancaster , California and has two daughters and four grandchildren.