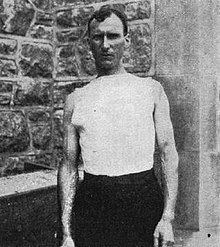 Hicks, who was born in England , was the winner of an extraordinary marathon at the St. Louis Summer Games . Before he reached the finish, his competitor Frederick Lorz had run into the stadium after getting into a car at kilometer 14 with a muscle cramp (caused by dehydration ) and only starting again shortly before the finish because the car made one Engine failure and he didn't want to wait in the sun. Lorz was hailed as a winner until he admitted he was joking. Like the other two US Olympic marathon champions, Hicks was not the first runner to enter the stadium and still won.

Hicks' run gives an impressive insight into the sports medicine knowledge of the early 20th century. At 24 km he asked for some water, but was only allowed to rinse his mouth with distilled water . Three kilometers later he was given a milligram of strychnine - an analeptic that is now on the doping list - with an egg white (raw protein). This procedure was repeated at kilometer 32. This time there was an egg more and a sip of brandy . In addition, his whole body was rubbed with warm water. On the last mile, he got two more eggs, some more brandy, and the bath was repeated. On that day, temperatures of 28 ° C prevailed in the shade and the route was mostly in the sun.

The description of the care of the runner comes from an essay by Charles P. Lucas, the coach of Hicks. He justified the victory of Hicks over the stronger competition with the right care ("... but they lacked proper care on the road ...").

In his later years, Hicks moved to live with his brothers in Canada and was naturalized there.