Wanjiru at the 2007 world record run in The Hague 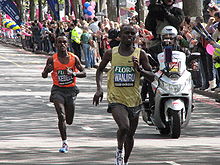 In 2003, the long-distance runner came to Japan , where he was accepted at Sendai Ikuei Gakuen High School in Sendai because of his running talent and successfully participated in Ekiden competitions. In 2005 he graduated from school there.

In the same year he won the Sendai half marathon in 59:43  minutes and set the current junior world record in the 10,000-meter run on August 26 in Brussels with 26: 41.75 minutes . Shortly afterwards he broke Paul Tergat's seven-year-old world record (59:17 min) in the Rotterdam half marathon with 59:16 min .

After a relatively unsuccessful year in 2006, on February 9, 2007, at the RAK half marathon with 58:53 minutes, he won back the world record that Haile Gebrselassie had snatched from him the year before with 58:55 minutes. On March 17, 2007, he ran the 21.1 kilometers at the CPC Loop The Hague in 58:33 minutes, improving his record time by another 18 seconds - and at the same time setting the old world record with his 20-kilometer split time (55:31 minutes) from Gebrselassie over this distance (55:48 min).

A malaria disease infection threw it back soon thereafter. He renounced a start at the World Athletics Championships in 2007 and only came in 51st place at the 2007 Road Running World Championships in Udine.

When he made his debut on the marathon route in December 2007, he was in top form again: at the Fukuoka Marathon , he set a course record of 2:06:39  hours . At the London Marathon 2008 he was second behind his compatriot Martin Kiptoo Lel in 2:05:24 h. He was then nominated for the 2008 Olympic Games marathon by the Kenyan Athletics Federation.

In Beijing, despite the warm weather, he managed to keep the same pace as in his previous marathons. At km 37 he shook off his last pursuer, the two-time world champion Jaouad Gharib . At 2:06:32 h, Wanjiru stayed almost three minutes below the Olympic record set by Carlos Lopes in 1984 and became the first Kenyan Olympic marathon champion.

In 2010 he finished second in the Mardi Gras Marathon half marathon , beaten by Lel. At the London Marathon, he gave up after 27 kilometers due to knee pain. In the fall he managed to defend his title in Chicago, where he prevailed in a dramatic finish against the London winner Tsegay Kebede .

Samuel Kamau Wanjiru was 1.63 m tall and weighed 52 kg. Until 2008 he started for the athletics team of Toyota Motor Kyushu (a based in Kyushu wholly owned subsidiary of Toyota ), where he was trained by Kōichi Morishita , the winner of the silver medal in the 1992 Olympic marathon. His manager was Federico Rosa. Wanjiru's cousin Joseph Muriithi Riri is also a world class marathon runner.

On May 15, 2011, after a violent argument with his wife, he fell from the balcony of his apartment and sustained a fractured skull and other serious injuries, from which he died shortly after being admitted to the hospital. According to the Kenyan police, it was a suicide . The exact circumstances of his death are still unclear despite an autopsy. His mother Hanna Wanjiru assumes a murder and invokes one of the autopsy pathologists, who attributes the death to a serious head injury that was inflicted with a blunt object. There is no official result of the investigation.

Wanjiru was married to the Kenyan singer Triza Njeri until his death. This reported him in December 2010 for attempted murder, but later withdrew the report. He is said to have threatened her and his bodyguard with a Kalashnikov during an argument . His wife later withdrew that complaint but filed for divorce. Most recently, he was investigated for illegal possession of weapons. A trial was imminent.