Spyridon Louis ( Greek Σπυρίδων Λούης , nickname also Spyros ; *  January 12, 1873 in Maroussi near Athens ; †  March 26, 1940 there ) was a Greek long-distance runner and the first winner of the marathon specially created for the Olympic Games in Athens in 1896 . 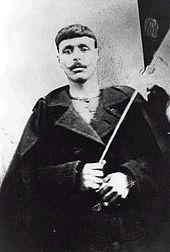 Louis at the Olympic Games in Athens

The son of a farmer was a water carrier by trade. He was asked by Papadiamantopoulos, his commanding officer during his military service, to take part in a preparatory run that took place about two weeks before the Games. There, Louis finished fifth in a time of 3:18:27 h (winner time: 3:11:27 h) and was now one of the thirteen Greek runners who were supposed to uphold the honor of the host country in the run from Marathon to Athens The course of the games was still without a victory in the athletics competitions . Four foreign participants competed against them, of whom only the Hungarian Gyula Kellner had run the long distance before. Three of the four foreign participants, successful middle-distance runners, quickly took the lead after the start, but gave up at 23, 34 and 37 kilometers. At 33 km, Louis had overtaken the last of the three, the Australian Edwin Flack , and took the lead.

Drinks that had already been prepared were allowed during this run, which the Greeks also made use of. The official report states:

"When Spyros Louis from Maroussi comes to an inn in Pikermi, he has a glass of wine, inquires about the leading runners and assures with certainty that he will reach them and overtake them."

Louis 'grandson denies this version, but claims that Louis' future father-in-law handed him a glass of cognac 10 km from the finish line.

Between kilometers 20 and 30, the Frenchman Albin Lermusiaux and the American Arthur C. Blake had to give up because they were too fast. Only Flack was up to 33 kilometers ahead of Louis, but then also suffered a faint attack and dropped out of the race. The way was now clear for Louis, who won the marathon eight minutes ahead of his compatriots Charilaos Vasilakos and Spyridon Belokas . On the last lap in the newly built Olympic Stadium in Athens , he was accompanied by Crown Prince Konstantin and Prince Georg . The only remaining foreigner, Gyula Kellner, first crossed the finish line in fourth, but was placed in third place after the disqualification of the third, who had covered a section by cart. Spyridon Louis needed 2:58:50 hours for the 40-kilometer route.

National hero after the victory

Louis was now a national hero. How many of the previously offered gifts he actually received is unclear. He received a small piece of land and a modest pension from his home village, to which he withdrew. His grandson had a silver cup, which he received as a prize, auctioned at Christie's in London in April 2012 ; it was purchased from the Stavros Niarchos Foundation for £ 541,250 .

He never took part in official competitions after his Olympic victory. In 1926 he was arrested on charges of forging military documents, but acquitted after more than a year in prison. He made his last public appearance as a guest of honor at the 1936 Olympic Games in Berlin . Almost four years later he died of a heart attack at the age of 67. Some of the last photos of the Olympian can be found in a travel report by the German journalist and writer Lutz Koch (1903–1965), who visited him in his home village in 1940.

Guest of Honor in Berlin

Spyridon Louis received the last major public honor in his sports career in Germany at the 1936 Olympic Games in Berlin . At the suggestion of the sculptor Arno Breker, he came to the Reich capital as the guest of honor of the German government. The Greek delegation with the Crown Prince and the top athlete was received and honored by Adolf Hitler. During the Summer Games, Breker created a portrait of Spyridon Louis, who came to the 36-year-old artist's studio in Greek national dress for over a week to sit as a model.

Posthumous honors have since been given in many places. Numerous sports facilities and sports clubs in Greece and the rest of the world are named after him, including the Olympic Sports Complex in Athens and the Spiridon-Louis-Ring in Munich's Olympic Park .

On the 75th anniversary of his death in 2015, Greece issued a 2 euro commemorative coin .