Son Kee-chung , known by his Japanese name Son Kitei (born August 29, 1912 in Shingishū , then Japanese Empire , then North Korea ; † November 15, 2002 in Daejeon , South Korea ) was the first Korean-born medalist in 1936 together with his teammate Nan Shōryū at Olympic Games .

Son Kee-chung was born in a small mountain village near the Yalu River on what is now the border between China and North Korea . In the hilly, impassable terrain, he developed into a talented runner. Son lived at the time when Korea was a province of the Japanese Empire with the Japanese name Chosen . Although his parents called him son Kee-chung , due to the alignment policy of the Japanese regional government, he was forced to use the Japanese pronunciation of his Kanji / Hanja in his name ( Japanese 孫 基 禎 , Son Kitei ) during public appearances . He received his education at Yangjung High School and Meiji University . In 1935 he ran a world record in Tokyo with 2:26:42 in the marathon and took part in the 1936 Olympic Games in Berlin the following year . The patriotic son refused to sign his Japanese name during the 1936 Olympic Games, ran a new Olympic record on August 9, 1936 with 2: 29: 19.2 hours and was over two minutes ahead of Brit Ernie Harper's Olympic champion. Here, Sohn behaved tactically wisely by letting the Argentine Juan Carlos Zabala (Olympic champion 1932) pull up halfway through the race, until Sohn increased the pace, distanced Zabala and Harper by several minutes and took victory safely. After the victory, Sohn emphasized that his victory was due not only to physical endurance but also to mental willpower: “The human body can only achieve something to a certain extent. After that, mind and heart have to take over. "

When the flag of Japan was hoisted instead of the former Korean flag at the winner 's ceremony, his son and compatriot Nam Sung-yong (who won bronze under the Japanese name “Nan Shōryū”) demonstratively averted their gaze. Various sports journalists described this sight as the saddest winning photo in Olympic history. Sohn's victory was used in Chosen for separatist propaganda, so that all celebrations in honor of the Olympic winners in Chosen were banned. After his Olympic victory, son Kee-chung was under constant surveillance and was no longer allowed to run marathons during the Japanese rule. Son appeared for this in the film Olympia by Leni Riefenstahl , where Harper and he could adjust scenes of their marathon. 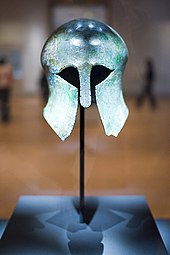 The Olympic champion in the marathon was to receive an antique bronze helmet in Corinthian style in 1936, which was probably excavated under Ernst Curtius in Olympia in 1875. Since it was against the rules of the IOC to award athletes with items other than medals, the helmet went to a Berlin museum until almost 50 years later the Greek daily Vradini researched the story and asked for a subsequent award to son Kee-chung. This happened in 1986, a year later the helmet was declared " Korean National Treasure No. 904 " and has been in the Korean National Museum ever since .

After his running career, son worked as a trainer. Among other things, he looked after Suh Yun-bok , winner of the Boston Marathon in 1947 , Ham Kee-yong , winner of the Boston Marathon in 1950, and Hwang Young-Cho , winner of the marathon gold medal at the 1992 Olympic Games . At the 1948 Olympic Games, Sohn himself was given the honor of carrying the flag of the newly founded state of South Korea. Eventually, Sohn became chairman of the "Korean Sports Association". When the Olympic Games were held in his home country in 1988 , Sohn carried the Olympic torch into the stadium when it opened . The Korean spelling Son Kee-chung was also used here. Son published his memoirs in the autobiography My Fatherland and Marathon ( Kor. 나의 조국 나의 마라톤 ). Son was awarded the Korean Medal of Merit ( 국민 훈장 , 國民 勛章 ). When his student Hwang won the first “real” marathon gold medal for South Korea in 1992, his son said he could finally die in peace. Hwang took the emerging political sharpness out of the game by noting that his winning shoes were Japanese-made.

Sohn Kee-chung died on 15 November 2002 at the age of 90 years at a pneumonia and was on the national memorial cemetery Daejeon buried. After his death he was awarded the Cheongryong Medal and the Blue Dragon Order . The son Kee-jung-Park was created in his honor .

There is still some uncertainty about the spelling of his name. On the winners boards in the Olympiastadion Berlin the winner of the marathon is indicated as "Son (Japan)", and the IOC also introduces its official biography with the Japanese name Son Kitei or Kitei Son , but emphasizes that the name was imposed, and otherwise calls him son Kee-chung .