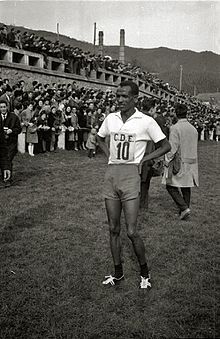 Wolde had already participated in the Olympic Games in Melbourne in 1956 , but had failed in the 1500-meter run in the preliminary run. At the Olympic Games in Tokyo in 1964 , he finished fourth over 10,000 meters with his personal best of 28: 31.8 minutes. He started the marathon with his brother Demissie Wolde , but gave up.

After Abebe Bikila won the Olympic marathon twice in a row in 1960 and 1964, Wolde won the third gold medal for Ethiopia on this route in Mexico City in 1968 . The favorite Bikila had to give up the race after a hip injury and a fracture of the fibula and had sworn him to claim the third Ethiopian victory in a row in the marathon. Wolde had previously won the silver medal over 10,000 meters.

Four years later, Wolde won his third Olympic medal at the 1972 Olympic Games in Munich at the age of 40, finishing third in the marathon with his personal best of 2:15:09 hours.

Wolde was a national hero in Ethiopia, his fame saved him from being murdered like many of his compatriots at the beginning of the military dictatorship of Mengistu Haile Mariam . After the end of the Mariam dictatorship in 1991, Mariam sympathizers were arrested from 1993, including Wolde. He was accused of being a collaborator with Mariam and murdering a 15-year-old boy. He reported that as a member of the Army, he had been asked to fire another shot after another officer's fatal shot at the boy, but he had deliberately missed. He was sentenced to six years' imprisonment for the offense in early 2002, but was immediately released as he had already spent nine years in prison by then. Previously, many Olympians had campaigned around the world to seek his release. Shortly after his release, Wolde died of chronic liver disease at the age of 69 . Woldes and Bikila's tombs were destroyed by strangers in March 2007, along with many other Ethiopians, Haile Gebrselassie also expressed his mourning over the desecration of the tomb.