Abebe Bikila was born in 1932 in Jato (approx. 130 km northeast of Addis Ababa). In 1944 he graduated from the traditional Ge'ez school. At the age of 20 he was employed by the imperial bodyguard. At the age of 22 he married Yewibdar Giorghis, with whom he had four children. His athletic talent was discovered late, on the occasion of a parade in front of Ethiopian athletes who were to take part in the 1956 Olympic Games in Melbourne . 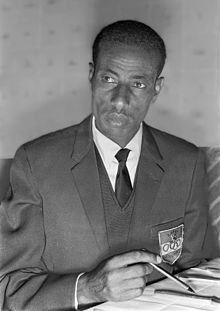 At the national military championships he had his first surprise success in 1956 when he defeated Wami Biratu , who at the time held the records for 5000 and 10,000 meters in Ethiopia . But Bikila soon broke these national records too. With his impressive results, he qualified for the 1960 Olympic Games in Rome . With 2:15:16 h he won the marathon there in a new world record and the first Olympic gold medal for Ethiopia in the history of the Olympic Games, where he was the only athlete to cover the distance barefoot . His shoes, which he brought from Ethiopia, are said to have worn out too much and all the shoes that were available in Rome did not seem to fit properly. That's why he decided to walk barefoot, just as he had done all his life in Ethiopia. Subsequent studies by his Finnish trainer Onni Niskanen have shown that the Ethiopian could actually run faster without shoes. Nevertheless, to this day it is occasionally claimed that Abebe Bikila only walked barefoot to point out the living conditions in Ethiopia to the western world.

At the 1964 Olympic Games in Tokyo , he repeated his success from 1960, albeit with shoes, and again set a world record with 2:12:11 h, even though he had to undergo appendectomy six weeks before the race . This made him the first runner to win a repeated marathon victory at the Olympic Games; only Waldemar Cierpinski has been able to celebrate such a double triumph since then. Immediately after the race, Bikila demonstrated a loosening and stretching program and explained that he could have run two minutes faster.

His attempt to win a third gold medal at the 1968 Olympic Games in Mexico City failed because he had to stop the race after 15 km due to a fatigue fracture . In his career, Bikila competed a total of 26 marathons. 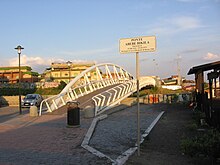 Bikila had been paralyzed since a car accident on March 22, 1969. He was treated for nine months in Ethiopia and abroad. Even when he was dependent on a wheelchair, he did not lose his athletic ambition. In 1970 he took part - actually invited as a spectator - in a sled race in Norway, where he won gold over 25 km and over 10 km. He also took part in the 1970 World Games for the Disabled in archery and came in 9th there.

Abebe Bikila succumbed to a cerebral haemorrhage in 1973 , which was still related to his accident. 65,000 people attended his funeral, and Emperor Haile Selassie declared an official day of mourning. Bikila's final resting place was the cemetery of St. Joseph Church in Addis Ababa.

In Bikila's honor, a stadium in the Ethiopian capital was named after him. In Italy , a bridge in Ladispoli , Province of Rome, was named after the successful athlete. In 2012 he was inducted into the IAAF Hall of Fame . In Spain a sports retail chain has named itself after Bikila; according to her, the name should be protected as a trademark.