Juho Pietari "Hannes" Kolehmainen  [ ˈhɑnːɛs ˈkɔlɛhmɑi̯nɛn ] (actually Johan Petteri Kolehmainen , born December 9, 1889 in Kuopio ; † January 11, 1966 in Helsinki ) was a Finnish long-distance runner . He was the first of a generation of top Finnish runners and was nicknamed the Flying Finn . Kolehmainen comes from a sporty family. His brothers Willy and Tatu were also strong long-distance runners who made their living as professional runners in the USA. Hannes was strongly influenced by their training.

Hannes Kolehmainen was one of the most successful athletes of the 1912 Olympic Games in Stockholm with three gold and one silver medal . Kolehmainen achieved the most outstanding performance in the 5000 meter run . There he fought an exciting fight with the Frenchman Jean Bouin . After both were at the head of the field together for almost the entire race, Kolehmainen left his competitors behind in the last few meters and won in the new world record time of 14: 36.6 minutes. Kolehmainen also won over 10,000 meters and in the cross-country run over 12,000 meters. In addition, he and the Finnish team, in which Jalmari Eskola and Albin Stenroos competed alongside him , won the silver medal in the team classification of the cross-country run. With the victory over Bouin, the specific long-distance training prevailed because, according to George Hebert, Bouin had also done a lot of general athletics in addition to endurance, while Kolehmainen trained significantly more and at racing speed.

Although Finland started with its own team, it was still part of Russia at the time, which is why the Russian flag was also hoisted at the winning ceremony. Kolehmainen is quoted as saying that at that moment he "almost wished he hadn't won" . 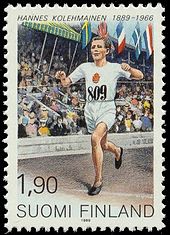 Finnish postage stamp from 1989 for the 100th birthday of Kolehmainen

Kolehmainen's sporting career was interrupted by the First World War. However, he remained one of the strongest runners in the world, especially in the long distances. At the 1920 Olympic Games in Antwerp , the first after the end of the war, Kolehmainen won his fourth Olympic gold medal in a marathon .

Kolehmainen also took part in the marathon at the 1924 Olympic Games in Paris , but did not finish the race. At that time he had already found a worthy successor from his own country in Paavo Nurmi .

When the Olympic Games were held in their home country in 1952 , the 62-year-old Kolehmainen and Nurmi were invited to light the Olympic flame together. 14 years after the Helsinki Games , Kolehmainen died at the age of 76.

Olympic champion in the 5000 meter run

Olympic champion in the 10,000 meter run