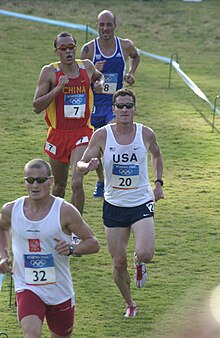 Cross-country running has been held for some time after the end of the athletics season in the winter months. For decades, cross-country running was popular and welcome as preparation for the coming running season. The championships in Germany began in February at the state level, increased into March at the federal level, the European championships, and finally the world championships. For some years now, however, the order has been reversed. In November, actually the classic month of relaxation in athletics, international championships take place, while the German championships are mostly held in March.

The route must be in an open or wooded area, covered with grass if possible and provided with natural obstacles that should not endanger the runner (no deep ditches, steep ascents and descents or high walls). The runs usually take place on a circular course from 1750 m to 2000 m in length.

The Orienteering is a special type of cross run, are to be run at the preset on a map checkpoints in the area. The athlete himself chooses the route. A more demanding variant with obstacles is the extreme obstacle course . The cross-country race is also a sub-sport of the tournament dog sport a 5 km stretch of 2 km or. Occasional stadium cross competitions take place. The run does not only take place on the running track, but can also go up and down across the meadow, through the long jump pit, grandstand steps or embankments. Often other obstacles are also laid out. The distance is usually between 600 and 2000 meters.

Cross-country running was (probably) first played as a competitive sport in 1837 as a public school sport. On December 7, 1867, English championships were held for the first time on Wimbledon Common. Cross-country running was an Olympic discipline from 1912 to 1924 (Olympic champion, among others, 1920 and 1924 Paavo Nurmi ) and it is still a sub-discipline of modern pentathlon today. The oldest national cross-country championships on the continent took place in Belgium in 1896.

The word creation "Crosslauf" is a partial translation of the English "cross country run", actually in German: Querfeldein-Lauf. So it is etymologically an Anglicism. In the first decades of the cross-country run, it was called the forest run in Germany because the routes mostly ran through forest areas.

The Ukrainian Serhij Lebid is not only the most successful starter with nine wins so far, he is also the athlete with the most starts with 19 competitions between 1994 and 2012.

At the German Athletics Championships , the discipline of cross-country running, including forest running, was part of the program for the first time as early as 1913 - in those years only for men. Due to the war, there were no forest running championships from 1915 to 1918. From 1937 to 1946, the forest run was also not held at the German championships , but since 1947 it has been in the championship offer again. In 1957 the discipline was also included in the program for women. Since 1961 there have been two routes for men, a medium and a long distance. For women, a second route was added in 1970, but it has been canceled since 2002. Due to the fact that the route conditions and conditions are not comparable, the times achieved are not given here.

German championships have existed for men since 1913; for women they were held for the first time in 1957. For men, there has been a long distance with a length of around 10 kilometers and a medium distance of 3 to 4 kilometers since 1961. The women run about 6 kilometers. There has also been a team evaluation since the first German forest running championships . This made cross-country running the first athletic discipline in which there were team champions.